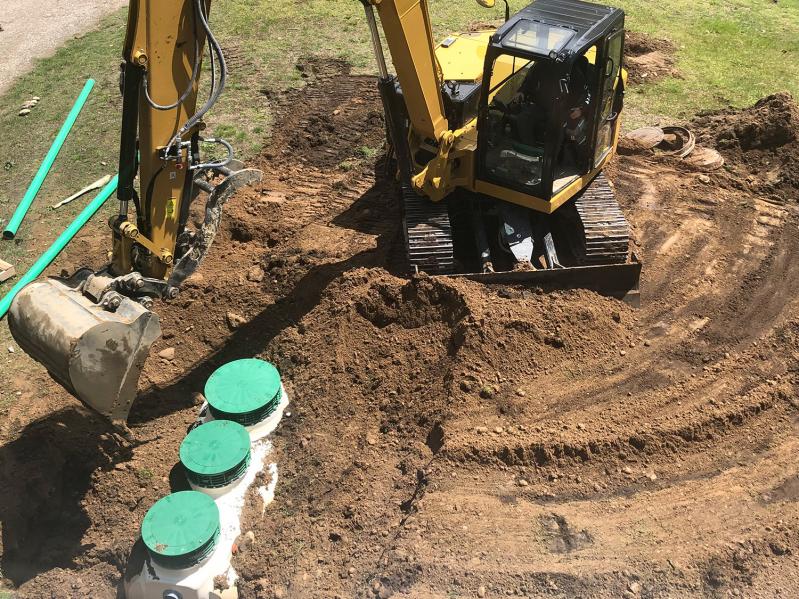 Suffolk County’s Septic Improvement Program grants have been awarded to homeowners to replace aging systems with nitrogen-reducing ones in the hope that the upgrades will benefit water quality.
Carissa Katz
By Christopher Gangemi

After years of advocacy, Suffolk residents who took advantage of county Septic Improvement Program grants to replace their aging systems with a low-nitrogen variety will no longer need to claim those grants as taxable income, and those who were taxed for them in the past will be able to recoup their payments.

Suffolk County Legislator Bridget Fleming said the Internal Revenue Service’s reversal on the taxing will help accelerate the conversion of old septic systems to more environmentally-friendly ones. “We’ll see an extremely successful program get supercharged now that it’s a straightforward incentive,” she said.

Since 2017 when the program was enacted, the county had received 3,583 applications for the grant and there have been 1,277 installations of low-nitrogen, innovative/alternative systems, according to Senator Chuck Schumer’s website. Some 350,000 homes in Suffolk are not connected to a sewer system and rely on cesspools and septic systems. Many of these old systems discharge high quantities of nitrogen into the surface water, such as ponds and bays, as well as into the groundwater, which eventually drains into drinking water.

But I/A systems are expensive. Quackenbush Cesspools in East Hampton, listed on the county’s list of approved installers, says on its website that “homeowners are receiving anywhere from $20,000 to $45,000,” in combined grant money from the state, county, and town programs. In some instances, the grants cover the majority of the installation cost. They are paid directly to installers, who report them as business income.

However, in early 2019 John M. Kennedy Jr., the Suffolk County Comptroller, who was eyeing a run against Suffolk County Executive Steve Bellone, asked the I.R.S. for a private letter ruling on whether he should be sending 1099 forms to residents who had received the county grants. One of his concerns, he told The Star at the time, was that 1099 payments might not comply with I.R.S. rules because they could constitute a disbursement of public funds for “private benefit.”

Supporters of the program disagreed. It had been designed to incentivize homeowners to do something for the greater environmental good, and paying a surprise tax on $20,000 or $45,000 was no small thing. What’s more, with the installers also paying tax on some grants, they were essentially being taxed twice.

The county executive’s office asked the I.R.S. for the opportunity to comment on Mr. Kennedy’s submission, which it described as grossly inaccurate.

The I.R.S. allowed the comptroller’s office to send the 1099s to grant recipients, but indicated that if the United States Department of Agriculture were to designate the grants as cost-sharing measures with region-wide environmental benefit then the I.R.S. could find that they were not taxable.

Two weeks ago, that’s how Tom Vilsack, the Secretary of Agriculture, ruled, and on Friday, the I.R.S. agreed with Mr. Vilsack.

According to the Federal Register, the official journal of the government, “The Secretary’s determination permits recipients of cost share payments to exclude such payments from gross income to the extent allowed by the I.R.S.”

County Health Department for their “tenacity” in pushing the change.

“We’ve finally gotten justice for folks who are just trying to do the right thing, improve our local water. It’s important and reassuring to see that this kind of commitment can get a good result for the environment and taxpayers,” she said.

“It’s exceptionally good news,” said East Hampton Town Supervisor Peter Van Scoyoc. “The tax was an additional expense to folks. But the grant was set up to eliminate expense and incentivize conversion.”

There was bipartisan support for the change. Representative Lee Zeldin, in his last month as congressman, said in a statement, “This decision from the I.R.S. is the correct and just policy, and is a huge victory for Suffolk County taxpayers. Saddling Long Islanders with an unexpected bill come tax season was always unacceptable.”

Mr. Zeldin co-sponsored legislation introduced in April to provide an exclusion from gross income for wastewater management subsidies. The legislation was never passed.

“I think we’re going to see even more applications for these systems now that they’re tax-exempt, which has always been our goal,” said Mr. Van Scoyoc.

“It’s such an outrageous thing that it ever happened,” said Ms. Fleming. She said reporting the grant money as income, in some cases, pushed residents into a different tax bracket.

“They need relief as well.”

Now, those who paid in the past will be able to file a 1040-X form to amend past returns and get their money back.