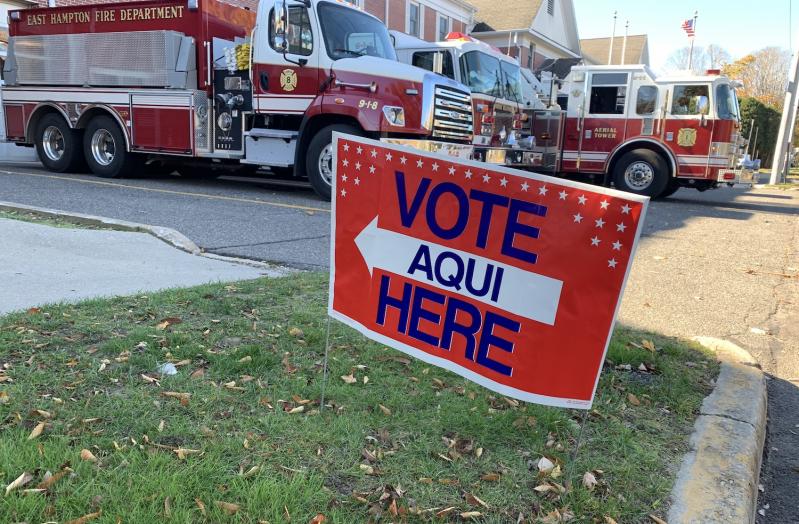 Election Day in East Hampton, where voters in some districts cast ballots at the Emergency Services Building on Cedar Street.
Durell Godfrey
By Christopher Walsh

As New Yorkers went to bed on election night the ABC and NBC news networks were projecting that Gov. Kathy Hochul had won her race against Representative Lee Zeldin of New York's First Congressional District, although only 1 percent of votes from Suffolk County, a stronghold for the Republican and Conservative Party challenger, had been counted.

Shortly after 11 p.m., NBC projected the race for the governor, and ABC followed soon after. Although Ms. Hochul, the former lieutenant governor who was elevated to the top spot in the wake of Gov. Andrew M. Cuomo's resignation in 2021, was comfortably ahead of Mr. Zeldin for most of the campaign, the race tightened significantly in the closing weeks.

The governor spoke to supporters in Manhattan after the networks called the race. "Together, we will ensure our values are put to work to lift up all and leave no one behind,” she said, "building a state where we can afford to raise our families, where we create good paying jobs in the industries of tomorrow -- from Long Island to N.Y.C., to Syracuse to Buffalo, where we expand safe, decent housing for all, where our kids succeed in school and reach their full potential, where we live without fear, safe in our neighborhoods and our subways with illegal guns off our streets, where our fundamental rights are protected and women can make decisions about our own bodies."

The Suffolk County Board of Elections website had posted no results as of 11:30 p.m. on Tuesday, and the New York State Board of Elections site had no results listed for Suffolk County either, the lack of online reporting likely the result of a September malware attack that crippled the county's computer systems. The County Board of Elections sent 48,635 mail ballots to voters, and had received 32,167 as of Monday. Mail ballots had to be postmarked by Tuesday, Nov. 8, and must be received by the board of elections by Tuesday, Nov. 15, in order to be counted, so an official tally is several days to several weeks away.

Results in the race for the First Congressional District, State Senate, and Assembly as well the county races and propositions on the ballot here had not been posted by midnight.

Votes cast during the early voting period, Oct. 29 through Sunday, were to be tallied and made public after Tuesday's 9 p.m. close of polling stations. They were scanned as they were received, a board of elections official told The Star on Tuesday, but would not be tallied until after the polls closed.

A host of government functions and policies hinge on the contest, including gun policy, criminal justice, and abortion rights, though Mr. Zeldin downplayed any influence he could have had on the latter. His focus was on violent crime, which he made a centerpiece of his campaign. A shooting near his Shirley residence last month underscored his message.

Attorneys for the family of a man shot and killed by New York City police officers in 2018 issued a cease-and-desist letter over one of Mr. Zeldin's campaign advertisements that depicts the man's final moments. The ad claims to show "actual violent crimes caught on camera in Kathy Hochul's New York," though the incident occurred three years before she became governor.

Mr. Zeldin's campaign is also under investigation by the New York State Board of Elections regarding potential violation of state law for coordinating with two political action committees supporting his candidacy. And the cosmetics heir Ronald Lauder, who owns an estate in Wainscott, has emerged as a lead donor to those organizations, known as superPACs, spending more than $11 million to elect Mr. Zeldin, The New York Times reported this week.

Mr. Lauder is an opponent of the plan to land the South Fork Wind farm's export cable in Wainscott, a project Governor Hochul supports. She was among the officials taking part in a ceremonial groundbreaking for the wind farm at LTV Studios in Wainscott in February.

While most polls showed the governor, running on the Democratic and Working Families Party lines, leading her Republican and Conservative Party challenger, the race tightened considerably in the campaign's closing weeks, with Mr. Zeldin predicting a "red tsunami" that would sweep him into office amid midterm elections that almost always favor the party that does not control the White House. A handful of polls put Mr. Zeldin ahead of or tied with the governor, but Ms. Hochul never trailed in the majority of polling firms' prognostications.

The candidates disagreed on virtually everything in their sole debate on Oct. 25. The governor repeatedly tied the congressman to Mr. Trump and the effort to overturn his 2020 election defeat, while Mr. Zeldin, who would not utter the former president's name, called Ms. Hochul pro-criminal and corrupt.

Mr. Zeldin supported Mr. Trump's attempts to subvert democracy after his 2020 defeat, voting against certifying the election results in two states on Jan. 6, 2021, hours after the insurrection at the United States Capitol encouraged and cheered by the defeated former president. Previously, he defended Mr. Trump through two impeachments and, in December 2020, filed an amicus brief supporting a lawsuit that asked the Supreme Court to disenfranchise some 20 million voters in four states won by President Biden.