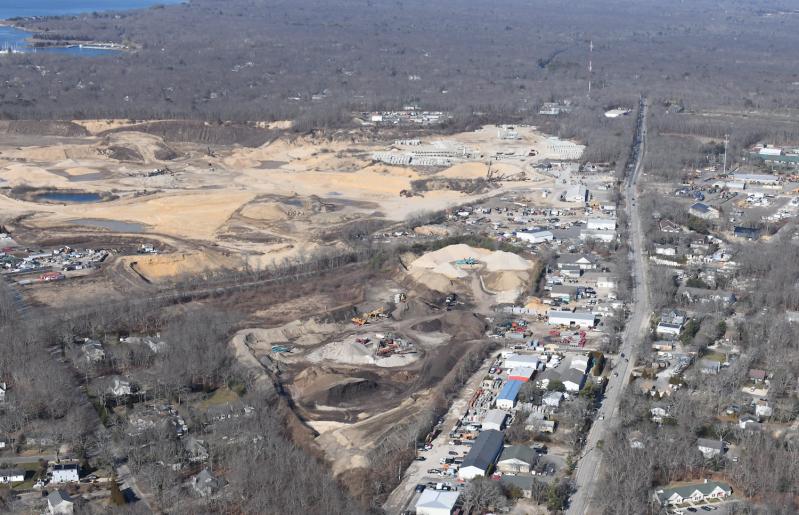 An aerial view of the Springs Fireplace Road corridor in 2020.
Doug Kuntz
By Christopher Walsh

For the second time in just under a year, the East Hampton Town Board held a public hearing on a proposed law that would give the town regulatory powers over mining, mulching, and composting operations and require the monitoring and reporting of the impact of such operations on groundwater.

The board did not take action following last December’s hearing, but as at that time, representatives of local businesses engaged in such operations pushed back on the need for such a law and implied that it would not withstand a legal challenge.

The law as proposed would require such facilities to submit work plans to the town’s Natural Resources Department to install monitoring wells and test and report on groundwater sampling for a long list of substances under chemical analysis, or analytes, including volatile organic compounds, metals, perfluorinated chemicals, pesticides, acids, and others.

At last year’s hearing, environmental advocates strongly supported the proposed law, stating that it would help to protect Long Island’s sole-source aquifer. They cited a 2016 report by the Suffolk County Health Department on groundwater sampling conducted in the vicinity of vegetative organic waste management facilities, which confirmed “the prior observation of elevated metals” and “atypical elevated concentrations of radiological parameters” in groundwater downgradient of such facilities.

Also cited at last year’s hearing was the Health Department’s 2018 report on the Sand Land mine in Noyac, which concluded that mining and waste processing operations at that site were responsible for significant adverse impacts to groundwater, including exceptionally high metal concentrations, manganese over 100 times the drinking water standard, and iron 200 times the drinking water standard. The impacts were found at over 150 feet of depth into the underlying aquifer.

As they had last year, Paul Sharlow, an attorney, and Kris Almskog, a geologist, addressed the board on behalf of clients including the Bistrian Gravel Corp., Sand Highway, and Bistrian Materials. “My clients are not opposed to collecting and analyzing the science, nor going above and beyond when it comes to implementing environmental controls at their sites,” Mr. Sharlow said. Rather, their opposition is “about making sure that what you’re asking for in your law is not redundant or irrational.”

Despite requests, the town has not engaged with the industry or its experts, he said. “Instead, you expanded your analyte list to include everything under the sun, including emerging contaminants.” The New York State Department of Environmental Conservation, he said, does not require sampling for emerging contaminants at mine sites on Long Island “because it just simply doesn’t make sense.” Emerging contaminants have been determined to come from “fire departments, paper mills, and aviation operations, to name a few,” he said, “not mining activities.”

Where the town argues that data are not available in a timely manner, the D.E.C. would provide them on a continual basis if the town would request it under the Freedom of Information Law, he said. His clients would as well, he added.

The list of analytes to test for has been expanded to include those “with absolutely no relation to these facilities whatsoever,” Mr. Sharlow said. “So what are you going to do if you find these types of analytes at these operations?” By requiring such tests, “you’re outside of your legislative authority.”

Seeking input from the D.E.C. and the County Health Department, Mr. Almskog told the board, “would probably go a long way in making the legislation strong, and not redundant to what’s being done out there.” A Health Department study of the Springs-Fireplace corridor “saw no impact” from mining or mulching activities “that were negatively impacting groundwater in this area.”

The analyte list includes many compounds for which the state has no standard, he said, so if they are detected, “it’s very hard to tell the public what that means.” Some are naturally occurring, he said. Further, his firm, P.W. Grosser Consulting, has been unable to find a laboratory that will certify the entire list of analytes. “That represents another problem for the industry — if they were to do this and give you the data, the data could be called not useful, not valid. . . .”

Mr. Almskog also argued that “something like this could cause hysteria” and for some facilities to be shuttered, the result being “thousands more trucks on the road coming and going because these facilities out here are a local source of aggregate” for all manner of construction and infrastructure projects.

Their clients, he continued, perform “some of the best management practices and they’re actually applauded by D.E.C. for some things they do at their facilities as far as engineering controls.”

But Frank Riina, a Springs resident, called to support the proposed legislation, which he said “is not designed to be accusatory. Rather, it will ask questions and seek data in order to facilitate smarter and more appropriate decisions. It’s a prudent approach to protecting our water resources because it uses science and removes any assumption of no harm being done.” He implored the companies “to embrace it, don’t litigate it.”