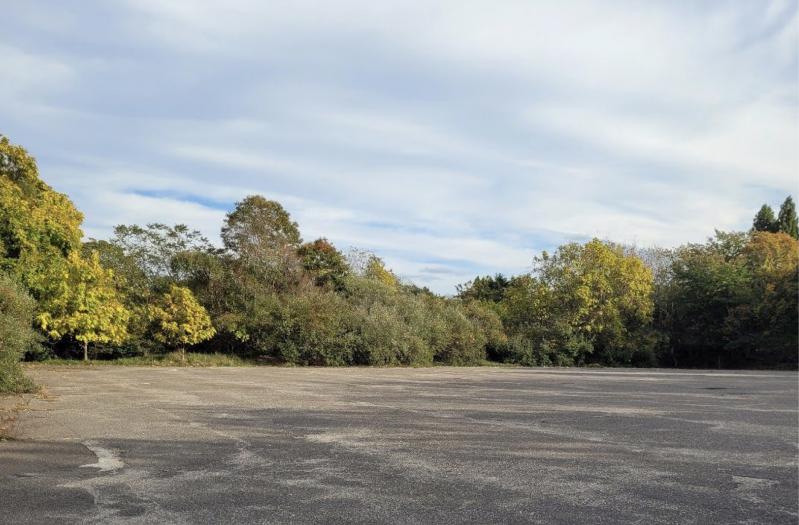 All that remains of the long-gone Stern's Department Store at 350 Pantigo Road in East Hampton is the paved parking lot.
Town of East Hampton
By Christopher Gangemi

A proposal to subdivide the long-vacant former Stern’s Department Store property on Pantigo Road in East Hampton into three house lots has raised the question of whether the site might be better used for affordable housing, and with an apparently willing seller open to discussions, the town planning board agreed on Nov. 16 to let the town board know it was unanimous in support of that option.

“I think the property calls out for it,” said Samuel Kramer, the planning board’s chairman.

Greg McCord of San Francisco, a principal of 350 Pantigo, the limited liability company that has owned the former Stern’s site since 2019, has submitted plans to divide the roughly four-acre parcel into three lots, each about an acre, with a reserved area of just over a third of an acre. Mr. McCord does not want to develop it himself with affordable housing, according to his lawyer, Eric Bregman. He has already talked with Scott Wilson, the town’s director of land acquisition and management, about a potential town purchase for that purpose, Mr. Bregman told the planning board last week as it reviewed a preliminary site plan. “He’s willing and he’s a reasonable guy, so it’s possible.” Mr. McCord is not “a full-time developer,” according to Mr. Bregman, so “if a deal is made, it could be attractive.”

Knowing that, the planning board was more focused on the site’s attractiveness for affordable housing than on the application itself.

According to the Planning Department memo prepared by Tina Vavilis LaGarenne, a principal planner, the affordable housing overlay would allow for “eight apartments per acre or four single-family residential units per acre. Based on those standards . . . the size of the property could allow up to 32 apartment units or 16 single-family residential units.”

“I think it’s the best and highest use of the property,” Ed Krug, a planning board member, said, calling it “a historic moment.”

“Affordable housing is so important in this town and this is so perfect for that,” Sharon McCobb, another board member, added.

“I can’t say strongly enough, I hope you reach a deal,” said Randy Parsons, another board member. “This is one of the really fine parcels for affordable housing.”

While the town has eyed the property for affordable housing for some time, the price has historically been prohibitive, but Mr. Parsons pointed out that there are options that could entice the right seller. One might be a “bargain-sale technique” in which “the owner can donate a certain percentage of the value to the town and use that to offset the capital gain.”

He noted that “if we grant preliminary approval, the value of the property goes up quite a bit, and some sellers have refused to sell until the value is enhanced in that way.”

The property was once a horse farm that stretched all the way from Pantigo Road to Further Lane. In 1924, John Woolnough bought the Abraham Baker House, built there in 1745, and turned it into a clubhouse for the Riding Club of East Hampton. One could argue that these were the most celebrated days for the address. Jacqueline Bouvier, born in 1929, reportedly started riding lessons there when she was only 2, and spent the 1930s at the club, jumping horses. Decades later as Jackie Kennedy she would become the first lady.

Around when the Kennedys were courting, Stern Brothers East Hampton Green opened a department store on what was by then a four-acre parcel, which became Gertz East Hampton in 1969, “stocked with resort and city fashions” in 12,000 square feet of space.

By the mid-1980s, Stern’s Department Store was back and remained in operation until 1994, when the A&P Corporation, which owned a store on Newtown Lane that is now a Stop and Shop, sought to move and expand into a 40,000-square-foot supermarket that it would build at 350 Pantigo with 189 parking spaces. (As a comparison, King Kullen in Bridgehampton is 58,000 square feet.)

People pushed back and a public hearing attended by 300 residents led to a law change, which capped supermarkets at 25,000 square feet.

In 1998, A&P, which was then leasing the property from Heller Design Profit Sharing, submitted a plan for two stores, each less than 10,000 square feet, separated by a 10-foot alley. In the meantime, it sued the town for changing the zoning law. Its application sat dormant until 2000, and it withdrew the lawsuit in 2003.

The old Stern’s building crumbled. In 2010, the same year it filed for bankruptcy, A&P dropped its lease. A year later, in September 2011, the buildings on the property were demolished. A parking lot remains. In September of last year, the Abraham Baker House sold for $1.6 million.

While the planning board and town board may agree that the spot would be a good one for community housing, the owner’s lawyer pointed out a probable stumbling block even if a deal should be reached. “We think there’s likely to be strong opposition from the neighbors to the south to affordable housing,” Mr. Bregman said, adding that it might be easier for the town to overcome such opposition.

It “certainly would be timely considering that the affordability crisis in the town is significant,” Mr. Kramer said.

“We sincerely hope it goes that way,” said Ian Calder-Piedmonte, another planning board member.