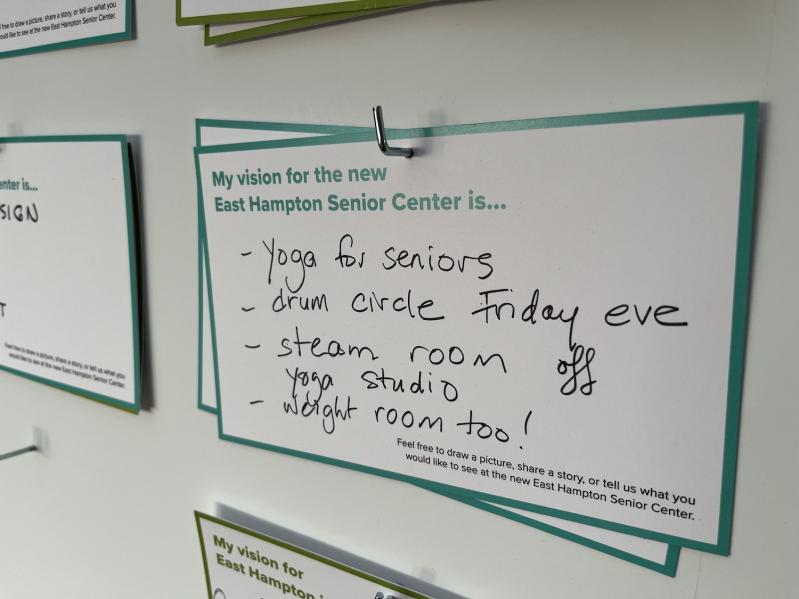 At around 24,000 square feet, the center is proposed to be more than double the size of the existing senior citizens center, a more than 100-year-old building on Springs-Fireplace Road in East Hampton. Renderings displayed on Tuesday offered strikingly different layouts, but common elements include sleek, modern design and abundant natural light.

The property is part of a 14.3-acre, residentially zoned parcel adjacent to an undeveloped portion of the town-owned Terry King ball field complex.

R2 Architecture, a joint venture between Ross Barney Architects and Ronnette Riley Architect of New York City and Bridgehampton, was engaged to design the new center following the September 2021 acquisition of the property on which it will be built.

A community engagement program with users of the present senior citizens center and staff of the town’s Human Services Department was held in May, followed by a community survey in July that collected almost 400 responses and tours of the existing center and future site.

On Tuesday, R2 representatives shared conclusions, including a proposal for a commercial kitchen and dining room that are more than double the size of those at the existing center. Where the existing center has one activity room, they propose three at the new building. They also described a center organized along a gradient, from services and activities needing a specific type of space to those that can happen in a flexible space. A 3,000-square-foot dining room that seats 120 could, for example, double as a lecture or concert hall seating 210.

The board saw renderings of a “linear” design, two structures joined by a central corridor, with covered outdoor areas; a “courtyard” design that emphasizes the outdoors and nature, in which dedicated program spaces wrap around a central outdoor space; a “village” design, a series of interconnected pavilions, and a “windmill” design resembling, from above, a windmill’s blades, with the dining room at its center.

The goal, said Councilwoman Kathee Burke-Gonzalez, is to choose a design by year’s end. In turn, she and her colleagues discussed what they like and do not like about particular features. “Surface area in buildings impacts maintenance but also energy usage,” said Supervisor Peter Van Scoyoc, who is a former builder. “I like the idea of trying to consolidate buildings as tight as possible on the property,” rather than some of the more-spread-out designs.

While he appreciates the traditional architecture common in the town, he said that there is “an opportunity to go beyond that here, and we should take advantage.”

But Councilwoman Sylvia Overby said, “I do think we need to consider the vernacular of East Hampton as far as architecture,” and felt that some of the designs do not. The building will be long-lasting, she said, and “we have to be careful” that the design “isn’t too stark a change from other buildings in the town.” Other considerations voiced included parking areas and their distance from the center.

Ms. Burke-Gonzalez suggested that R2 representatives return to a board work session next month, possibly on Dec. 13, at which the board could hear feedback from staff and users of the existing senior citizens center, and “try to come to a consensus on the final schematic.”