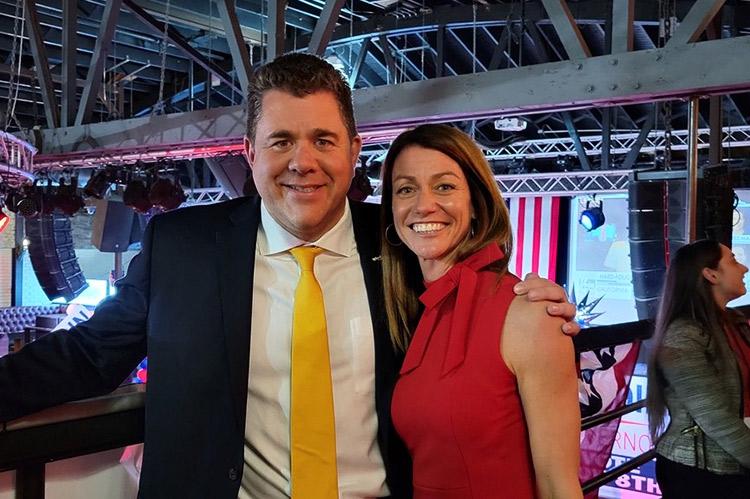 Nick LaLota was in Washington, D.C., this week, the representative-elect in New York’s First Congressional District among the incoming freshmen of the 118th Congress who descended on the nation’s capital for new member orientation.

“When I stepped on the House floor for the first time, I got a bit of a chill,” he told The Star on Tuesday, “understanding the gravity of the situation, the history, the many great things done by the House.” He said he has spent orientation networking with future colleagues and navigating bureaucratic and logistical requirements like registration forms, photos, and identification cards.

With several races still to be called in the House of Representatives, Mr. LaLota’s Republican Party was all but certain to claim a slim majority as of yesterday morning. He and his new colleagues in the 118th Congress will meet from Jan. 3, 2023, to Jan. 3, 2025.

Mr. LaLota, who most recently served as chief of staff to the Republican presiding officer of the Suffolk County Legislature and is a former commissioner at the Suffolk County Board of Elections and member of the Amityville Village Board, is part of an all-Republican delegation from Long Island, along with Representative Andrew Garbarino and the newly elected George Santos and Anthony D’Esposito. He succeeds Representative Lee Zeldin, a fellow Republican who served four terms before waging an unsuccessful campaign for governor of New York.

He put 25,000 miles on his car during the campaign, Mr. LaLota said, and the district’s residents he spoke with “wanted government officials to work across the aisle to find solutions to the economic issues and public safety issues challenging Long Islanders every day.”

A divided government, he said, “requires Republicans and Democrats to work together. With a Republican House and a Democratic Senate, compromise is going to be necessary.” There can always be bipartisanship, he said, “and this is probably the right time to seize those opportunities.” He said that several colleagues-to-be, of both parties, “want to do things like restore the SALT deduction,” the state and local tax deduction that was capped at $10,000 in the Republican-led tax overhaul in 2017, “and I look forward to working with them to work for our constituents.”

He also spoke of American energy independence, which he said should be attained through domestic extraction of fossil fuels. “We can get it safely out of our ground and not overseas,” he said.

During a debate last month with his Democratic opponent, Suffolk County Legislator Bridget Fleming, he said that “we’re sitting on 43.8 billion barrels of proven oil reserves. That’s a 20-year supply. . . . We should be getting oil out of our own ground right now,” a reference to natural gas reserves in the state’s Southern Tier that he said “could be extracted safely. They’re doing it safely in northern Pennsylvania. We should do it here in New York as well.”

That, he said on Tuesday, “will help the environment, and also increase the supply of American energy and bring prices down.”

Referring to the annual deficit and national debt, he said it was necessary to “work together to ensure we slash wasteful spending, to ensure the next generation has as many opportunities as we had.”

In the First District, “we need to get our fair share,” he said. “New Yorkers get hosed — for every dollar we send in federal tax revenue, we get 93 cents back, the fifth-worst return of any state in the union. House members must work together to ensure New Yorkers, and specifically Long Islanders, get their fair share of the federal pie.”

He said he is focused on “the 46th president,” President Biden, “and how we could work to find solutions.”

Asked if he had a message for his constituents-to-be, he said, “I appreciate their confidence in sending me to Washington, and I intend to work my tail off on their behalf.”