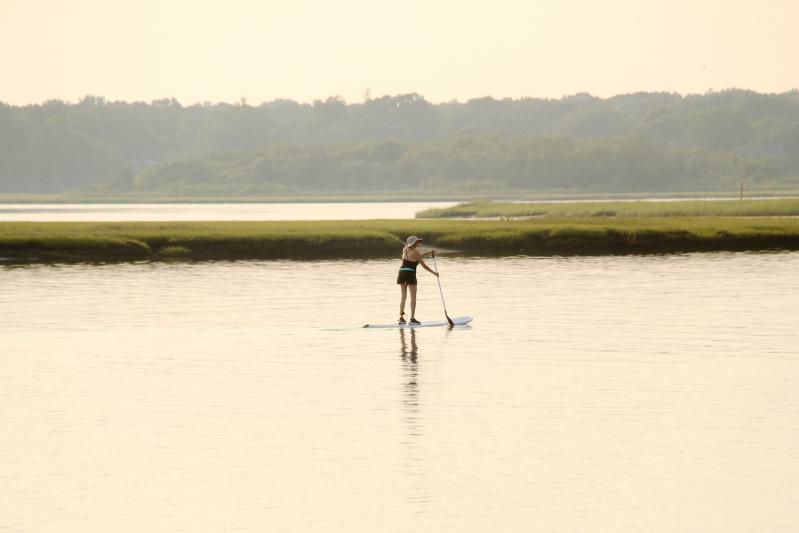 New York State’s Clean Water, Clean Air, and Green Jobs Environmental Bond Act of 2022, which voters passed by a comfortable margin on Nov. 8, will be of greatest benefit to Long Island, an environmental activist said this week.

The statewide ballot proposal authorizes the sale of bonds up to $4.2 billion to fund environmental protection, natural restoration, resiliency, and clean energy projects. Broadly, projects will address restoration and flood risk reduction (at least $1.1 billion), open space land conservation and recreation (up to $650 million), climate change mitigation (up to $1.5 billion), and water quality improvement and resilient infrastructure (up to $650 million).

In Suffolk County, the board of elections’ unofficial tally shows voters approving the act by 328,372 votes to 187,972 votes, or 63.6 percent to 36.4 percent. In East Hampton, unofficial results had 7,106 voting in favor and 3,263 opposed, or 68.54 percent to 31.46 percent. A board of elections deputy commissioner said on Monday that affidavit ballots from polling sites, as well as absentee ballots, were still being processed. Tuesday was the deadline for receipt of absentee ballots.

Passage of the act “was a giant win,” said Adrienne Esposito, executive director of Citizens Campaign for the Environment, “because in a year where everything was divided, we all agree on clean water.” The act was approved because “everybody worked together,” she said, including environmental groups, unions, and small businesses. “Everyone agreed that this was good for our health, our environment, and our economy.”

“Climate change and water quality are the challenges of our lifetime,” Ms. Esposito said. “We need to address them.”

The act “is really made for Long Island,” she said. “We benefit the most.” The allocation for water quality improvement and resilient infrastructure will mean “expanding sewers where appropriate, and also paying for these very expensive filtration devices for emerging contaminants like 1,4-Dioxane,” a solvent that the federal Environmental Protection Agency classifies as a probable human carcinogen. (New York was the first state in the nation to adopt a standard for 1,4-Dioxane, at a maximum level of 1 part per billion.)

The act will also allow restoration of coastlines, Ms. Esposito said. That will mean “rebuilding wetlands and increasing coastal stabilization programs,” which she called “nature’s defense against flooding,” providing protection from sea level rise and extreme storm events. Restoration of seagrass beds, which reduce the impact of wave action, could also result from the act, she said, along with re-establishment of shellfish populations, “because the cleaner the water, the stronger the wetlands. It’s all a circular ecosystem, where we have to restore wetlands, replant seagrass beds, restore shellfish populations, and reduce nitrogen, all of which strengthen our coastlines.”

But now the real work begins, Ms. Esposito said, as municipalities work with the State Department of Environmental Conservation, Gov. Kathy Hochul, and respective members of the Legislature to request funding for specific projects.

During the budget process in 2023, Assemblyman Fred W. Thiele Jr. said on Tuesday, “we will begin to appropriate funds from the bond act for various categories. The next step is to decide how much we’ll authorize for the coming year.”

Along with the D.E.C., the State Environmental Research and Development Authority, or NYSERDA, and the State Office of Parks, Recreation, and Historic Preservation are likely to administer some allocations from the act, he said. “Depending on categories, there will be an application process, with standards whereby projects will be able to be applied for. . . . Some money will be spent by the state and we’ll appropriate that directly from the Legislature, but for those involving local governments, there will be an application process, and decisions will be made by the agencies as to which are funded.”

Since 1995, Mr. Thiele has been a member of the Assembly’s Standing Committee on Environmental Conservation, which “will have a lot to say about priorities,” he said. Legislators “will have the ability to lobby for local projects and write support letters, etc. I hope to have some role in helping to set the priorities for Long Island.” The Peconic Estuary Program is “certainly very important,” he said.

“There is so much in this environmental bond act that would help Long Island become more sustainable and protected,” Ms. Esposito said.

“Elected officials will now have an unprecedented opportunity to set New York’s environmental agenda,” according to the New York League of Conservation Voters. “And the $4.2 billion is just part of the funding that New York will be able to use for its environmental projects, as the state will also be eligible to receive matching federal funds through the Inflation Reduction Act and the Infrastructure Investment and Jobs Act.”