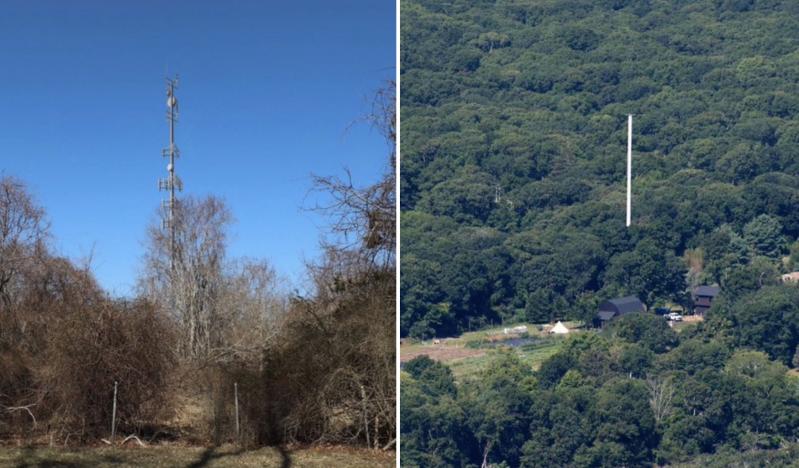 The tower at Camp Blue Bay as it might look from on the property, left, and the tower at the Springs Fire Department.
APT Engineering and Doug Kuntz Photos
By Christopher Gangemi

No one would have guessed at the Oct. 19 public hearing concerning the tower that not only would all the comments be positive, but nearly all of them would relate to another application altogether, for a tower at the Springs Fire Department.

Many of the public comments seemed to indicate that the fire department pole could simply be “switched on,” alleviating cellphone and emergency communications problems in the surrounding area.

“ ‘Switch it on’ is a neat slogan. It’s not quite that easy, but the tower contractor can quickly mount antennas,” said Carl Irace, an attorney for the Springs Fire District’s board of commissioners. “Those forums were all Manny’s ideas.”

“They could fit cell service equipment on the tower now,” said Mr. Schantz. “However, they have yet to seek the necessary approvals for the cell equipment. They can’t fit the town’s emergency services equipment. Physically, the existing tower is not built for that.”

In a phone call Mr. Vilar claimed that the town has engaged in a “purposeful and willful attempt to prevent the fire department from bringing that tower on.”

“Riling people up to speak at a public hearing for a different application was unproductive,” commented Ian Calder-Piedmonte, a planning board member.

The fire department hasn’t been in front of the planning board since September 2021. Back then, its application included the town’s emergency equipment. But in December 2021, the town board voted unanimously to place that equipment at Blue Bay, so that aspect of its application, at least, is obsolete.

“We welcome the fire department to submit something that’s going to improve cell service in the Springs,” Mr. Schantz said.

“Until September, we thought we still needed a 180-foot pole,” said Mr. Irace, for the emergency equipment. “We didn’t have reason to prioritize review of a shorter pole. We do now. We’re review ing that and will put that alternative design to the planning board when it’s ready.” Mr. Irace didn’t offer a timeline, but noted that emergency response communications are integrated with wireless. “The line between radio and wireless and their necessity is getting blurrier and blurrier,” said Mr. Irace. Improving cell service would also improve the emergency response in Springs.

The Springs Fire Department’s quest for an emergency communications tower at its 179 Fort Pond Boulevard property began in October 2014 when the department and its tower contractor, Elite Towers, applied to the town for two building permits. Permits were granted for a 150-foot tower.

Since then, much has transpired. The building permits were revoked by the town’s zoning board of appeals in late 2015, after neighbor opposition. By then, the pole was built, though not operational. The Springs Fire Department sued the town over the Z.B.A. decision in January 2016. Four and a half years later, in May 2020, the state Supreme Court upheld the Z.B.A.’s decision.

In the meantime, the town began an emergency communications system upgrade, hired Cityscape, a wireless consultant, and explored other locations for a pole, including the Crandall-Norfolk woods, which was also torpedoed by neighborhood opposition. It wasn’t until August of 2021 that Camp Blue Bay became a real option. Previously, the Girl Scouts of Nassau County, which owns the 172-acre parcel, were not interested in a new tower on their property.

“We don’t have faith in the town’s telecommunications engineering,” said Mr. Irace. “The town has changed the details and specifications of what’s needed on the pole multiple times.”

In July 2019, the fire district submitted a new plan for a 185-foot monopole for emergency communications equipment at a new location on the property. It also agreed to remove the previously built 150-foot pole. A year later, the Planning Department ruled that the tower would have a significant environmental impact for the surrounding neighborhood, which is residential, and asked for a more detailed environmental review.

The reasons the Planning Department listed were aesthetic, but also historical. The Springs Fire Department is near the Springs Historic District. A tower at Camp Blue Bay was deemed to have less of an impact.

“For whatever reason, they didn’t find the same harm at Camp Blue Bay. I don’t know what to make of that,” said Mr. Irace. “The town wants to put a 185-foot tower on the bay. How does that not have aesthetic harm?”

“It’s a matter of location,” said Mr. Schantz. “At face value, they’re proposing the same thing as far as structure. There’s a big difference though. The fire department is on 2.7 acres, near a historic district and right near a historic property, and visible from a scenic area of statewide significance. None of that existed at Camp Blue Bay, which is 172 acres. The tower will be seen from there, but visibility is a manner of degree. You can see the tower, but it’s not nearly as conspicuous.”

So, when could the Springs Fire Department tower be operational? “I don’t know,” said East Hampton Town Supervisor Peter Van Scoyoc. “They have to update their application. It could go pretty quickly. We want those applications to be reviewed expeditiously because this is a pressing issue for many Springs residents.”

“With the code change [reducing the fall zone requirements] and a fairly specific request from the town board, we’re ready to go with it,” said Mr. Irace. “The commissioners are not looking to get into a fight with the town board. We’ve got a good application.”

Which is to say that the town and emergency responders all agree that a tower at the Springs Fire Department is necessary.

“Many people came out for the Blue Bay hearing,” said Mr. Calder-Piedmonte. “Unfortunately, people might have felt that they said their piece, but they delivered it in the wrong forum, which means ultimately it was not heard. Next time the fire department updates their application I hope those people return.”

“This isn’t a political issue, nor should it be made one,” said Mr. Van Scoyoc. “It’s about providing needed services for the community, regardless of someone’s political affiliation.”