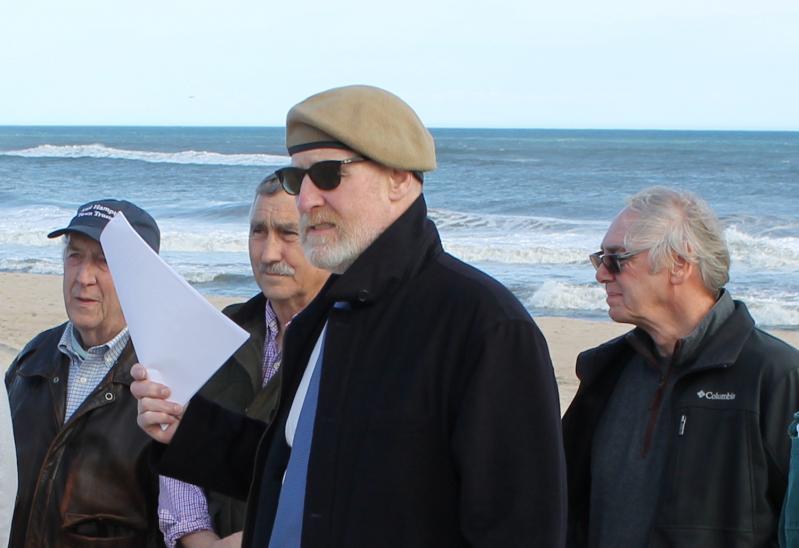 Daniel Rogers, an attorney representing fishermen who drove onto Truck Beach in two 2021 protests, at the beach in March 2022 discussing a class-action lawsuit that the fishermen and the East Hampton Town Trustees filed against the homeowners associations along the Napeague Beach. Behind him are the trustees Bill Taylor, Jim Grimes, and Francis Bock.
Christine Sampson
By Christopher Walsh

The war of words between attorneys over the 4,000-foot stretch of Napeague ocean beach popularly known as Truck Beach continued this week, when an attorney for the homeowners associations who successfully sued East Hampton Town and the town trustees to assert that their property deeds extend to the mean high-water mark of the beach submitted a motion to hold the trustees in civil contempt.

On Monday, Stephen Angel, representing five homeowners associations, asked the New York State Supreme Court to hold the trustees in civil contempt of the Appellate Division’s Feb. 3, 2021, ruling that overturned the court’s 2016 decision holding that the trustees’ 1882 conveyance of some 1,000 acres on Napeague to Arthur Benson reserved the public’s right to access the beach for fishing and fishing-related purposes.

The trustees, he wrote, should also be held in contempt of an April 2021 modified judgment, a June 2021 temporary restraining order, and a June 2022 order finding the town and trustees in civil and criminal contempt of the judgment “on the ground that the trustees, acting through their counsel, Daniel G. Rodgers, Esq., and acting in collusion with various individuals, including Daniel Lester, are publicly denying the validity of — and actively encouraging others to violate — the aforesaid orders and judgment.”

The trustees are not Mr. Rodgers’s client, Francis Bock, clerk of the trustees, said on Tuesday. Rather, in the Truck Beach matter they are represented by the Hodgson Russ firm.

Mr. Rodgers did, however, defend 14 East Hampton fishermen, including Mr. Lester, on charges of trespassing stemming from an October 2021 act of civil disobedience, when they and others drove trucks and a dory across the beach in question before being issued summonses by Marine Patrol agents.

The matter was transferred to Southampton Town Justice Court after East Hampton Town Justices Steven Tekulsky and Lisa Rana recused themselves. With none of the property owners filing a complaint, charges against the 14 fishermen were dismissed last month.

The trustees, Mr. Angel charged, “have actually ramped up their contempt of the injunction by taking it to an open rebellion against the court’s authority.” He said that Mr. Rodgers, whom he repeatedly identifies as the trustees’ counsel, “has acted as someone on a mission to defy the court’s authority, by taking to the airwaves, brazenly insulting the court, including the Hon. Paul J. Baisley Jr., personally, by publicly declaring the court’s orders and judgment to be ineffective, and, worse, by encouraging the public to violate the injunction in a show of civil disobedience.”

Mr. Rodgers had declared the dismissal of trespassing charges a victory and encouraged town residents to access the beach. “We have the reservation, and that is a legal property right that belongs not just to baymen, not just to recreational fisherman, it belongs to 28,000 people who live in the Town of East Hampton,” he said outside the courthouse.

Mr. Angel wrote that, although the Benson deed reserved to town residents “the right to land fish boats and netts to spread the netts in the adjacent sands and care for the fish and material,” the Appellate Division ruled that the reservation cannot be construed as broadly as the trustees and town do, attempting to justify vehicular use on the beach by claiming that it was authorized by the reservation. “Rather, the reservation is in the nature of an easement allowing the public to use the homeowners associations’ portion of the beach only for fishing and fishing-related purposes.”

But much of his submission reads like a plea to Justice Baisley to take offense at Mr. Rodgers’s statements in the wake of the dismissal of his clients’ trespassing charges. While representing the trustees, Mr. Angel wrote, Mr. Rodgers “has ratcheted up his disobedience to an astounding level of disdain, disrespect, and contumacious behavior unbefitting any officer of the court.”

Mr. Angel, Mr. Bock said on Tuesday, “knows for a fact that we’re not [Mr. Rodgers’s] client. So this is just a game, to get us to spend more money, probably another cut to try to bleed us. That’s my opinion.”

“This entire filing is replete with complaints about our being vocal, nothing more,” Mr. Rodgers said on Tuesday. Mr. Angel’s motion “went on for six to eight pages about newspaper articles where I and Daniel were quoted. They’re calling that contempt. They didn’t once claim in their brief that somebody was harmed because they went on the beach. All they did was bemoan the bad press.” The plaintiffs, he said, “are trying to spoon-feed Baisley to see how far he will go. But this is nothing more than speech.”

Like Mr. Rodgers, Daniel Spitzer of Hodgson Russ said the plaintiffs “seem to be complaining about the exercise of First Amendment rights by an advocate who, by the way, does not represent the trustees.”

The trustees, he noted, had issued a statement following the dismissal of the residents’ trespassing charges. The trustees “were pleased to see the dismissal of the charges . . . and congratulate the residents of the homeowners association who refuse to file any trespassing claims against the group of people who were doing no more than trying to support their family.” The statement reminded the public “that an injunction remains in place regarding this dispute, and the trustees who have issued no permits nor taken any other steps in any way encouraging or supporting any action in violation of the injunction, will continue to press in all legal forums the right of the public to use these lands” as they have for more than 300 years.