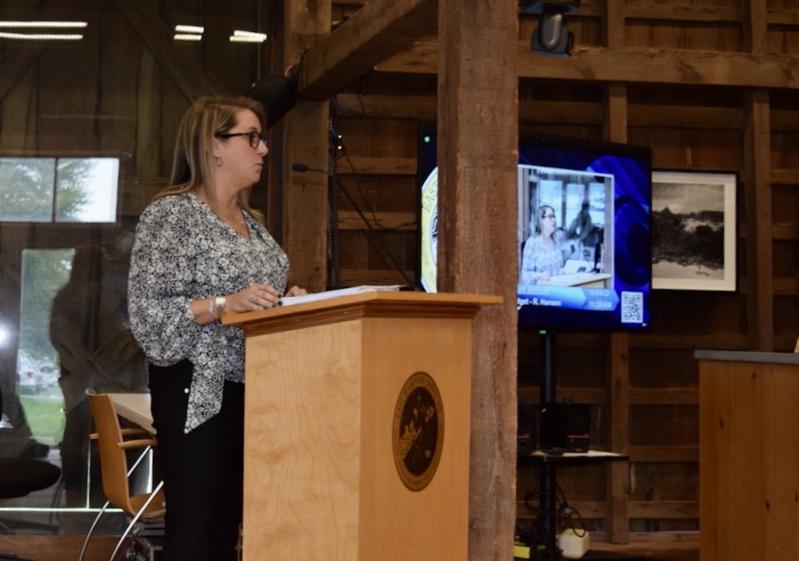 East Hampton Town’s 2023 budget, issued in tentative form at the town board’s meeting on Tuesday, would grow by 5.6 percent over the current budget, to $90.36 million, if adopted, in large part because of inflation and the ever-spiraling cost of housing on the South Fork, town officials said.

“My primary focus this year in the budget has been in making significant changes to wages of town employees,” Supervisor Peter Van Scoyoc said. The board finds it necessary “to raise wages significantly in order to try and stay competitive within the market. We know that there is lot of pressure on this market for employees.” There are numerous vacancies in town staff, he said, though some openings have recently been filled. “It’s absolutely imperative, in order to provide the services necessary and demanded by our constituents, that we have fully funded departments.”

The “sudden and large influx of year-round residents in 2020,” during the first wave of the Covid-19 pandemic, “saw the town’s population increase significantly,” according to the supervisor’s budget message. According to census statistics, the town’s population grew by nearly one-third between 2010 and 2020, a figure that many feel understates the true increase. “The increased demand for services impacted the town and we responded to meet the needs,” Mr. Van Scoyoc wrote in his budget message.

The tax rate for residents living outside an incorporated village will increase by .52 percent, Rebecca Hansen, the town’s budget director, told the board, and those living inside an incorporated village will see a tax rate increase of .05 percent. Under the tentative budget, a property outside of a village with an assessed value of $7,000 — or a market value of $1.2 million — would see an increase of approximately  $12.18 in its town taxes. A similar property inside a village would see an increase of 49 cents.

The budget as proposed would fall under the New York State-mandated 2-percent tax levy cap by just $8,182.

The tentative budget reflects salary increases for all employees, Ms. Hansen said. The Civil Service Employees Association union’s salary schedule gives employees a contractual increase, and the town will further augment those increases with $3,000 “across the board,” she said. “Overall, C.S.E.A. employee salary increases range from 5.3 percent to 9.4 percent,” a similar restructuring to that recently done in Southampton Town. Salary increases are also “significant” for non-represented employees “to keep pace with neighboring municipalities and the private sector.”

The tentative budget reflects 22 instances of merit pay for extraordinary service, as well as multiple promotions, title changes, and new positions. The Ordinance Enforcement Department is budgeted to gain another officer, two inspectors, and an additional animal control officer. The Police Department will gain two officers, and full-time positions are added to the Human Resources, Human Services, Land Acquisition and Management, and Sanitation Departments.

The tentative budget includes final funding for completion of the town’s road map to its goal of achieving 100 percent of its energy needs from renewable sources. Also included are outlays to nonprofit organizations such as the Eleanor Whitmore Early Childhood Center, I-Tri, the Family Service League, the Retreat, the South Fork Community Health Initiative, and food pantry programs. LTV and the Hampton Hopper shuttle service will also see continued funding.

While inflation has driven the cost of goods higher — the supervisor’s budget message includes examples of sharp year-over-year increases in the cost of supplies such as copy paper, sand for replenishment on Montauk beaches, lumber, and food for the senior citizens nutrition program — two main expenses in the 2023 budget will be lower, Ms. Hansen said. They are the town’s contributions to the retirement system and debt service in the sanitation fund. In the former, budgeted retirement costs are almost $800,000 lower than in 2021, and debt service is to be retired in the latter, saving the town $1 million in 2023. The town is budgeting an 8-percent increase in health insurance for active and retired employees, however.

The town is also seeking federal Covid-19 reimbursement, Ms. Hansen said, with tentative approval for almost $425,000 and a just-completed application for another $308,000.

The town’s sound financial planning and practices, Ms. Hansen told the board, were recently confirmed by a “no designation” financial stress level rating, the strongest designation, by the New York State comptroller’s office. In August, Moody’s Investors Service Inc. affirmed the town’s Aaa credit rating, the highest it assigns, stating in its rating outlook that “the town’s financial position will remain strong due to its conservative budgeting and proactive fiscal management practices. We also expect that the tax base will remain very strong and continue to experience steady growth.”

In summary, the tentative budget is “a solid spending plan that continues the town’s thoughtful approach to budgeting,” Ms. Hansen said. “Revenue projections are conservative where they need to be” and “expenses are realistic and appropriate.”

Some department heads and board members had already commented on the budget, Ms. Hansen said, and feedback will inform any modifications as the budget moves from the tentative to the preliminary stage. She is to attend Tuesday’s work session, where the budget will be further refined.