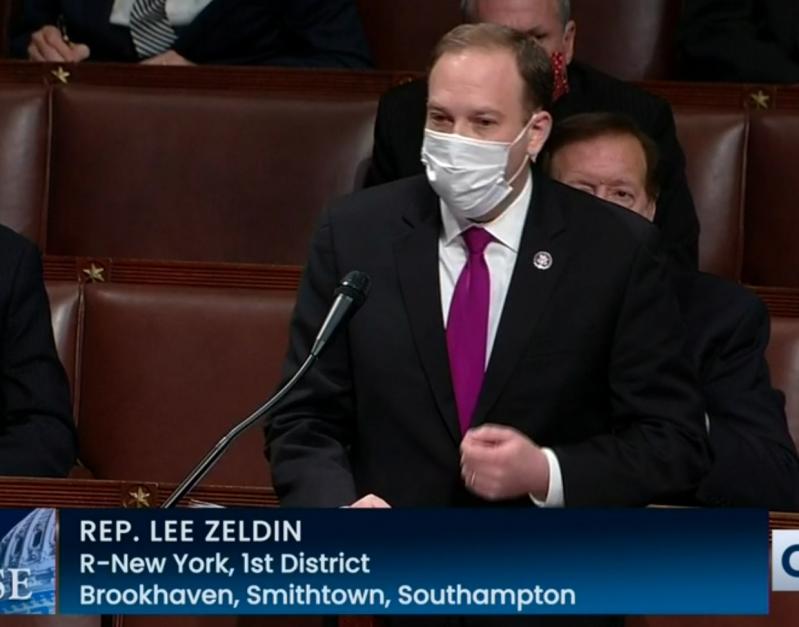 Representative Lee Zeldin speaking on the House floor after the Jan. 6 attack on the Capitol
By Christopher Walsh

As Representative Lee Zeldin of New York’s First Congressional District touts the website RealClearPolitics’ status change of his campaign for governor of New York from “leans Democratic” to “tossup,” his opponent, Gov. Kathy Hochul, is emphasizing Mr. Zeldin’s role in attempting to overturn the result of the 2020 presidential election.

Mr. Zeldin was one of former President Trump’s most enthusiastic supporters and defenders in Congress. He voted against certifying the 2020 election results in two states on Jan. 6, 2021, hours after a mob incited by Mr. Trump stormed the United States Capitol, where a joint session of Congress was certifying the Electoral College ballots.

He was later the sole member of Long Island’s congressional delegation to vote against the creation of the bipartisan Select Committee to Investigate the January 6th Attack on the United States Capitol, commonly known as the January 6th Committee. He has been evasive as to the legitimacy of President Biden’s election in November 2020, in which Mr. Biden defeated Mr. Trump by 306 to 232 electoral votes.

Voter participation, thanks in part to absentee ballots cast by mail during the first year of the Covid-19 pandemic, was high in the presidential election of Nov. 3, 2020. It was not until Nov. 7 that news networks called the election for Mr. Biden.

In an email on Monday, the governor’s campaign presented a text message sent by Mr. Zeldin to Mark Meadows, the White House chief of staff in the final year of Mr. Trump’s presidency. The message was sent on Nov. 6, according to the governor’s campaign, and was obtained by the January 6th Committee. Mr. Meadows, a former congressman from North Carolina, has selectively provided to the January 6th Committee electronic communications sent and received between Election Day 2020 and Mr. Biden’s inauguration.

In the message, Mr. Zeldin suggested — one day before the election was called by news networks — ways to discredit the result. “Mark, 2 ideas: 1) upload vetted voting irregularities (videos, etc) onto one narrowly focused, credible microsite with a donation link for the Presidents legal fund for all of us to reference,” he wrote. “Needs to be done instantly.”

Mr. Zeldin further suggested that Mr. Trump “should have one lead spokesperson organizing daily public press briefings that credibly lays out the facts communicated in an effective way to separate it from the opinions which also need to be shared. That person needs to give an update of the state of play state by state, including a top line summary of where each battleground state stands with the count, projections, possible recounts, legal actions, vetted voting irregularities, unvetted alleged voting irregularities (make clear that the campaign is intensively reviewing those claims for vetting purposes.) Also plug the microsite I mentioned above.”

The text was initially shared via Twitter by Hunter Walker, a freelance investigative reporter.

Mr. Trump continues to assert that the election was stolen from him. He and his allies brought more than 60 lawsuits challenging election results, all of which failed or were dismissed. Multiple state recounts reaffirmed Mr. Biden’s victory.

The former president, who appeared at a New Jersey fund-raiser for Mr. Zeldin last month, endorsed the congressman’s campaign for governor on Sunday. “I have watched and known Congressman Lee Zeldin for many years,” he wrote on his social media platform. “He is a great and brilliant lawyer who was a ‘must see’ for others in Congress when they had a complex legal problem that was holding up legislation. Lee was strong on the Border, Crime, our great Military & Vets (like few others!), and fought hard to protect our 2nd Amendment, and succeeded. Lee Zeldin is a WINNER who GOT THINGS DONE. He will be a GREAT Governor of New York, and has my Complete & Total Endorsement.”

In Monday’s email from the governor’s campaign, Jerrel Harvey, a spokesman, said that “Lee Zeldin’s aspirations to be Donald Trump’s number one ally are never ending.” Mr. Zeldin’s text exchange with Mr. Meadows, he said, reveals that “he played a central role in the former president’s concerted effort to throw out the 2020 presidential election results. Zeldin’s record is already dangerous and disqualifying, and these new revelations show the extent of his involvement in pushing Donald Trump’s baseless conspiracy theories.”

A spokeswoman for Mr. Zeldin did not reply to an email sent on Monday seeking comment.

The most recent poll results to be announced have the governor still leading Mr. Zeldin. A Siena College poll of 707 self-identified likely voters conducted between Oct. 12 and Friday had the governor leading by 11 percentage points, 52 percent to 41 percent. But a Quinnipiac University poll conducted between Oct. 12 and Sunday gave her a smaller lead, 50 percent to 46 percent.

Mr. Harvey, the governor’s spokesman, pushed back on the latter poll, which he said “substantially undercounted Democrats.” Nonetheless, he said, “Governor Hochul continues to receive support from 50 percent of New Yorkers and we are confident in our ability to turn out voters.”

On Saturday, Mr. Zeldin renewed his call for multiple debates across the state. The governor previously agreed to a single debate that was to take place at Pace University in New York City on Tuesday, but Mr. Zeldin called that “a nonstarter.”

“It’s not too late for Hochul to come out of hiding and immediately start doing multiple debates with me across the state,” he said in a statement. “We can start this week! Unfortunately, she’s way too scared to defend her record and positions.”

Early voting begins on Oct. 29. As of yesterday, with Election Day fewer than three weeks away, the candidates had not mutually agreed to debate.