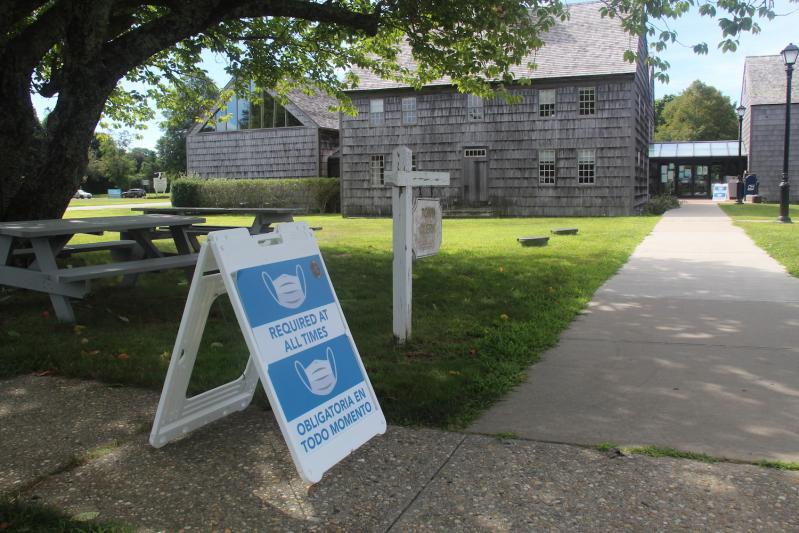 The East Hampton Town Board has again suspended in-person meetings and will go virtual once more with help from LTV as of Tuesday.
Durell Godfrey
By Christopher Walsh

Citing the highly transmissible Delta variant of Covid-19, East Hampton Town Supervisor Peter Van Scoyoc announced Thursday that the town board will return to virtual meetings as of Tuesday.

The move comes on the heels of Gov. Kathy Hochul's signing of legislation extending virtual access to public meetings under New York State's Open Meetings Law. It was just two months ago that the board resumed in-person meetings as the Covid-19 pandemic appeared to be subsiding. Vaccination rates on the South Fork were high and infection rates were low -- on July 1, the county reported just 33 new cases, and the seven-day average of people testing positive down to .4 percent. Since then, however, rates of Covid-19 infection have surged anew in Suffolk County, across New York State, and around the country. There were 521 new cases reported in the county on Sept. 1 and the seven-day average of positive tests had risen to 4.6 percent, a rate not seen since April.

“We won’t be meeting together, we’ll be separate,” Mr. Van Scoyoc said on Thursday. “Just as we did through much of Covid, we’re going back in that direction because of the threat of the Delta variant, which is significant within the community at this time. It’s spreading rapidly, and people need to really take this seriously.”

“It’s being understood now that vaccinations give you significant protection against serious disease and death,” the supervisor said. “In fact, I think over 99 percent of the people who are dying now from Covid are unvaccinated. But people who are vaccinated with underlying conditions are at risk of serious illness. The efficacy of the vaccines seems to be waning over time, and therefore booster shots are being recommended eight months after the last dose of your vaccine.”

While the Town Hall meeting room was filled to capacity during some of the board’s meetings in July and August, just one of 10 residents addressing the board on Thursday did so in person.

As during the state of emergency, the public will be able to view meetings live on LTV’s channel 22, at ltveh.org, or at LTV’s YouTube channel. The public can address the board during virtual meetings by calling 351-888-6331.

"Let's be clear -- the Covid-19 pandemic is not over, and I've heard from government officials across the state who are concerned about the inability of their constituents to access public meetings virtually," the governor said in a statement issued on Thursday. "This common sense legislation extends a privilege that not only helps New Yorkers participate safely in the political process, but also increases New Yorkers' access to their government by allowing for more options to view public meetings.”

State and local governments must still provide notice to constituents that a meeting is taking place, and they are required to inform constituents how to access the public meeting virtually.