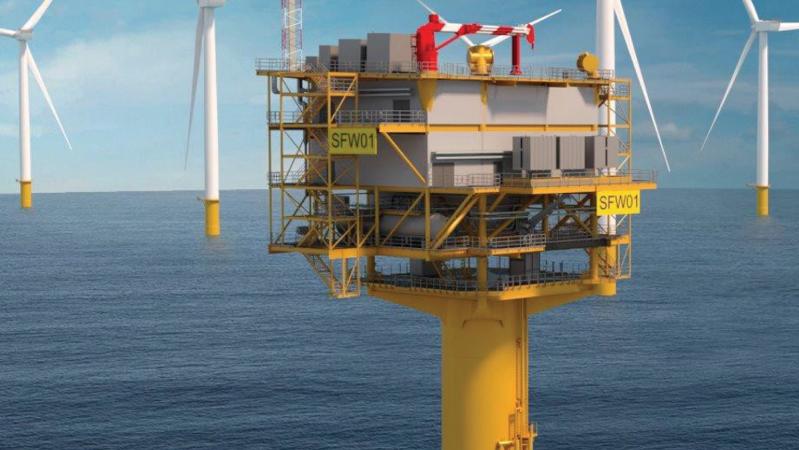 The federal Bureau of Ocean Energy Management has issued a notice of intent for Sunrise Wind, a 924-megawatt wind farm proposed by the developers Orsted and Eversource to be situated in federal waters adjacent to the South Fork Wind farm, which they are also developing.

Orsted and Eversource have also announced the first American-built offshore wind substation, which will be deployed at the South Fork Wind farm.

Offshore wind substations collect the power produced by wind turbines and connect it to the grid. The offshore substation will consist of a topside resting on a monopile foundation.

Kiewit Offshore Services Ltd. will design and build the substation for the 132-megawatt South Fork Wind project. The 1,500-ton, 60-foot-tall substation will be built at Kiewit's facility in Ingleside, Tex.

Kiewit expects to begin construction on the substation in November and complete the work by spring 2023, before transiting the substation across the Gulf of Mexico and up the East Coast for installation at the South Fork Wind site in the summer of 2023.

BOEM issued the South Fork Wind farm's final environmental impact statement on Aug. 16. South Fork Wind, according to its developers, remains on track to be fully permitted early next year, with construction to begin soon after and the project operational by the end of 2023.

"We're helping to build a new U.S. manufacturing industry that will create thousands of good-paying jobs not just in the Northeast but in communities across the United States," David Hardy, chief executive officer of Orsted Offshore North America, said in a statement last week. "We're proud to partner with Kiewit to deliver the first American-made offshore wind substation. This initiative is part of our commitment to deliver for our long-term partners, combining international experience with local expertise in communities across the country."

In other news from Orsted and Eversource, crew members and Atlantic Pioneer, a crew vessel, were taken off the water in advance of Tropical Storm Henri, which made landfall at Rhode Island on Aug. 22.

"The Block Island Wind Farm fared well throughout the storm," Meaghan Wims, a spokeswoman for the developers, said. "We have resumed our scheduled maintenance and repair work, and expect to complete that work in the next few weeks as scheduled."

Free Car Seat Checks in Southampton
Battle of the Books, and More Fun for Teens
This Week's Happenings in Montauk
END_OF_DOCUMENT_TOKEN_TO_BE_REPLACED