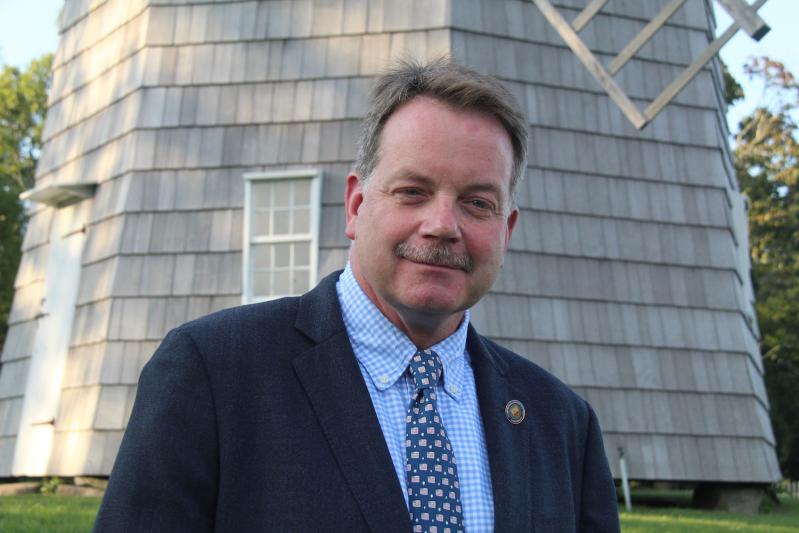 "I'm going all the time," East Hampton Village Mayor Jerry Larsen said of his first year on the job. "It's crazy, but it's fun."
Durell Godfrey
By Jamie Bufalino

Looking back on his first year in office, East Hampton Village Mayor Jerry Larsen, who was elected last September, cited the introduction of paid parking, improving the village's infrastructure, creating more community events, and shoring up the village's finances as accomplishments, and the lack of progress on developing a sewer system as a major disappointment.

"Probably the best thing we've done is come through with the lowest tax increase in five years," said Mr. Larsen, referring to the 1.15-percent property tax increase in the current fiscal year's budget. His administration has developed new revenue sources including charging for parking in the Reutershan and Schenck parking lots, which has brought in more than $80,000, he said, and selling monthly beach parking permits, which has garnered about $360,000.

After initially proposing a more wide-ranging paid parking plan that would have included fees for spaces on Main Street and Newtown Lane, the village board approved a scaled-down version that applies only to the Reutershan and Schenck lots, and allows two hours of free parking and the option to pay $10 for a third. When the program began in May, residents had been confused about the rules, and about how to use the smartphone-app payment system, but Mr. Larsen said the rollout has ultimately proved to be a success. "The lots haven't been overcrowded, and I get compliments all the time about the app, and that people get the option to stay a third hour," he said. The village also began exclusively using a vehicle with license-plate-reading technology to enforce parking regulations, rather than chalk-wielding traffic control officers. That transition hasn't brought in as much revenue as expected, Mr. Larsen said, but parking in the village is a much "friendlier" experience now that citations are not the sole source of revenue.

The introduction of monthly beach parking permits has been a "home run," he said. To make sure the lots did not become overcrowded, the village severely reduced the number of daily parking passes issued, but that might not be necessary next summer. Mr. Larsen said he asked the police department to track parking at the beaches at 11 a.m. and 2 p.m. each day from Memorial Day to Labor Day to see how many parking spaces were in use. "So next year we'll be able to target this perfectly because we're going to have all this data, and know how full we were," he said.

He cited the creation of the East Hampton Village Foundation, a nonprofit that seeks to raise private money for the village's public works projects, as another boon for the village. The foundation has been raising money for the celebration of the centennial of the village's incorporation and the renovation of Herrick Park. For the foreseeable future, the foundation will focus on Herrick Park because the renovation is expected to cost between $7 million and $8 million, he said.

Over the past year, the park has become home to several new events and gatherings, including a farmers market, a movie night, an art fair, and theatrical performances, in an effort to create a sense of community, he said. The same goes for the concerts that were held at Main Beach on Tuesday nights this summer. "This music thing has been really popular," Mr. Larsen said.  "At every single show I've had someone come up to me and say, 'You know I've lived here for 20 years and I've never felt like part of this community, and now I do.' "

There are more events in store for the park. The village has offered to hold the East Hampton Library's Authors Night there next year, he said, and this winter, he's hoping to transform the tennis courts into an ice-skating rink.

His administration has also been working to improve the village's infrastructure, from painting lampposts to purchasing a new garbage truck and street sweeper to spending nearly $100,000 to renovate the Osborn-Jackson House on Main Street, which serves as the headquarters of the East Hampton Historical Society.

Much of his weekly agenda is set during Monday morning meetings with department heads, Chris Minardi, the deputy mayor, and Marcos Baladron, the village administrator, he said. "It's really a way to get everybody on the same page, because if you don't know what I'm thinking or what I want, how can you get things done?" he said.

His party, the NewTown Party, holds a board majority with Mr. Minardi and Sandra Melendez, a trustee, serving alongside Rose Brown and Arthur Graham of the Fish Hooks Party. During his tenure, there has been a pronounced interparty iciness at board meetings. "There's clearly tension on the board," he said. At several meetings, Ms. Brown and Mr. Graham have complained about not being given timely access to agendas and research materials, which has sometimes made it impossible for them to cast an informed vote on a proposal. "They had a legitimate gripe in the beginning, while we were figuring this all out, but they don't now," said Mr. Larsen. Ms. Brown and Mr. Graham now have a weekly meeting with Marcos Baladron, the village administrator, who briefs them on issues, he said. The seats Ms. Brown and Mr. Graham hold will be up for a vote next year, and the NewTown Party plans to run two candidates against them, he said, because "they never shared the ideas that our party has. We need to keep the momentum going and never lose the majority, that's the key."

One of Mr. Larsen's proposals, which he had touted during his campaign, was to reconfigure parking on the eastern end of Newtown Lane from parallel to diagonal parking. The board approved the proposal in May, without Ms. Brown's or Mr. Graham's support, but the effort has since stalled. He is not sure if he will continue to push for the change, because several residents have expressed opposition to the idea. "I go back and forth with it," he said. "I think it would look great, it would make the street more of a walking street, and make the crosswalk safer, but it's not a battle I need to fight."

He is eager to get to work on developing a sewer system and sewage treatment facility for the commercial district. The Nelson and Pope engineering firm had identified a vacant lot just north of the railroad trestle on North Main Street and the Accabonac Road parcel that is home to the Department of Public Works as potential sites for the sewage treatment facility, but the former turned out to be unworkable, he said, and the D.P.W. site, which is in East Hampton Town, is too far away and would require approvals from the town, which would slow the process down. "We're now looking at the long-term parking lot," he said. The village has recently received a state grant of more than $100,000 to explore that option, including the possibility of building the facility underground.

The village may soon issue a bond to raise money to study that proposal, to complete the restoration of the Dominy shops, to purchase new trucks and other equipment for the Fire Department, and for the renovation of Herrick Park, he said.

He plans to eliminate the village board's monthly work sessions, and hold just one meeting per month. "We can accomplish everything in one meeting," he said. "We can have our discussions, and go right into our board meeting." For proposals that are controversial, he would reserve the option to keep public hearings open to the following month based on whether substantive issues are raised, he said. "We'll decide as the laws go."

At the next board meeting, he will introduce a proposal to repeal a 2015 law that prohibits a building's basement from extending beyond the exterior wall of the first story, he said. The proposed law will allow basements to expand by 25 percent of the first-floor area, but they must be within the same setbacks as the structure. Another proposal in the works will require commercial properties to maintain the sidewalks and public spaces in front of their buildings. "Some of the alleyways are privately owned and they are not cleaned," he said.

The past year has been one of "constant meetings," he said. "I'm going all the time, it's crazy, but it's fun. I'm liking it."