In East Hampton Town, thousands more trees have succumbed to an invasive pest 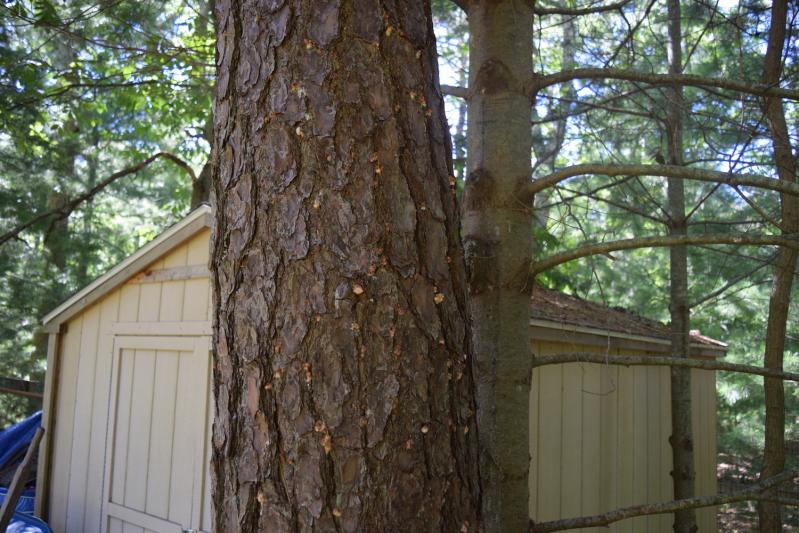 Southern pine beetle infestation of trees has increased this year, according to East Hampton Town officials, and has spread from Northwest Woods to Wainscott.
Christopher Walsh
By Christopher Walsh

The southern pine beetle infestation that has killed thousands of pitch pines in East Hampton Town since 2017 is continuing its destructive march, with thousands more dead and dying trees identified this year.

In what Councilwoman Kathee Burke-Gonzalez called a "sobering update," Andy Gaites and Scott Wilson of the town's Land Acquisition and Management Department briefed the town board Tuesday on the fast proliferation and geographic expansion of the invasive species from the Northwest Woods area into Wainscott.

The invasive beetle was first identified on Long Island in 2014. Affected pines as well as those in a buffer zone around them are felled and removed to suppress the spread.

Inspections have been ongoing since the beetles were discovered, Mr. Gaites said, and continued on Monday with an inspection of East Hampton Airport in Wainscott with assistance from the New York State Department of Environmental Conservation. The airport, he said, had been one of few town lands where significant infestation had not yet been found. "Unfortunately, yesterday we marked over 500 trees there," he said.

The D.E.C. has limited staff, he said, and "our small department cannot cut these trees in a timely manner." The beetles are "reproducing and spreading to trees over and over." At the airport site, southern pine beetle infestation is mostly near Industrial Road, Mr. Gaites said.

The town provides inspections for private property owners on request. If actively infested trees are found and marked, property owners can remove them at their expense, but dump fees are waived should property owners opt to take them to the town's recycling center within one month. "So far this year, we have inspected 57 private properties and have marked over 2,000 trees on private property," Mr. Gaites said. "Inspection requests are still coming in. With a lot of trees dying, they're coming more quickly." A large majority of the more than 2,000 newly infested trees has been identified in the last month, he said, and "I suspect we will continue to see more inspection requests."

When town officials mark trees for recommended removal, they also mark trees in a buffer zone, generally when they are within 20 feet of an affected tree's branches. Those are also recommended for removal.

"I really thought we would be able to beat this problem," Mr. Wilson told the board, but infested trees on Suffolk County land were not always removed due to insufficient capability or manpower, and some residents did not remove their infested trees. "If we were all rowing in the same direction it may have been possible," he said. "But we were not all rowing in the same direction."

There are private properties that have gone unmanaged, Mr. Gaites said, and instances when town officials are unable to contact property owners. "It appears this beetle is here to stay," he said, managed, it is to be hoped, but not eradicated.

Signs of infestation were evident on a recent tour of Bay View Avenue in East Hampton's Northwest Woods, where multiple property owners have scheduled removal of trees.

Ilissa Meyer, who lives in Northwest Woods, said earlier this month that the southern pine beetle "is invading neighborhood after neighborhood," and pointed out multiple affected trees on and off her property. "I've gotten hold of as many people on the street as I know," she said. But the trees in her wooded neighborhood "are dying rapidly."

Ms. Meyer has scheduled the removal of several pines on her property. "At this point I don't know if it's reversible," she said of the infestation. "Unfortunately, people like me are going to spend tens of thousands of dollars trying to save them."

On Tuesday, Councilman Jeff Bragman said that the D.E.C. had long ago recognized that "we were unable to get critical mass to stop it" in East Hampton. "They acknowledged they were not going to defeat these beetles, I think, in August 2018."

There was a statement to that effect, Mr. Gaites said, "and they did pull resources back upstate to other projects because this spread has gotten pretty bad."

The D.E.C. has prioritized suppression efforts within the Central Pine Barrens to protect the largest intact pine barrens ecosystem on Long Island, an official speaking on background said. Southern pine beetle management on the South Fork has been a secondary objective as it is outside of the Central Pine Barrens and the ecosystem here is fragmented. D.E.C. crews have, however, conducted some suppression efforts in Northwest Harbor County Park, Barcelona Neck State Forest, and smaller public lands in the town. But "based on the fragmented nature of this landscape," the official said, "it is not possible to get permission from all of the landowners to cut thousands of trees within the effective time period."

While every infested pitch pine will die, Mr. Gaites said, white pines have a good chance of surviving infestation; the town does not recommend their removal. In fact, to replace pitch pines removed after an infestation, "we recommend white pines," Mr. Gaites said, as there is little evidence that the southern pine beetle can successfully reproduce in and exit from the tree.

Proactive cutting, early enough and often enough, will slow the beetles' spread, Supervisor Peter Van Scoyoc said, but he seemed to acknowledge that the infestation at the airport cannot be reversed.

Mr. Gaites and members of the board discussed updating a map made a few years ago to delineate infested areas in the town and posting it to the town's website. "There are a lot of areas spread around town at this point," he said.