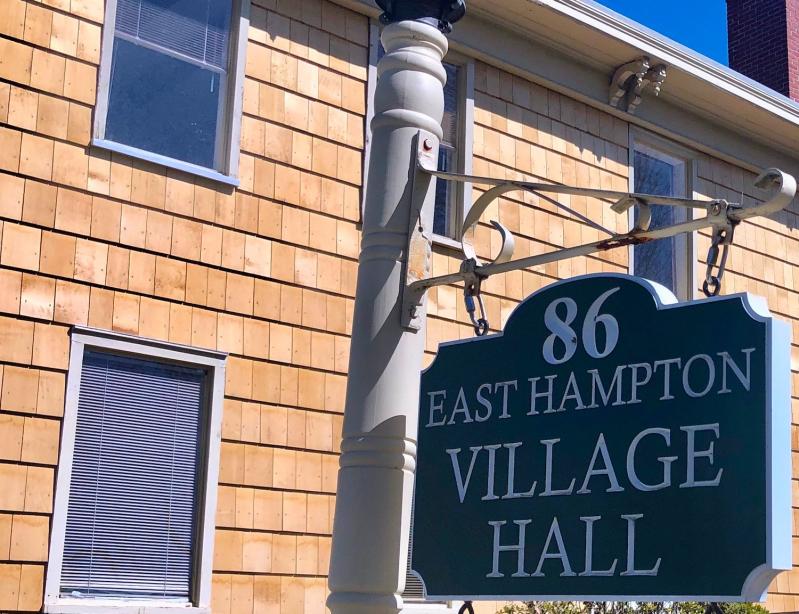 The East Hampton Village Board approved several zoning code changes last week, immediately after hearings on them, but the mayor said he is planning to institute a policy that would require the board to wait until the following meeting to take a vote.
Carissa Katz
By Jamie Bufalino

A proposal that will permit two-bedroom accessory dwellings with kitchens on East Hampton Village properties of 60,000 square feet or more, and several other zoning code amendments were approved by the village board on Friday following public hearings during which members of the village's zoning board of appeals, and the executive director of the Village Preservation Society of East Hampton, asked the board to take more time to analyze the potential ramifications, and give residents a chance to offer input.

Among the zoning code changes, the board approved a proposal that will allow the owners of nonconforming buildings or buildings on nonconforming lots to enlarge, reconstruct, alter, restore or repair the structures without receiving permission from the Z.B.A. as long as the work does not increase the degree of nonconformity.

To encourage the development of work force housing in the commercial district, the board approved a proposal to exempt units that are developed within 500 feet of the train station from providing parking. A provision that would have required developers to pay a $20,000 fee in lieu of providing parking was not included in the final draft of the proposal.

Proposals to double the cost of a building permit for those who have begun construction prior to a permit's being issued, to exempt flat roof safety railings from being factored into a height calculation, and to exempt walkways that provide noncommercial access to the beach from being calculated in permitted lot coverage, were also approved.

Accessory dwellings on lots with an existing single-family residence have been prohibited since 2013, according to the village's code book. The proposal will permit them in residential districts but with several restrictions. They can contain no more than two bedrooms, must adhere to the same setback requirements as the principal residence, and occupancy is limited to family, friends, and employees such as caregivers and household staff. Homeowners will not be allowed to rent the dwelling separately from the principal residence, and the accessory dwelling's ground floor area will count toward the principal residence's maximum ground floor area. A property covenant that details the restrictions of the use must be recorded with the Suffolk County Clerk.

Residents who add an accessory dwelling will be required to install a nitrogen-reducing septic system that services the entire property. The property size on which accessory dwellings will be permitted was increased from 40,000 to 60,000 square feet since the code change was initially proposed.

The laws will take effect in a few weeks after they are filed with New York's Secretary of State.

During the public hearings, Joseph Rose, a former chairman of the New York City Planning Commission and a current member of the village's zoning board of appeals, said zoning code reform was "urgent and overdue." "In my brief stint on the Z.B.A., I have witnessed the impact of confusing regulations, inconsistent enforcement, cynical disregard of the law, and frayed confidence in the integrity of the system," he said. Still, he asked the board to carefully study the potential unintended consequences that may arise from the code changes, and urged them to take incremental steps.

In 2015, after a previous board instituted the new gross floor area calculations, Mr. Rose and Rajesh Alva, both owners of village properties, filed suit in State Supreme Court challenging the regulations, which they said "drastically limit the flexibility of owners of larger lots in building homes and accessory structures, based on little more than rank speculation" that the existing code allowed development out of proportion to the surroundings. Supreme Court Justice Joseph Farneti found the legislation to be valid and constitutional.

On Friday, Mr. Rose and Mr. Alva supported the law's repeal as did Jeffrey Colle, a builder, who said the legislation had had a detrimental impact on the property values of large lots.

Mr. Rose had concerns about the other proposed code changes, however. The proposal to allow alterations to nonconforming buildings "makes good sense," he said, but only if the code explicitly prohibits a change to the use of a structure. A nonconforming garage, for example, should not be allowed to be converted into an accessory dwelling. The law should also expressly prohibit alterations to a nonconforming structure that would increase the amount of gross floor area that lies within a required setback. "As written, the proposed law is ambiguous on this point," he said.

The proposal to exempt flat roof safety railings from being factored into a height calculation is "problematic," Mr. Rose said, because it will encourage the development of rooftop entertaining spaces, which could impact quality of life and the character of the village. Philip O'Connell, a Z.B.A. member, agreed and suggested revising the proposal to prohibit such spaces on smaller lots, or requiring a larger setback from neighboring properties. Mr. O'Connell asked the board to delay a vote on the proposal. "To hear us, and then just pass the law right after, I don't think achieves [the] goal of taking into account and digesting what the public has to say," he said.

Billy Hajek, the village planner, pointed out that the existing code requires an additional six-foot setback for structures with flat roofs.

"I don't think a six-foot setback is going to make a rooftop deck any more attractive to neighbors," said Arthur Graham, a trustee, who voted against the proposal.

Mr. Rose described the proposal to permit accessory dwellings as "the most significant of all the actions being heard today," and an "almost radical change" to land use regulations. "I don't think, given the likely significant impacts, that it has been deliberated enough," he said. The code change would lead to an increase in population density, a surge in construction activity, and the occupancy requirement would be impossible to enforce, he said. "We need to understand how many properties would be eligible for such an expansion, and how it would impact community character," he said.

Mr. Hajek said there were 488 properties of 60,000 square feet or more in the village, some of which may already have existing accessory dwellings, and others that would not have the available gross floor area for such structures.

Andrew Goldstein, a lawyer and former chairman of the Z.B.A., said the concern that accessory dwellings would increase density was a "red herring" because the maximum gross floor area of structures on the property would remain the same. Residents are currently accommodating family members and household staff in their primary residences, he said, so permitting an accessory structure will simply change "the way you live on your property, not how many people live on your property."

Kathy Cunningham, the executive director of the Village Preservation Society, pointed out that permitting accessory dwellings as well as an increase in gross floor area on larger lots goes against the village's comprehensive plan, which recommends limiting the size of accessory structures. She recommended restricting accessory dwellings to properties of 80,000 square feet or more. For the dune walkways proposal, she suggested limiting the width of the walkways to four feet to prevent the construction of decks. She said the need for work force housing was "obvious and great," but she opposed the parking exemption because of a lack of public transportation options, and available parking. "Everyone living in this community needs a car," she said, and a parking exemption will force residents of work force housing to park on neighboring residential streets. She also took issue with the process in which all of the code changes were developed. "No study has been offered that demonstrates a need for these changes," she said.

Zoning code changes, including the gross floor area regulations adopted in 2015, have previously been vetted by the village's planning and zoning committee. Mayor Jerry Larsen said he had hoped to have the committee analyze the proposals, but he was unsatisfied with how slow-moving it had been in its review of a recent proposal to mandate the installation of nitrogen-reducing septic systems upon the failure of a conventional system. He plans to disband the committee, he said. Instead, he asked Vincent Messina, the village attorney, and village department heads to recommend the zoning code changes. "We did do the analysis, and that's why we brought it forward," he said.

Robert Hoguet, who said he opposed the repeal of the gross floor area restrictions and the proposal for accessory dwellings out of concern that they would cause an increase in population in a village that is already overcrowded in the summer, asked the board to provide residents more time to consider the changes before adopting them.

Ms. Cunningham agreed. "I understand that your administration came in full of vim and vigor and ready to make some change," she said to Mr. Larsen. "That's all well and good, and there's been a lot of really great things that have happened since your administration has taken over." She urged him to "permit the kind of public input and collaboration that will make these [changes] much more successful in the long run." She recommended waiting a month before approving the proposals, and using the extra time to hold a special meeting to discuss them with the public. "I don't think it's too much to ask," she said.

Rose Brown, a trustee, and Mr. Graham urged their colleagues to leave the public hearing open, and to delay the vote to provide more time for analysis of potential unintended consequences. "I don't think extra time will hurt anything, it will only help us," said Ms. Brown. She noted that because village department heads and the chairpersons of regulatory boards take part in the planning and zoning committee meetings, it is a "very effective mechanism" to vet such legislative changes. "Yes, sometimes getting to the end result takes a lot of time, but in that process, a lot of good comments and good thoughts come out of it."

Mr. Larsen said Ms. Brown and Mr. Graham had plenty of time to suggest changes to the proposals prior to the meeting, and did not offer any. "I'm not in favor of putting things off," he said. "You know how I work, I like to move quickly, I like to get things done." Public hearings were closed on each of the proposals. Mr. Larsen also provided The Star with written comments from several residents in support of the code changes.

In addition to voting against the roof safety railing amendment, Mr. Graham opposed the parking exemption for work force housing units. "Where are they going to park?" he asked, referring to the prospective occupants. Although he is in favor of repealing the gross floor area law, he voted against it, he said, because he thought the vote should be delayed until the following meeting. He and Ms. Brown voted against the accessory dwelling proposal for the same reason.

On Monday, Mr. Larsen said that taking a vote immediately after a public hearing is bad "optics," and he is planning to institute a policy that would require the board to wait until the following meeting to take a vote. He hadn't delayed the vote on the zoning code changes, he said, because the legislative process was too far along, and no one at the public hearings had made a substantive case against the proposals.