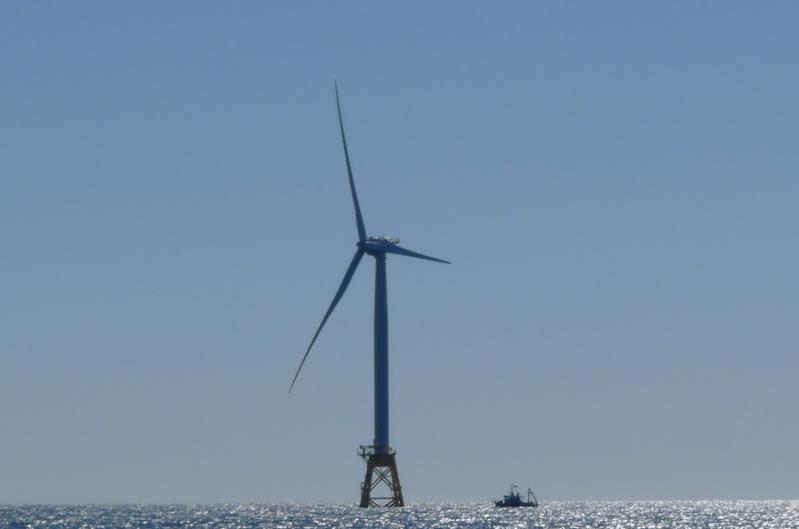 Observations at the five-turbine Block Island Wind Farm, above. and offshore wind farms in Europe "indicate that commercially valuable species like black sea bass, Atlantic cod, and pollock are likely to be attracted to the increased biological productivity these structures would create," according to the federal Bureau of Ocean Energy Management.
Christopher Walsh
By Christopher Walsh

The construction and operation of the South Fork Wind farm is likely to have negligible to moderately adverse impacts on marine life and habitat, with some moderately beneficial impacts also likely. For commercial fisheries, however, moderate to major adverse effects, either temporarily or long term, are predicted, with minor to moderate disruptions on for-hire recreational fishing.

But climate change, other offshore development and vessel activity, and fishing itself will have "continuing temporary to long-term impacts" on commercial and recreational fishing. The wind farm's impact on birds and bats, marine mammals, and air and water quality would be negligible to moderately adverse.

These are among the conclusions of the federal Bureau of Ocean Energy Management's final environmental impact statement on the proposed wind farm, issued on Monday and signaling BOEM's completion of its environmental review.

The wind farm's developers, Orsted U.S. Offshore Wind and Eversource Energy, plan a 12-turbine, 130-megawatt installation to be situated in a federal lease area approximately 35 miles east of Montauk Point. It would deliver electricity to the South Fork via an export cable making landfall at the ocean beach at the end of Beach Lane in Wainscott, a plan that has angered many residents of that hamlet and spurred a drive to incorporate a portion of it as a village.

The wind farm would contribute to New York State's renewable energy requirements, specifically the goal, established in the Climate Leadership and Community Protection Act of 2019, of 9,000 megawatts of offshore wind energy by 2035.

The State Public Service Commission issued a Certificate of Environmental Compatibility and Public Need for the portion of the wind farm within state jurisdiction in March. The East Hampton Town Board and the town trustees separately voted, in January, to execute agreements with the developers allowing the export cable to make landfall and travel below ground to a Long Island Power Authority substation in East Hampton. The developers would make direct payments to the town totaling $29 million over the wind farm's 25-year life span.

The final impact statement assesses reasonably foreseeable impacts to physical, biological, socioeconomic, and cultural resources that could result from the construction and installation, operation and maintenance, and conceptual decommissioning of the wind farm. It is to inform the bureau in deciding whether to approve, approve with modifications, or disapprove the project.

BOEM, according to a statement issued on Monday, is now working to finalize a consultation process consistent with the National Historic Preservation Act and the National Marine Fisheries Service to complete a biological opinion as required by the Endangered Species Act. When those steps are completed, the bureau will issue its record of decision on whether to approve the project.

Publication of the final environmental statement keeps the wind farm on track to be fully permitted by early next year, said Meaghan Wims, a spokeswoman for the wind farm's developers. "South Fork Wind continues to advance steadily through the federal permitting process and we're pleased to reach this latest milestone, the issuance of BOEM's final environmental impact statement," Ms. Wims said by email Monday. Construction would begin soon after all permits are in place, she said.

Construction of the wind farm would disturb and alter fish and invertebrates' habitat, according to the environmental statement, including from the effects of noise and vibration from pile-driving the wind turbines' monopiles into the sea floor (the most intense source of noise), jet-plowing the seabed to lay the inter-array and export cables, vessel and dredging noise, relocation of boulders, and the placement of concrete "mattresses" to cover the cable where it cannot be buried.

It also "assumes that potential construction effects generally diminish once construction ends." However, ongoing operations and maintenance activities "could result in additional impacts for the 25-year life of the project."

The impact statement also acknowledges climate change, which is "altering water temperatures, circulation patterns, and oceanic chemistry at global scales," affecting habitat suitability for invertebrates and finfish. "For example, several finfish species have shifted in distribution to the northeast, farther from shore and into deeper waters, in response to an overall increase in water temperatures and an increasing frequency of marine heat waves."

Ocean acidification, also a function of climate change, "is contributing to reduced growth or the decline of zooplankton and other invertebrates that have calcareous shells," the impact statement continues. "Climate change has also resulted in a significant increase in precipitation on the East Coast, increasing the amount of runoff and stormwater pollutants delivered by rivers to coastal and estuarine habitats," altering habitats' character "in ways that have adversely affected some marine finfish and invertebrate species."

The wind farm's construction "could injure or kill invertebrates on over 2,800 acres of benthic habitat and kill billions of phytoplankton," the statement says, but "these impacts must be placed into context to evaluate their significance." While invertebrates associated with soft-bottom habitat are likely to recover from disturbance within 18 to 24 months, invertebrates like sponges and hydroids "may take a decade or longer to fully recover."

Impacts could be temporary and negligible for mobile invertebrates like adult squid and crabs, and short term and minor for clams and scallops, or long term for other invertebrates. "The latter could be locally significant and, based on the long-term nature of the impact, would constitute a moderate impact."

The inter-array and export cables would alter organisms' environment by generating electromagnetic fields and substrate heating effects. But the cables would be within grounded metallic shielding to minimize effects and buried in soft-bottom habitat. "EMF levels diminish rapidly with distance and would become indistinguishable from baseline conditions within about 26 feet of both buried and exposed cable segments."

The monopiles, their foundations, and scour protection would create an artificial reef effect, it was noted, and "the attractive effect of these artificial reefs on finfish is well documented." Observations at the five-turbine Block Island Wind Farm and offshore wind farms in Europe "indicate that commercially valuable species like black sea bass, Atlantic cod, and pollock are likely to be attracted to the increased biological productivity these structures would create."

The bureau acknowledges a degree of uncertainty with regard to impacts of the South Fork Wind farm on marine life, but is less ambiguous on commercial and recreational fishing when considering the anticipated thousands of wind turbine generators, should all proposed installations be constructed.

"These impacts would occur due to the increased presence of offshore structures (cable protection measures and foundations) that could reduce fishing access and increase the risk of fishing gear damage/loss," according to the impact statement. The extent of impacts would vary "due to differences in target species, gear type, and predominant location of fishing activity." The statement also considers the potential for conflicts between recreational and commercial fishermen as both groups react to changes in distribution of fish species that could result from the existence of wind farms.

Mitigation measures across all offshore wind farms, including turbine spacing and orientation measures, cable burial, and financial compensation programs for fishermen, could decrease BOEM's impact rating to moderate, from moderate to major, the statement contends.

Asked about the "moderate to major" assessment of the wind farm's impact on fishing, Ms. Wims said, "We remain confident that our offshore wind farms can coexist with all other ocean users, including the Northeast's commercial fishing industry. We've already taken steps to support that coexistence, including the reduction of the project's total wind turbines from 15 to 12, and adopting a consistent one nautical mile by one nautical mile turbine spacing."

In addition, Ms. Wims said, the developers' commitment to a gear loss compensation plan is a requirement under the approved joint proposal. It has been in place for almost two years, she said, "and we've agreed to fund five years of fisheries monitoring in New York State waters based on protocols developed through the settlement process."