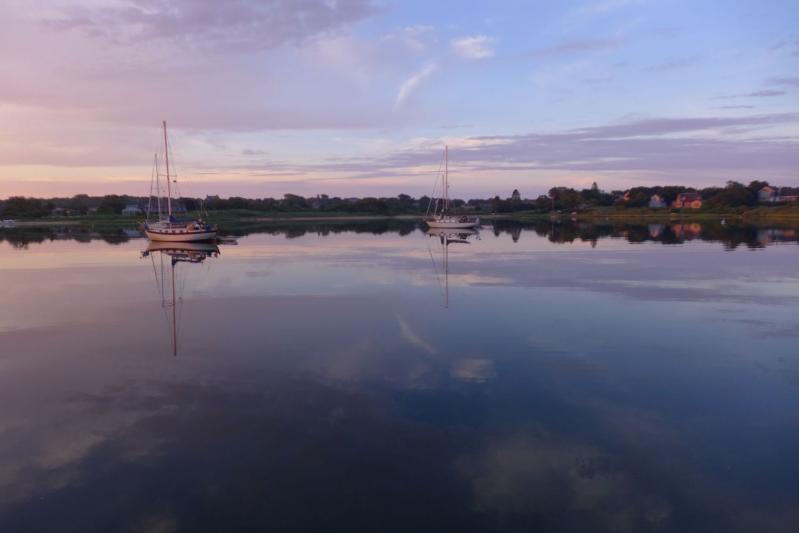 Lake Montauk "is essentially a closed system, which only provides one exit and entry to the environment," said Tim O'Rourke, a Montauk fisherman.
Russell Drumm
By Christopher Walsh

At their first in-person meeting in 16 months, the East Hampton Town Trustees heard from Tim O'Rourke, a Montauk fisherman, who sought their support for a study of striped bass in Lake Montauk. The study, which would be conducted in conjunction with the University of Massachusetts at Amherst and led by Andy Danylchuk, a professor of fish conservation, would tag striped bass in the lake and track them via satellite to compile data.

"The primary purpose of this is to get an understanding of the fish population potentially overwintering in Lake Montauk," Mr. O'Rourke said, "and also their comings and goings and their interaction among other fish in Lake Montauk." The two-year study would start in January, he said, and would require a permit from the State Department of Environmental Conservation.

Over his years fishing in Lake Montauk, "we've noticed a significant population of fish," Mr. O'Rourke said, "and we've seen some fish that are of relatively small size." That has aroused curiosity, he said, "as to where these small fish come from. They don't fit a size class that would enable a fish to migrate from either the Chesapeake Bay or the Hudson River basin," primary spawning grounds for striped bass. Could Lake Montauk harbor a breeding population of the commercially and recreationally important fish, he wondered.

Lake Montauk "is essentially a closed system, which only provides one exit and entry to the environment," Mr. O'Rourke said. "Therefore, it gives them a great opportunity to truly study how these fish come and go throughout the Lake Montauk ecosystem, and what effects the ecosystem has on their behavior." Tagging would also measure the water's temperature, salinity, and other conditions, and the study might be expanded to other water bodies such as Three Mile and Napeague Harbors.

Lake Montauk is not under trustee jurisdiction, but "the trustees are a very fundamental part of research and scientific study such as this," Mr. O'Rourke said. "I felt it was a good idea to come to you first."

Funding sources for the estimated $250,000 project have yet to be identified, said Mr. O'Rourke. He sought recommendations from the trustees, who unanimously agreed to provide a letter of support for the proposed study.

When the trustees had discussed resuming in-person meetings two weeks ago, the matter drew strong reservations and the question was tabled. But this week, the trustees did just that, with eight of nine members in attendance at the Town Hall meeting room on Monday.

Francis Bock, the trustees' clerk, noted earlier that day that as of June 25, by order of Gov. Andrew M. Cuomo, local government boards no longer had the option to conduct remote meetings, so the trustees had no choice but to meet in person.