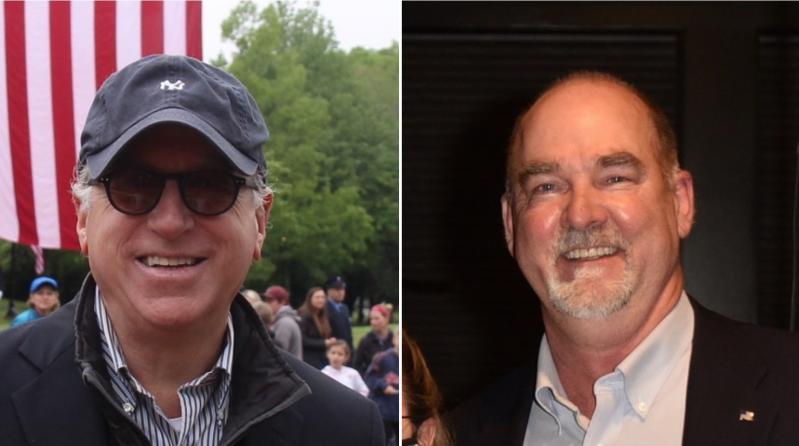 Three weeks before a Democratic Party primary in which East Hampton Town Councilman Jeff Bragman will challenge Supervisor Peter Van Scoyoc, a furious argument broke out among the town board during its work session on Tuesday. Mr. Bragman had seized on a letter from the town's board of ethics that criticized town board members for having taken guests to the May 7 event at the Clubhouse in Wainscott honoring pandemic frontline workers and food pantry staff and featuring a performance by the Rock and Roll Hall of Famer Jon Bon Jovi.

The musician, whose given name is Jon Bongiovi, is an East Hampton resident who set up a branch of his JBJ Soul Kitchen Food Bank at the Clubhouse last year to provide a centralized location for delivery and distribution of food to local pantries. Tickets were not sold for the unadvertised dinner and show, to which the town board and their spouses or dates were invited.

Friday's letter from the board of ethics followed its May 6 letter approving board members' acceptance of an invitation to the private event but specifically warning against their guests' attendance. The May 6 determination, which the board of ethics issued on less than 48 hours' notice, one day before the event, cited a 2014 article in the New York State Bar Association's Municipal Lawyer magazine. Using a hypothetical scenario that did not match the circumstances of the May 7 event, its authors concluded that "a complimentary ticket to a ceremonial event for an official purpose, and even consumption of food and beverages incidental to such attendance, would not constitute a prohibited gift" under General Municipal Law.

"However," the board of ethics continued, its authors "concluded the public official could not accept a complimentary ticket for a guest, as their attendance would not serve any official purpose." Four of the five town board members took spouses or a friend to the event, at which Mr. Bongiovi performed following an open bar and four-course dinner with wine pairings.

In Friday's subsequent letter, Hugh King, chairman of the ethics board, said that the board is of the opinion that "the recent request for the town board members to attend an event" at the Clubhouse "was not done in a manner that would ensure public confidence in our unit of local government."

Members of the town board had been invited to the event, at which they presented a proclamation honoring the Clubhouse for efforts during the Covid-19 pandemic, in a letter dated April 13. They "had ample time to consider whether attending the event would be proper," Mr. King wrote in Friday's letter. "Instead the ethics board had less than 48 hours to make a decision without discussion, debate, or questions."

"Nevertheless," he continued, the board of ethics "agreed to a draft opinion crafted by the town attorney" on May 6 stating that board members could accept a complimentary ticket to a ceremonial event for an official purpose for themselves, but not one for a guest.

The board of ethics "was surprised to read in a local newspaper" -- The Star -- "that three board members brought guests to the event. If the guests were paid for, no problem. If not then those three board members ignored the second part of the opinion" from the ethics board and town attorney.

In response to Friday's letter, Mr. Van Scoyoc told Mr. King in an email that his wife, who volunteered at the town's Covid-19 vaccine clinics, had attended but as a guest of Holly Rubenstein, an owner of the Clubhouse. On Tuesday, Councilman David Lys said that his wife, a physical therapist who had continued her work throughout the pandemic, had also been invited by the hosts.

Even for a board long characterized by angry and protracted arguments between Mr. Bragman and his colleagues, Tuesday's spectacle, during Mr. Bragman's liaison report, was noteworthy for its vitriol. Councilwoman Sylvia Overby and Mr. Lys repeatedly interrupted Mr. Bragman as he discussed the ethics board's second letter and the "apparent violation of some of the advice" it gave.

The bottom line, he said, is that the ethics board "was saying we didn't follow an appropriate procedure, and they felt arm-twisted. It said that the three members that brought guests may have violated a restriction in the letter that was issued."

At one point, Mr. Bragman seemed to echo a remark Mr. Van Scoyoc had made to him more than two years ago, when a controversial settlement with the owner of Duryea's Dock in Montauk came to light. "I wonder whether we worked hard enough on this ethics issue," Mr. Bragman said. "I know I did."

Mr. Lys accused Mr. Bragman of hypocrisy for attending the event without informing the ethics board. "I didn't need to," Mr. Bragman responded. "I wasn't going to accept a gift greater than $75," the limit to the value of a gift a municipal officer or employee can accept. Based on 35 years of legal experience, he said, "I've learned that you don't go close to an ethical line. Our code says you can't take anything worth more than $75, and I wasn't going to do it." He said that he did not stay for dinner and left before Mr. Bongiovi's performance.

"We appreciate that you've been an attorney for 35 years," Mr. Van Scoyoc said. "We also appreciate that this is political season, and that you're running against me as a supervisor candidate . . . and we know that the opportunity for you to get your message out is rapidly diminishing and dwindling."

Mr. Bragman's characterization of the ethics board's letter was inaccurate, Mr. Van Scoyoc said, "and you're trying to connect dots here that don't exist." Mr. Bragman "showed up" at the Clubhouse, he said, "you waited to see if we were all there, trying to spring some little trap that you contrived, but you failed miserably because we actually did our due diligence. And I ask you, what is the ethics involved with coming and drinking three glasses of free wine and driving yourself home before the presentation to the public?"

He returned to that theme repeatedly, overtly implying that Mr. Bragman had drank excessively before driving from the event, and Ms. Overby accused Mr. Bragman of lying to his colleagues about why he left the event early. Instead of telling them he was leaving due to ethical concerns, she said, "you want to make sure that you get your pound of flesh in, because you're prosecuting us every time we have a town board meeting. It's who you are, it's what you do."

"He governs by embarrassing," Mr. Lys said, before adding that, worse, Mr. Bragman would "drag my wife into it."

"This isn't really town business," Mr. Van Scoyoc said. "It's political grandstanding and posturing, and I'd like to move on with the people's work. We have resolutions to offer."

Mr. Bragman continued. "I'm going to make one other comment, and you're not going to cut me off on this. This is town business. This is about transparency, and this isn't me personally attacking. . . ." Mr. Lys began to read the resolution on which the board was to vote, but the argument still had not ended. "When your ethics committee says that the way it was handled did not ensure public confidence in our unit of government," Mr. Bragman said, "that's a serious comment. That's a serious comment."

"You can say whatever you want," Mr. Van Scoyoc answered. "The people of East Hampton know who we are, and much to your chagrin you'll find out it's not going to work for you."