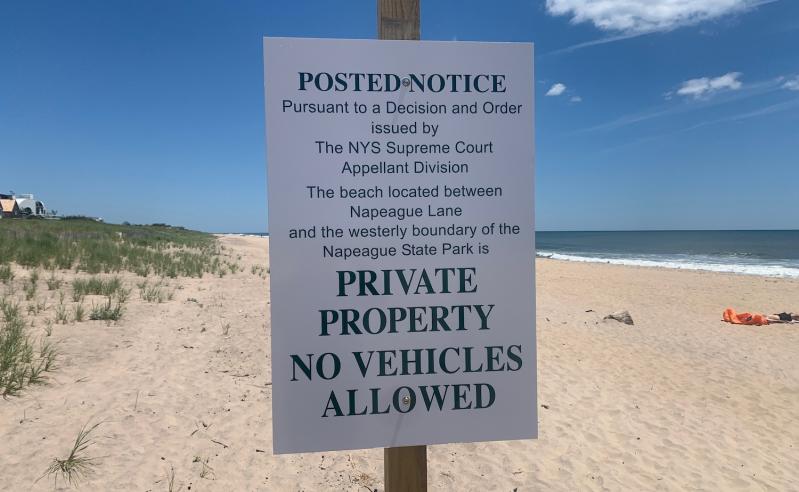 This sign now greets visitors to a stretch of sand popularly known as "Truck Beach."
Doug Kuntz
By Christopher Walsh

An attorney representing East Hampton Town baymen said this week that his clients are prepared to "storm the beaches" if they are turned away from the stretch of ocean beach on Napeague where the New York State Supreme Court Appellate Division ruled earlier this year that town residents have no inherent access rights.

The court ruled on Feb. 3 that plaintiffs in lawsuits brought in 2009 own the beach to the mean high-water mark of the Atlantic Ocean, contrary to the 2016 State Supreme Court decision ruling that an 1882 deed in which the town trustees conveyed some 1,000 acres on Napeague to Arthur Benson "clearly reserved some rights 'to the inhabitants of East Hampton' and, arguably, 'the allowances for some public use.' " Following a court order earlier this month, town officials are enforcing a prohibition of vehicles on the 4,000-foot stretch of sand popularly known as Truck Beach.

But Daniel Rodgers said on Monday that "my clients are not going away. They are going to go to that beach and if they seek to block it, we'll find other ways to do it. They're going to land their boats on the beach. They're going to fish." His clients, he said, include Danny Lester, Nat Miller, and Paul Lester, among others.

The town and the town trustees, defendants in the lawsuits, contended that even if the homeowners associations established that titles to their respective properties extend to the mean high-water mark, the town nonetheless retained the right to allow the public to operate and park vehicles along the beach, including the portion owned by the homeowners associations, based on a reservation in the Benson deed. That contained a clause that "reserved to the inhabitants of the Town of East Hampton the right to land fish boats and netts [sic] to spread the netts [sic] on the adjacent sands and care for the fish and material as has been customary heretofore on the South Shore of the Town lying westerly of these conveyed premises."

The trustees, Mr. Rodgers asserted, "never had the right to do what they did. You don't sell property with a carve-out, you sell it with all rights and privileges." More important, he said, the wording regarding the spreading of nets on the sand and right to "care for the fish and material" clearly establishes fishermen's rights at the beach.

There were wheeled vehicles in 1882, Mr. Rodgers said, the only difference between then and now being how they were powered -- by horse versus engine. "I don't know how a judge will enforce this against people with trucks and a fishing pole," he said. "If they seek to block access by, say, putting boulders" at the beach access at the end of Napeague Lane, "preventing these ocean fishermen from launching their boats, we will storm the beach from the ocean. They're not going to stop us. They can't stop us. We have every intention, and every right as well. If police are there, we're going to walk right past them. If they get cited, so be it. This is something they really feel they have no choice on. This is where they earn their living."

"I'm furious," Mr. Miller said on Monday. "I just think it's a crime that these people move out here, hell bent on destroying the fabric of what this place is. It's just wrong."

In the wake of the Feb. 3 decision, the town posted signs stating that vehicular access to the beach was for fishing and fishing-related purposes only. But on June 4, the court granted the property owners a temporary restraining order demanding that the town "prohibit and prevent any and all driving and/or parking on the beaches owned by the plaintiff homeowners associations" or face being held in contempt of court. "We need to take every step necessary in order to ensure our traditional beach access rights, no matter where they are within the township, and I'm committed to using every possible means to do so," Supervisor Peter Van Scoyoc said last week.

Prior to the 2016 decision in the town and trustees' favor, town officials had been planning to ensure public access by taking the land through eminent domain. The plan was suspended in light of the court's 2016 rejection of the property owners' claims. Mr. Van Scoyoc said last week that the town may pursue that option after all.

Mr. Miller, a former trustee, is unhappy with that governing body and with the town board. "The town had the ability to condemn the beach after the first legal case in our favor, and they didn't," he said. "Deep down, I think the representatives of this town are catering to these people," referring to the plaintiffs. "They had an opportunity to squash this problem and they haven't done it."

Like Mr. Rodgers, he pledged civil disobedience if necessary. "We're not stopping," he said. "If we don't do something, they're going to take everything."
—
Correction: The original caption for the photo accompanying this story incorrectly stated that East Hampton Town had erected the sign. It was not erected by the town.