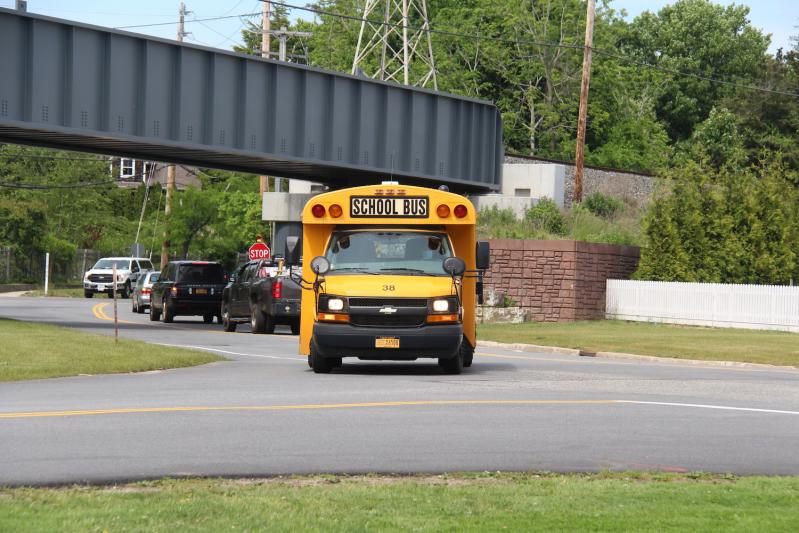 Truck traffic has surged on Accabonac Road since the Long Island Rail Road trestle near its southern end was raised, residents of the road have told the East Hampton Town Board, and the effect, they say, is a diminished quality of life, between the noise and the large vehicles' threat to the safety of pedestrians, joggers, cyclists, children, and pets.

At its work session on Tuesday, the board looked approvingly on a proposal to prohibit trucks greater than nine tons on Accabonac Road between the intersection of Collins Avenue and Floyd Street. An exception would be made for trucks making local deliveries.

In East Hampton Village, however, the village board last Thursday rejected a petition from town and village residents to ban trucks over 18,000 pounds from using Accabonac between Pantigo Road in the village and Floyd Street in the town.

Town Councilman David Lys told his colleagues on Tuesday of a letter seeking that prohibition, signed by some 80 residents of the road. There is currently no weight limit on town roads, and such a prohibition would require a code change, following a public hearing.

A similar recommendation was made by the East Hampton-Sag Harbor Citizens Advisory Committee in 2017, Mr. Lys said, and Stephen Lynch, the highway superintendent, has made the same recommendation. Along with quality of life, Mr. Lys said, "this whole area was freshly paved within the last year." Weight limits would extend the useful life of the subsurface, he said, saving the town money.

In reporting on the petition to the village board last Thursday, Mayor Jerry Larsen said that Mr. Lynch "thinks the truck route should be Accabonac to Collins to North Main Street." Village board members were concerned that such a ban would lead to increased truck traffic on smaller streets in the village. Mr. Graham pointed out that large trucks heading west on Montauk Highway into the village need access to Accabonac Road to go north because they would not have the room to make a right turn from Collins Avenue onto North Main Street. "I think it's a necessary route," said Mr. Graham, and his colleagues agreed.

The trestles on Accabonac Road and nearby North Main Street were raised after numerous truck strikes spanning many years, with the trucks sometimes getting stuck and requiring closing the roads to traffic.

Prior to the town board's discussion on Tuesday, five residents had called in to the virtual work session. "I'm scared to death" about young family members crossing Accabonac Road to get to the sidewalk, said Morgan Vaughan. Others described a huge uptick in traffic, and a dog killed on a road "not designed for what is happening there."

Katy Casey, director of the East Hampton Housing Authority, whose offices are on Accabonac Road, also called to support a weight limit on trucks. The vehicles' size and speed are incompatible on a road "where there are a lot of hidden driveways and absolutely no shoulder," she said. It is a health and safety issue.

Now that their vehicles can fit under the trestle, truck drivers, the callers said, are using Accabonac Road to access Town Lane, used to bypass Montauk Highway when traveling east.

Carla Ash of Town Lane urged the board to "think beyond Accabonac" and continue a weight restriction on her street. "We have constant traffic," she said, with out-of-towners finding alternate routes through "a totally residential area" using smartphone apps like Waze and Google Maps.

"I would agree we need to limit the truck size," said Councilwoman Sylvia Overby. Councilman Jeff Bragman also voiced his support. "Anything we can do to keep the town quiet and rural is better," he said.

Councilwoman Kathee Burke-Gonzalez, who said she drives home from Town Hall on Accabonac Road, also concurred, as did Supervisor Peter Van Scoyoc. When he served as liaison to the East Hampton-Sag Harbor Citizens Advisory Committee, "this was discussed in advance of the trestle raising," he said. "Everybody decided that we were concerned about those potential impacts, but until the trestles were actually raised it would be impossible to know for certain what kind of changes would happen. I believe we're well aware that the changes we were concerned about have actually taken place."

Mr. Lys said he will draft the language of a code change, and a public hearing will be scheduled.