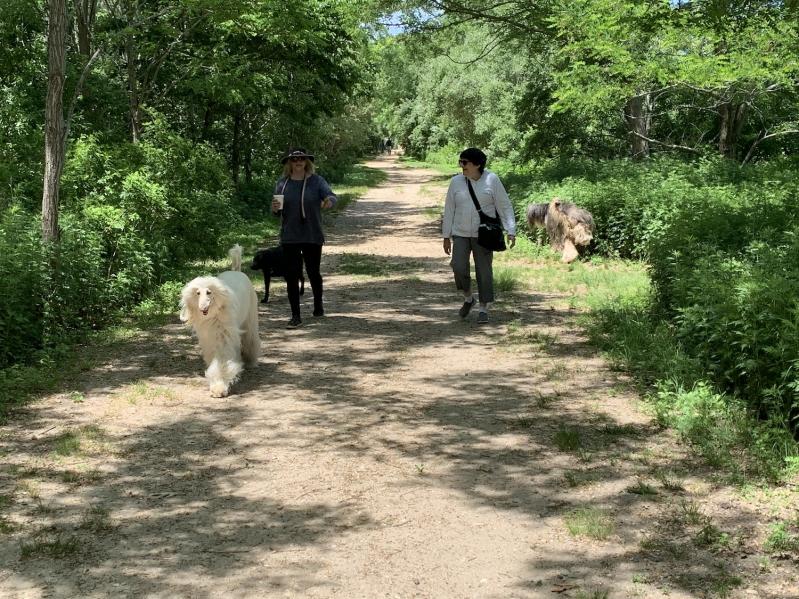 "Don't fix what's not broken" was the message from several dog owners calling in to Tuesday's town board meeting about a 42-acre town property on Three Mile Harbor Road in Springs that is heavily used as a dog park.

In February, after some Springs residents voiced concern about aggressive dogs and fighting among some of them, the town board appointed a committee to address issues about the park, a former nursery acquired by the town in 2002 with community preservation funds, and to solicit input from park users.

On Tuesday, Scott Wilson, the town's director of land management and acquisition, recounted two incidents last fall in which deer had gotten in to the fenced park and were killed by dogs before they could be flushed out. His department, he said, has concluded that trees and shrubbery within the park are too dense for dog owners to see and control their pets, the park's primary rule. A 2009 effort to remove invasive species was only partially successful, Mr. Wilson said.

Neil Kraft, chairman of the town's new Springs Park committee, described "minor changes" to a 2009 management plan aimed at making it safer for people, dogs, and deer alike. Park users, dog safety experts, the town's Animal Control Department, Councilwoman Kathee Burke-Gonzalez, the board's liaison to the Springs Citizens Advisory Committee, and Mr. Wilson were among those the committee spoke with, he said.

"There are rules, a great many of which are violated every day," he continued. Owners, he said, are expected to keep their pets in sight and under voice control at all times; to leash dogs during entry and exit; not to bring any aggressive or ill and contagious dogs, nor any food; to show respect for other park users and neighbors, and to bring only dogs that are licensed and wearing a collar with identification.

"We do think signage is a problem," Mr. Kraft said, meaning that visitors do not read the signs. An existing sign listing the rules is difficult to read and should be replaced, he said, by two large, simplified signs.

The committee also recommended occasional unscheduled visits by animal control personnel to emphasize safety, as well as the addition of two self-closing double gates. The existing gate should be made self-closing as well.

Lastly, the committee recommends a one-acre, fenced-in "small-dog area," though this is less about the safety of small dogs, Mr. Kraft said.

"I do know people who've been run down on those big paths" by large dogs, he said, someone even suffering a broken leg. "Dogs get excited, they run together. My wife has been knocked over." But "if people don't want it, fine. These are not demands. "The small-dog area "is meant to be a resting place for people with small dogs who are afraid of big dogs charging at them."

Before Mr. Wilson or Mr. Kraft spoke, several residents called in, most of them objecting to the recommendations. It is "unfair and undemocratic to make major changes to this public park when you still don't have open public meetings," said Carol Buda. She also urged the board "not to take from one user group to give to another."

There is not a dog problem, rather an "owner-fear problem," said Barbara Feldman. "Don't fix what's not broken."

But another caller, Sara Davison, a member of the park committee, said that several members had interviewed people "who'd really like to use the park, but are leery and unsure about how their small dogs would fare. . . . The argument that there is not enough room for a small dog park is pretty astonishing." There is ample room for all uses, she said.

The board was generally supportive of the committee's recommendations, but Councilman Jeff Bragman, who owns two dogs, told Mr. Kraft he was "much less enthusiastic about removing the amount of vegetation you want to remove." The park is among the town's most beautiful spaces, Mr. Bragman said. "Some things I like are exactly what you want to get rid of -- twists, turns, dense underbrush. I've never had a problem with it." He does not see a need for a small-dog park, he added. "I just think it should stay the way it is."

This is "just the beginning of what a public process would include," Supervisor Peter Van Scoyoc said, and there can be more discussion about the committee's recommendations, including cordoning off an area for a particular use. "It can be an ongoing discussion," he said.