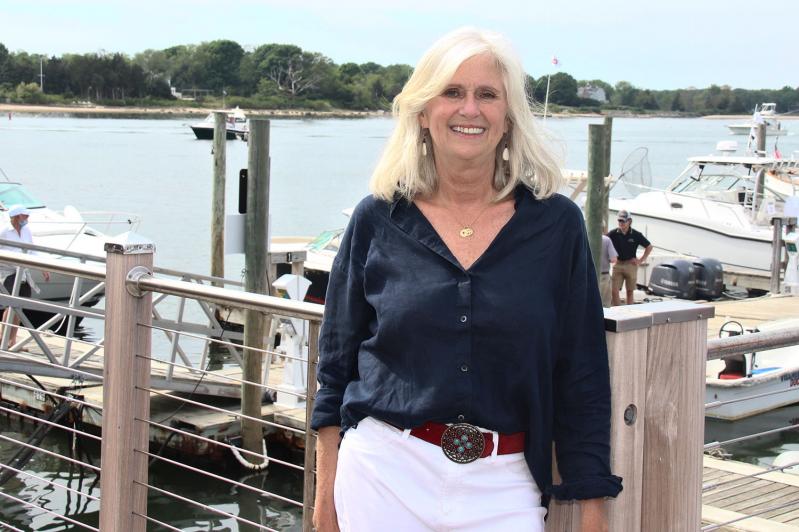 "If we can make sure that no more private residences can be built on our waterfront, no more luxury condos, that will be the most long-lasting thing that I do for this village," said Sag Harbor Mayor Kathleen Mulcahy.
Durell Godfrey
By Jamie Bufalino

Sag Harbor Village Mayor Kathleen Mulcahy, who is running for a second term in the June 15 election, touted her leadership during the pandemic, and said that if re-elected she would continue her efforts to improve water quality and protect the village's waterfront from overdevelopment, and would initiate a village-wide traffic study. Ms. Mulcahy is running against James Larocca, a trustee making his first bid for mayor.

"We have a lot of issues going on in this village, not just waterfront zoning, or developing Steinbeck Park, or the Bay Street Theater, we have water quality issues, housing issues, septic issues, we have a lot of things that need to get done, and we've started getting things done," said Ms. Mulcahy. "But there's a lot more work to do. We didn't get all the way there for a thousand reasons, and Covid is just one of them."

Although the pandemic was an unexpected backdrop for much of her second year in office, "It was good that I was here during Covid," she said. "I was very proactive about the pandemic. I was on the radio at the height of it three or four times a week, going over the numbers, telling people what the rules were, reminding people to wear masks and socially distance. We did a lot of outreach at the time, and I was on about 10 hours of calls each week with the county, the East End Supervisors and Mayors Association, and the Suffolk County Village Officials Association." Sag Harbor Village, she noted, has had "one of the lowest per capita rates of infection on Long Island."

During her first mayoral campaign, Ms. Mulcahy had promised to improve communication with the public, and she has followed through on that pledge, she said. Prior to the onset of the pandemic, she had held regular office hours for discussions with residents, and she re-instituted public hearings at the beginning of board meetings. "I love talking to people one on one, that is the part of the job that I expected and wanted," she said.

In an effort to manage development on the village's waterfront, Ms. Mulcahy has been overseeing the development of a new zoning code, an initiative Mr. Larocca has criticized for being too limited in scope. "I stick by it 100 percent," she said. "Yes, he has criticized it, but I don't think he has spent enough time with it to realize how important some of the elements are," she said. "I really do think that if we can make sure that no more private residences can be built on our waterfront, no more luxury condos, that will be the most long-lasting thing that I do for this village."

She has focused on waterfront zoning rather than developing a comprehensive plan for the entire village, she said, because the construction of the 2 West Water Street condominiums, and the sale of the Water Street Shops property, threatened that part of the village. "It would have been nice to do a comprehensive plan, but the waterfront was in danger, Main Street isn't in danger at the moment," she said. "Honestly, if I'm re-elected I don't know that I'd start on a comprehensive plan, what I would start is a major, village-wide traffic study. Sag Harbor has become a shortcut for the trade parade, and it is just untenable. Our roads weren't made to handle all these trucks coming through. It's dangerous."

She would also continue to focus on procuring grants to pay for the cost of hooking up more residences to the wastewater treatment plant. The village recently received one from East Hampton Town, and is seeking money from the community preservation fund, she said. "We are on the doorstep of being able to expand the sewage treatment plant, and we're looking at how to incentivize people -- especially those who live in low-lying areas -- to put in nitrogen-reducing septic systems." If the owners of waterfront homes on Bluff Point, Glover Street, and Redwood Road installed nitrogen-reducing septic systems, "That would clean up our water dramatically."

"What I've learned from being mayor is that my instincts are good, and I'm going to fight harder for what I believe in," she said. Her effort to garner support from trustees, including Mr. Larocca, on a recent law regulating the use of leaf blowers, for instance, resulted in legislation that she felt was not restrictive enough. "We should have gotten rid of the damn gas-powered leaf blowers. If East Hampton Town can outlaw them, Sag Harbor Village can too," she said. In a second term, "I'm going to try to get things done the right way."