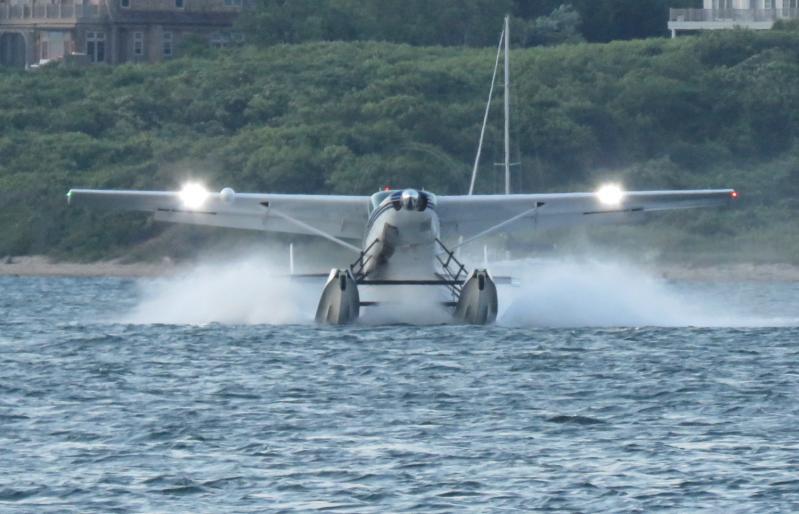 A seaplane landing in Montauk in 2016. Such planes will soon have far fewer places to takeoff and land in the Town of East Hampton.
Jane Bimson
By Christopher Walsh

The East Hampton Town Board, having taken note of a proliferation of seaplanes amid the swarm of aircraft flying over East Hampton in a typical summer, voted unanimously last Thursday to ban seaplanes in waters under the town's jurisdiction.

The board "recognized that the town's economy is tied intrinsically to the use and enjoyment of its natural and scenic environment, including its world-renowned ocean beaches, wetlands, shorelines, harbors, bays, woodlands, and historic hamlets," according to the legislation, which followed a Jan. 7 public hearing.

Last year, William O'Connor, an attorney advising the town on aviation matters, recommended modifying the town code to align more closely with environmental and quality-of-life concerns. Town waters have sensitive marine life and habitat, Mr. O'Connor told the board last year. He cited impacts from seaplanes on fishing and other commercial enterprises, invasive species that watercraft can carry from one body to another, and air and water pollution from aircraft fuel. The town has the authority in its zoning code and police powers to regulate seaplane operations, he said. "The bottom line," he said, is that "seaplanes operating in town waters do raise health, safety, and environmental concerns."

The town trustees, who have jurisdiction over most beaches and waterways outside of Montauk, are supportive of such a ban.

Previously, seaplanes were prohibited from taking off, taxiing, or landing only in seven bodies of water: Three Mile Harbor, Fort Pond, Northwest Creek, Napeague Harbor, Wainscott Pond, Georgica Pond, and Hog Creek. Violators were subject to a fine of up to $250.

The legislation passed last Thursday prohibits seaplanes from taking off, landing, taxiing, mooring, or taking on or discharging passengers on or from town beaches and waterways, trustee waters and beaches, or town docks or floats. The prohibition also applies to helicopters, making exceptions for Gardiner's Island, East Hampton Airport, and the Montauk Airport.

The legislation does not apply to aircraft operated by any federal, state, or local government, emergency services, public or private evacuation services, or any operation by an aircraft in an emergency. It does not apply to seaplane operations that originate from or terminate at Gardiner's Island, but a designated representative of Gardiner's Island must file a written flight plan with the town board's airport liaison.