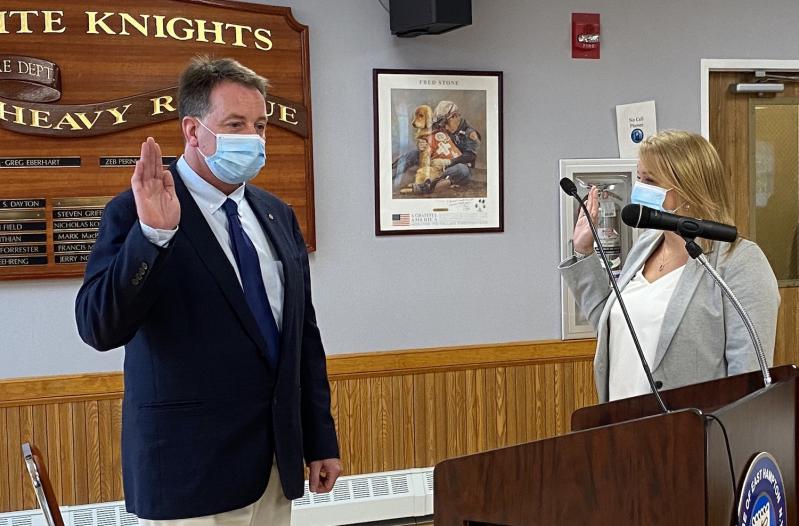 Mayor Jerry Larsen being sworn into office in September. One of his campaign pledges was to enact term limits for mayors and village trustees.
Jamie Bufalino
By Jamie Bufalino

A proposal that would impose term limits on East Hampton Village's elected officials, a tentative budget for the next fiscal year, and the impact of the state's marijuana legalization were discussed at a village board meeting last Thursday. The board also announced that a public hearing will be held on Friday, May 21, on a proposal to convert parallel parking spaces to angled, drive-in ones on parts of Newtown Lane.

Both sides of Newtown Lane between Park Place and Main Street, and the northern and eastern sides of the Reutershan parking lot would be converted to diagonal parking under the plan.

Seeking to follow through on a campaign pledge to enact term limits, Mayor Jerry Larsen proposed limiting mayors to three four-year terms, and trustees to four four-year terms. The proposal received unanimous support from board members. "We need turnover, and new and younger voices," said Arthur Graham. Mr. Larsen asked Vincent Messina, the village attorney, to draft legislation that makes it clear that trustees who serve for four terms would not be precluded from also serving as mayor. The board discussed adding a provision that would allow term limits to be reset for officials who sit out at least one election, and decided to revisit the issue when a law is drafted.

New York State's law legalizing recreational marijuana allows municipalities to prohibit the operation of dispensaries and lounges for on-site consumption as long as a local law is passed by Dec. 31. Nina Fern, an East Hampton resident and the editor of The Highly, an online guide to using and purchasing cannabis, gave a presentation on why it would make sense to have a dispensary in the village. Marijuana is a widely-used, natural medication that is beneficial for "physical, mental, and spiritual health," she said. A dispensary would provide lab-tested products, and discourage people from procuring marijuana from drug dealers. "I don't think saying no because the [village] will look bad is fair," she said.

Mr. Larsen, a former East Hampton Village police chief, said he was concerned about a potential increase in people driving while high. "There should be steep fines and ordinances," said Ms. Fern, who suggested launching an "If you're high, Uber," advertising campaign. The East End is a resort community that attracts visitors from around the country, including from places where recreational marijuana is legal, so "it's in everybody's life," she said. Rather than "demonizing the plant," the village "should opt in, and we should be proud to opt in for the health of the community and our children."

Mr. Larsen pointed out that the board had plenty of time to delve into the issue, and explore how other local municipalities handle it before making a decision.

Marcos Baladron, the village administrator, presented a tentative budget of $24.65 million for the 2021-22 fiscal year. The budget factors in nearly $1 million in estimated revenue, and proposes a 1.5-percent increase in the property tax rate, the lowest in five years. The most significant increase in spending will include contributions to village employees' retirement funds and other employee benefits. "We opted to keep our [revenue] outlook conservative, and focus on expenditures that are imperative," Mr. Baladron said in an introduction to the budget. In an effort to cut down on the cost of purchasing emergency vehicles for an aging fleet, he said, the village is considering entering into more leasing programs. One new expenditure will be a salary for the village's first full-time director of information technology. Hackers have recently attempted several "small grade" attacks on the village's computer servers, he said, so "the time to bring this added level of security . . . is now." A copy of the budget is available on the village's website, and a public hearing on it will be held on June 3.

The village will not exceed the state's cap on property tax increases, but is required to pass a law to allow it to do so; it will be given a public hearing on Friday, May 21. A public hearing on a law that clarifies an element of the beach parking code, making it clear that people without beach permits are not allowed to park in handicapped parking spaces in Lot 1 at Main Beach, will be held the same day.

In other news, now that the state is allowing outdoor social gatherings of up to 500 people, the board discussed making changes to the regulations for catered events at beaches. The village charges nonresidents $500 for a permit to hold a catered event on the beach for more than 49 people. Mr. Larsen said he wants to restrict the number of permits issued to one per night for each beach, and because the East Hampton Trustees own the beaches, he wants to offer them a fee for the use. For those holding a permitted event at a beach, the board is also considering increasing the fee for the use of bathrooms at Main Beach, Two Mile Hollow, and Georgica (which will remain open to 11 p.m.), and to require portable toilets at Wiborg's and Egypt Beaches.

Mr. Larsen received approval from the board last Thursday to terminate a parking enforcement contract with Chase Bank. According to the contract, the village paid the bank $10 a year, and was responsible for parking enforcement and maintenance of the 25-space lot adjacent to the bank, he said. To increase the number of available parking spaces, the village plans to offer Chase, Citarella, Stop and Shop, and 66 Newtown Lane, a commercial building with an employee parking lot, the option to have the village enforce parking regulations for $1,000 per month, and on the condition that the public could use the lots for a limited amount of time. The deal would relieve the businesses of the expense of monitoring the lots and having vehicles towed away, he said.

Glenn Vickers, the president of the East Hampton Chamber of Commerce, told the board that, in an effort to help businesses find workers for the season, the organization will hold a job fair in the village later this month, and it is allowing members to post job openings on its website for free. Although the chamber has canceled its street fairs this year, it will hold drive-in movies at Main Beach once or twice a month through the end of the year, and plans to resume the fairs next year.

Carol Hayes, the organization's business and community liaison, said the group is hoping to build off the success of the weekly farmers market in the Reutershan parking lot by launching a Thursday night market featuring work by local artists and craftspeople. "The success of the farmers market has proven that increased foot traffic is good for all businesses," she said. The chamber is also organizing a weekly live music event at Main Beach that will take place on Tuesdays from 6 to 8 p.m.

In lieu of a Memorial Day parade, the East Hampton Fire Department will hold an observance of the holiday on the Hook Mill green on May 31 at 10 a.m., said Chief Gerard Turza Jr.

The board accepted the retirement of Police Captain Anthony Long, who had served for 30 years. "Tony's been with us since he was a traffic control officer many, many years ago," said Chief Michael Tracey, who credited Mr. Long for leading the efforts to update the department's 911 and radio communications systems, and to develop its accreditation program.

"He will be missed a great deal by myself and the staff," he said.

Mr. Baladron announced that Robert Hefner, the director of historic services, is also retiring after 10 years.