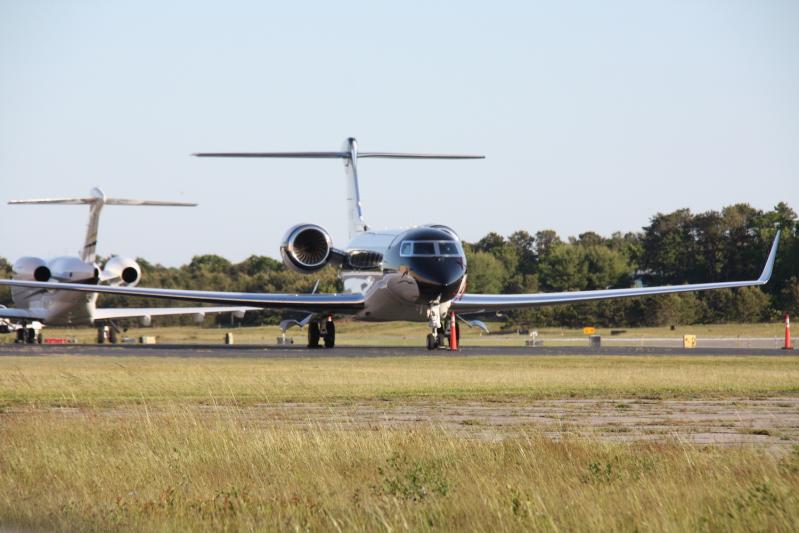 The average spending of those who use the airport is between $500 and $1,300 per trip, the firm found — a higher amount than other visitors, but between just 1 and 3 percent of the town's taxable sales, according to consultants hired by the town.
Durell Godfrey
By Jamie Bufalino

Consultants hired by the town to study aircraft activity at East Hampton Airport, including noise complaints and the potential economic impact of closing the airport, told the town board on Tuesday that after four consecutive years of increases, the number of flights between July 2 and Sept. 30, 2020, was 35 percent lower than in 2019. Of a total of 12,500 flights, land planes accounted for 74.3 percent of activity, followed by helicopters at 18.2 percent, and seaplanes at 6.6 percent (about 1 percent of flights were undefined).

Because of the pandemic, "2020 was a unique year, and it's a bit of an outlier," said Sarah Yenson of Harris Miller Miller and Hanson, who presented the environmental and transportation firm's results. Noise complaints decreased as well, the study found, down 41 percent from the previous year. Complaints about land planes alone, however, rose by 15 percent. Over all, two helicopters — the Sikorsky S76 and the Bell 407 — and one seaplane, the Cessna Caravan C208, received the most complaints.

Sheryl Gold, an East Hampton resident, called in to the meeting to point out that the report did not say how many jets were using the airport. There has been a "huge increase in jet traffic," she said. Patricia Currie, a co-founder of Say No to KHTO, which advocates for a more environmentally friendly use of the airport property, attributed the decrease in calls about aircraft noise to "complaint fatigue," and Kathy Cunningham seconded that opinion. "The lack of a noise complaint does not indicate the lack of a noise event," said Ms. Cunningham.

William O'Connor, a lawyer advising the town on aviation matters, told the board that when Federal Aviation Administration "grant assurances" — which require airport owners who accept federal support to commit to certain obligations — expire in September, the town will have four options. It can allow KHTO to continue to operate as a public use airport; it can negotiate with the federal agency for mandatory noise and access restrictions; it can close the airport, or, in an effort to get around the F.A.A.'s access requirements, it can temporarily close the airport for "some appreciable period of time" and then reopen it with new restrictions, including a ban on commercial flights. "For all intents and purposes, it would be a new airport," said Mr. O'Connor.

As part of their study of the airport's economic impacts, the consultants analyzed passengers' spending and other habits based on 2019 data. (Due to the pandemic, the firm was not able to conduct in-person surveys last year.) Fewer than 1 percent of visitors to East Hampton arrive by air, said Kevin Clyne, a senior analyst. Using cellphone geolocation, the firm discovered that of the 24,000 passengers who flew in, in 2019, 14,000 were East Hampton-bound; the rest were headed for Southampton and other municipalities to the west.

The average spending of those who use the airport is between $500 and $1,300 per trip, the firm found — a higher amount than other visitors, but between just 1 and 3 percent of the town's taxable sales. The estimated number of jobs created by the airport and passenger spending was put at between 100 and 230.

Seventy-five percent of passengers fly here via commercial aircraft, the study found. The firm surveyed passengers who arrived by a commercial flight more than twice during the peak summer months, and found that 52 percent said they would no longer visit if such flights were banned. That would lead to a revenue loss of between $3 and $7 million.

If the airport were to be closed and replaced with parks, hiking trails, bicycle paths, and greenways, Mr. Clyne said, the economic impact would be offset by environmental benefits, an improvement in quality of life, and, for properties near the airport, a likely increase in real estate values.

Jim Stone of Noyac wondered if houses far away from the airport but in flight paths would also get a boost in appraisals. East Hampton Town Supervisor Peter Van Scoyoc asked the firm to study that as well.

Tom MacNiven, a Wainscott resident, said he didn't believe that visitors would abandon the East End just because they couldn't fly here, and even if they didn't return, "any economic damage will be picked up in other ways."

Several other callers expressed concern that closing KHTO would only lead to increased traffic to the private airport in Montauk, and asked the board to conduct a study of the impact of diverting flights from East Hampton. "Closing the airport is not the answer," said Tom Bogdan of the Montauk United citizens group. "You're just transferring the problem to another part of the town."

"You're absolutely correct. We gain nothing if we simply take the problem and put it in another part of town, and I just want to assure you that's not what the town board intends to do here," said Mr. Van Scoyoc, who said a diversion study would be "absolutely critical" before making a decision about the airport.

In a separate matter, Nicholas Rigano, a lawyer who is representing the town in its effort to redress portions of the airport property on which toxic perfluorinated compounds have been found, provided an update. In 2016, the State Department of Environmental Conservation detected the toxic materials, which are used in fire-suppression foam, at the airport as well as at a fire station and a fire training facility on nearby Industrial Road. The D.E.C. ultimately designated the sites as Superfund sites. After the County Department of Health Services discovered the same chemicals in wells at Wainscott residences, the town spent more than $7 million to extend a public water main to the hamlet.

The contamination was caused by the East Hampton Fire Department's use and storage of firefighting foam. To recoup the cost of extending the water main and cleaning up the sites, the town has sued not only Dupont, 3M, and other companies that manufactured the firefighting foam and the chemicals, but also East Hampton Village, which oversees the Fire Department. Some Wainscott residents have also filed a class action lawsuit against the manufacturers and the town.

The town expects to receive permission from the D.E.C. this summer to begin sampling the sites to determine how extensive the contamination is, Mr. Rigano said, a process that should take a few years to complete. Once it is finished, the town will then implement a remediation plan approved by the D.E.C.

A Holiday Gift for Surfers and Beach Lovers
Holiday Lights Go On at the Lighthouse Saturday
Covid Vaccine Clinic at St. Luke's
END_OF_DOCUMENT_TOKEN_TO_BE_REPLACED