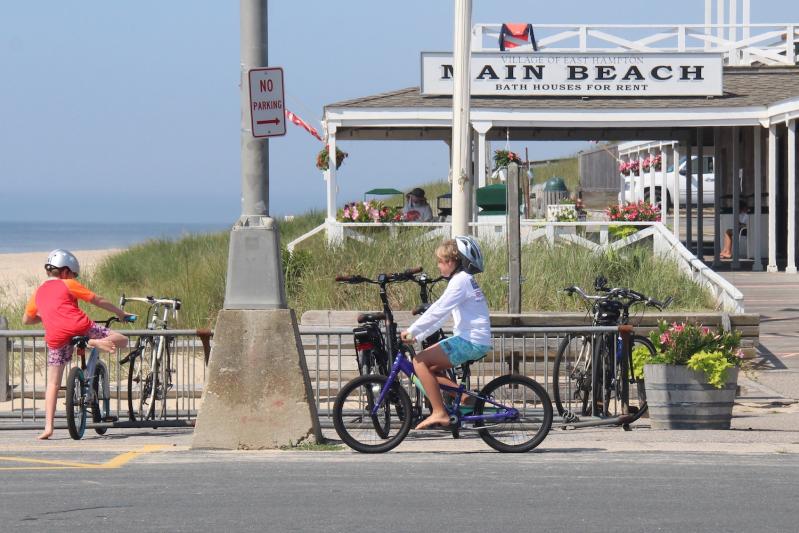 Mayor Jerry Larsen has proposed that the possession and consumption of alcohol on the beaches, currently prohibited entirely, would be banned only during times when lifeguards are on the beach, or, for beaches without lifeguard stations, between 9 a.m. and 5 p.m.
Durell Godfrey
By Jamie Bufalino

East Hampton Village Mayor Jerry Larsen introduced a new scaled-back proposal to charge for parking in the Reutershan and Schenck parking lots at a village board meeting last Thursday, and the board discussed plans to provide free Wi-Fi in the commercial district, to allow Tesla, the electric car company, to install charging stations in the small municipal parking lot on Osborne Lane, and to lift bans on drinking alcohol and smoking on village beaches.

The village plans to allow three hours of paid parking in the lots daily between 8 a.m. and 5 p.m. from May 15 through Sept. 15. Village residents with a beach permit will be able to park for free for three hours, and East Hampton Town residents with town beach permits will be allowed two hours of free parking. The most recent proposal had called for charging all other visitors $2 per hour, but Mr. Larsen said he had heard from several residents and business owners with concerns about that element of the plan. Now, he said, everyone would get two hours of free parking, and East Hampton Town residents and other visitors would pay for a third hour, which would cost $10. The village will also make several free one-hour parking spaces available in both lots, Mr. Larsen said. Parking regulations will be enforced with the use of license-plate reading devices, including ones that will be installed at the entrance and exits of the lots. Anyone seeking to park for more than three hours would have to leave the lots and re-enter to avoid getting a citation.

During his campaign for mayor, Mr. Larsen had taken issue with village laws that prohibit drinking alcohol and smoking on village beaches because they encroached on the East Hampton Town Trustees' authority over the beaches. On Thursday, he took steps to roll back the bans. According to his proposal, the possession and consumption of alcohol on the beaches would be banned only during times when lifeguards are on the beach, or, for beaches without lifeguard stations, between 9 a.m. and 5 p.m. No more than a gallon container of alcohol would be allowed on the beach at any time without a special permit. Smoking a cigarette, pipe, cigar, "or similar smoking substance," and vaping would continue to be prohibited at "any beach pavilion" and in parking lots, but would be allowed at a distance of more than 300 feet from the entrance to the beach, and more than 20 feet from another person. The new regulations will be submitted to the East Hampton Town Trustees for approval, said Beth Baldwin, the village attorney. A public hearing on the proposal will be held at the Friday, April 16, board meeting.

With the expectation that village beaches will be especially crowded this summer, Mr. Larsen said he has asked Jamie Tulp, the beach manager, to be in charge of deciding how many daily parking passes will be issued each day at Main and Two Mile Hollow Beaches.

Shiva Krishna, a market lead for Tesla's Supercharger division, which now operates charging stations in Montauk, Water Mill, and Southampton, told the board his company is eager to lease the Osborne Lane parking lot, where it would install 12 Tesla-specific stations, including one for handicapped drivers, and four chargers that would accommodate other electric cars. He is seeking a 10-year lease with a five-year renewal option. Tesla would pay for the infrastructure construction, and the electricity used at the site, he said, but it would not share revenue with the village. The stations are not profit makers, he said, "it's designed as an amenity [and] our goal is to partner with the towns and private entities who want to bring people to a location to support local business." The company would add shrubbery and other greenery to the site, he said, and the stations would be remotely monitored round-the-clock to ensure that they are operating safely. The lot is near the middle school, and Chris Minardi, the deputy mayor, asked if the stations would pose any dangers to overinquisitive kids who might play around with the equipment. The stations don't transfer electricity until a charging port is plugged into a vehicle, Mr. Krishna assured him. "A middle school science teacher could take them on a field trip, and it would be safe," he said.

The village recently entered into a license agreement with Saunders Broadcasting Corp. to provide free Wi-Fi at village beaches. The company has now offered to provide the service in Herrick Park and in the commercial district, Marcos Baladron, the village administrator, said. A utility closet in the building that contains the park's restroom will be used to house the Wi-Fi equipment, he said. The board approved the proposal.

To celebrate Guild Hall's 90th anniversary, Amy Kirwin, the chief creative officer, asked the board for permission to hang banners featuring photographs from events the organization has held over the years on about 40 lampposts along Main Street and Newtown Lane. The board was in favor of the idea. The banners will be installed "as soon as possible," Ms. Kirwin said, and will remain in place through the end of the year.

The board made it clear last Thursday that it would soon propose a law that would require dog owners to pick up their pets' excrement from sidewalks and other public property. A public hearing on the proposal will also be held at the April 16 board meeting.

Finally, the board accepted the resignation of Ms. Baldwin, effective Friday, April 16, and approved the appointment of Vincent Messina of the Messina, Perillo, and Hill law firm of Sayville as village attorney.