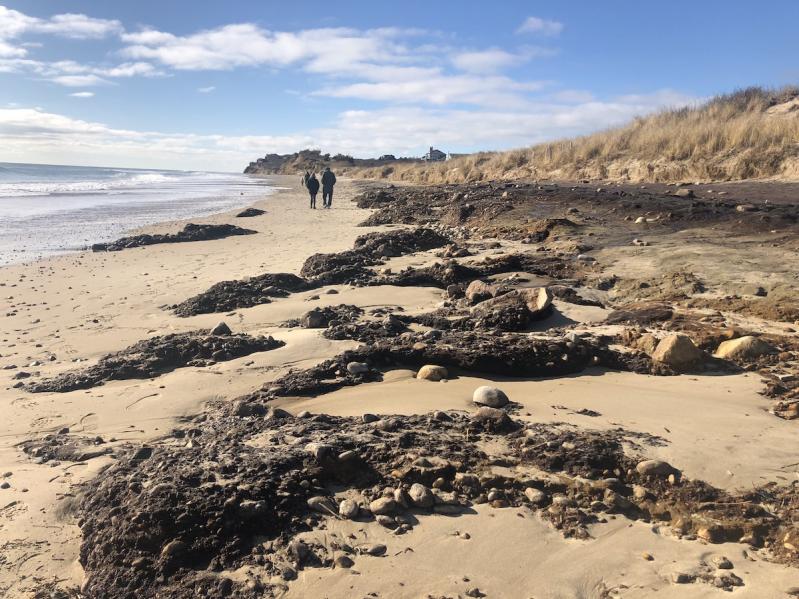 Ditch Plain in Montauk as seen in March of 2021.
Christine Sampson
By Christopher Walsh

As downtown Montauk continues to wait for a long-promised federal government effort to protect its eroded ocean beaches, the Army Corps of Engineers has delayed the project to 2023. This has spurred Concerned Citizens of Montauk to gather almost 1,200 signatures on a petition demanding the project start this year, as the Army Corps had previously signaled it would.

The project provides for hurricane protection and beach erosion control along five reaches of the South Shore of Long Island between the Fire Island Inlet and Montauk Point, a distance of approximately 83 miles of eroded and storm-battered shoreline. It includes the pumping of 450,000 cubic yards of ocean-dredged sand across 6,000 linear feet of ocean beach at Montauk's downtown, where motels and resorts lining the dune are vulnerable to extreme weather and sea level rise.

An Army Corps spokesman told The Star last month that the first contract, expected to be awarded this summer, will be Fire Island Inlet dredging with sand placement at Gilgo Beach and Robert Moses State Park. "This is because real estate is already available for this area and inlet dredging employs different equipment and capabilities," he said. The downtown Montauk sand placement has to be combined with work in the Tiana Beach area of Hampton Bays because the Army Corps "could not economically justify mobilizing a separate dredge" costing several million dollars. The Tiana Beach area, he said, requires substantial real estate acquisition that will take time before the Army Corps can seek proposals and award a contract.

"It has come to our attention," reads C.C.O.M.'s petition at change.org, "that despite many years of planning, the promised replenishment of Montauk's downtown beaches as part of the Fire Island to Montauk Point (FIMP) plan will potentially be delayed by 2 years, leaving the downtown area unprotected against the impacts of climate change and sea level rise." The petition, for which a goal of 1,500 signatures was set, had 1,185 signatures as of Tuesday night.

"Extreme coastal erosion is a very real and serious threat that is happening now," the petition reads. "The beaches and dunes serve as a buffer for downtown Montauk, and replenishing them with pumped sand will buy us much-needed time as we continue working on a long-term solution." Montauk's recently concluded hamlet study includes a recommendation for a planned retreat from the shoreline, though the petition does not reference that proposal. "We will begin to lose options for our community's future if we lose our beaches. We need sand now to protect us."

Supervisor Peter Van Scoyoc told his colleagues on April 20 that he had met with Mark Woolley, Representative Lee Zeldin's district director, to discuss moving the timeline back toward 2021. "We think we stand a good chance of moving it up by a year," he said. The matter will be addressed at the board's next work session, on Tuesday, he said.

Because of the Army Corps's repeated but now inoperative assurances, the town agreed to a one-time interim step in the wake of Superstorm Sandy in 2012: the construction of a reinforced dune with geotextile bags. That controversial plan was implemented in 2015, with the bags regularly exposed by winter storms. The town and county are jointly responsible for annual sand replenishment prior to the summer season, at a cost averaging more than $1 million per year, and will remain so until the federal project is completed.

That work is slated to begin this week, the board having awarded a contract to Patrick Bistrian Jr. Inc. earlier this month. The project calls for 17,000 cubic yards of sand to be deposited on the downtown beach, at a cost of $764,150.