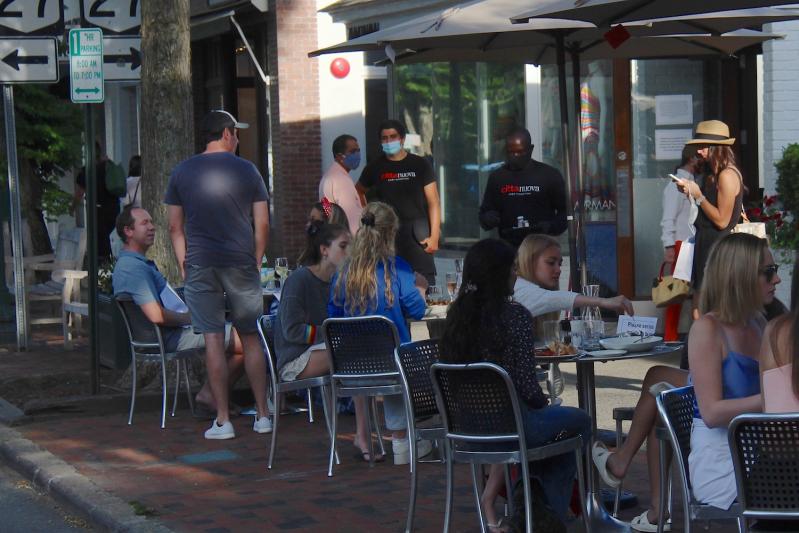 Customers eating at sidewalk tables at Cittanuova last summer. Now, a permit process for outdoor dining will replace the one set up temporarily last year as a means of helping restaurants and food stores during the pandemic.
Durell Godfrey
By Jamie Bufalino

A proposal that will allow East Hampton Village restaurants, including those at its historic inns, to operate outdoor dining areas, and one that will allow the village to sell monthlong nonresident beach parking permits, were approved in party-line votes at a village board meeting on Friday.

Mayor Jerry Larsen, Chris Minardi, the deputy mayor, and Sandra Melendez, a trustee, members of the NewTown Party, supported both proposals, and Arthur Graham and Rose Brown, trustees and members of the Fish Hooks Party, opposed them.

The outdoor dining proposal will implement a permit process to replace the one set up temporarily last year as a means of helping restaurants and food stores during the pandemic. Businesses will be allowed to operate outdoor dining areas annually between April 15 and Nov. 15. Those in the commercial district will be able to use adjacent public property to operate a "sidewalk cafe area," and those with private outdoor spaces -- including in residential neighborhoods such as at the Hedges Inn, and the Maidstone hotel -- will be allowed to have a designated area "where patrons may sit at tables while consuming food and beverages served by a waiter or waitress."

The building inspector will be given authority over permit approval -- including the authority to regulate the design, layout, and appearance of the dining areas -- and will decide the hours of operation for each by taking into consideration "the nature of the restaurant or retail food establishment . . . the character of the [adjacent] neighborhood . . . and the character and nature of other uses in the vicinity of the premises at varying times of day," the proposal says.

Owners can apply to use tents or igloos with heating and cooling equipment as long as they provide documentation that the structures can withstand the elements and adhere to safety codes. Those structures could remain in place for seven months each year if the building inspector deems it appropriate, Vincent Messina, the village attorney, said at the meeting.

During a public hearing on the proposal, Christopher Kelley, a lawyer for the Hedges Inn, which recently won a lawsuit against the village over a 2018 law that prohibited it from holding events outdoors or in tents, praised the board for making outdoor dining a fixture in the village. He asked to have wording added to the legislation that would make it clear that a restaurant and bar are acceptable accessory uses for the historic inns, that, in addition to dining, the inns are allowed to hold special events outdoors or in tents, and that they are not excluded from the village code that permits the owners of surrounding residential properties to have a tent on the premises for 21 days per year.

"Let's incorporate Chris Kelley's suggestions so we don't have another discriminatory issue on our hands," said Mayor Larsen.

Mr. Graham said he is in favor of allowing outdoor dining in the commercial district and permitting the inns to hold special events, but thought there should be separate legislation pertaining to businesses in residential areas. "Extending outside the commercial core is abrogating our responsibility to put reasonable restrictions on the pre-existing nonconforming inns," he said.

The Village Preservation Society also weighed in on the matter. In a letter to the board, the organization said its members "strongly oppose" giving the historic inns permission to have outdoor dining.

Mr. Graham said the proposal should also expressly prohibit the use of a tent or igloo on village sidewalks rather than leaving the decision to the discretion of the building inspector.  He and Ms. Brown pointed out that, at a previous meeting, Thomas Preiato, the building inspector, had asked the board to provide specific guidelines.

Ms. Brown said she is supportive of allowing outdoor dining at the inns and in the commercial district, but voted against the proposal because it gave too much authority to the building inspector. Businesses should be required to have site plans for outdoor dining reviewed by the planning board, she said. She also took issue with the provision that would allow tents to remain in place for seven months.

At a meeting in March, Marcos Baladron, the village administrator, recommended that the village "substantially" reduce the number of daily beach parking permits at Main and Two Mile Hollow Beaches, and instead offer 500 monthlong permits that would allow nonresidents to park at any village beach. Six thousand daily permits are sold each year, he said, but because sales are dependent on weather conditions, they do not provide a reliable revenue stream for the village, whereas a monthly permit would.

By pricing them at $300 per month, just $200 less than a four-month seasonal permit, he said, the permits would not cut into the demand for seasonal ones, and could provide the village with an additional $450,000 in revenue. The number of permits issued over all would be reduced, he said, so the parking lots would be less crowded as well.

"If we can reduce the volume, and increase revenue it's a win-win," said Ms. Brown at the time.

The proposal approved on Friday will allow the village to sell 500 permits each for May 15 through June 30, for the month of July, and for Aug. 1 through Sept. 15.

Daily parking permits are available for $50, and, on weekends and holidays, parking is limited to 60 pay-per-day vehicles at Main Beach, and 40 at Two Mile Hollow. Instead of limiting the overall number of daily permits, Mr. Larsen said at a meeting on April 8 that he has asked Jamie Tulp, the beach manager, to decide, based on parking availability, how many daily parking passes could be issued each day.

The village has sold all of the 3,100 seasonal nonresident parking permits it put on sale this year, and Mr. Graham said about 3,400 village residents are issued permits annually. None of the board members were able to give an exact count of available parking spaces at all the beaches, but Ms. Brown estimated that there were 211 at Two Mile Hollow Beach, 170 in the main lot at Main Beach, and about 100 at Georgica Beach. In its letter to the board, the Village Preservation Society asked that a proper inventory of spaces be done before approving the legislation. Otherwise, it said, it will present "another obstacle for village residents looking for a parking place on a weekend."

Mr. Graham and Ms. Brown said that allowing 500 more people to park at the beaches without reducing the number of daily parking permits would likely lead to overcrowded parking lots. "Originally we were presented with a model that purported to reduce volume by reducing the number of daily passes . . . and now we're saying that we're going to sell both," said Ms. Brown. "I'm afraid that village residents, and those who have a seasonal beach pass might not be able to find a parking spot."

Mr. Baladron said crowding would not be a problem because even if all the 500 monthly passes are sold, it would be far fewer than the 2,600 daily beach passes that were bought last July. The problem with that comparison, however, is that 2,600 daily permits issued for July amounts to a daily average of about 84 visitors, whereas 500 monthly permit-holders would be allowed to park at the beaches each day of the month.

Ms. Brown and Mr. Graham suggested reducing the number of monthly permits to 250. "You say we can leave it to the discretion of the beach manager, but if we sell 500 passes we can't dial that back," said Ms. Brown. "People are going to buy a permit, and expect to get a parking spot. Village residents are going to be irate if they can't get a parking spot." If only 250 monthly permits were issued, the village would still take in $225,000 of new revenue, she said. "That would still be significant, and it would give us the assurance that we probably won't have a problem."

Mr. Larsen said he relies on Mr. Minardi, the board's liaison to the beaches, on matters relating to the beaches, and based on his opinion that 500 permits would be workable, "I'm happy to try it out this year, and make adjustments as we go." Mr. Minardi and Mr. Tulp will be able to effectively manage the parking lots, he assured the board.  "Wow, that's a lot of pressure," said Mr. Minardi.