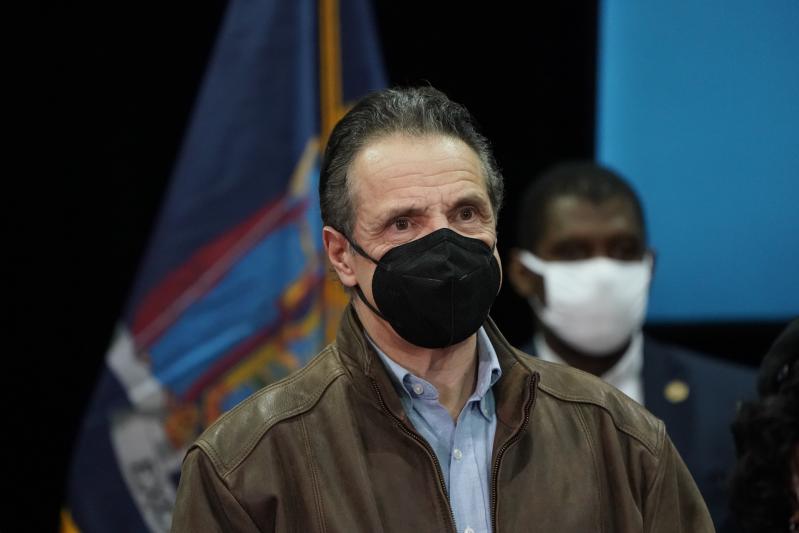 Accused of sexual harassment by three women, Gov. Cuomo on Wednesday apologized and said he will not resign.
Don Pollard/Office of Gov. Cuomo
By Christopher Walsh

A contrite but gently defiant Gov. Andrew M. Cuomo said on Wednesday that he will not accede to calls for his resignation in the wake of accusations of sexual harassment.

The governor spoke at length about three women's allegations of inappropriate behavior in remarks to the press during a regular update on the coronavirus pandemic.

The exchange followed the governor's extensive remarks on allegations of inappropriate touching and remarks.

"I want New Yorkers to hear from me directly on this," he said. "First, I fully support a woman's right to come forward and I think it should be encouraged in every way. I now understand that I acted in a way that made people feel uncomfortable. It was unintentional, and I truly and deeply apologize for it. I feel awful about it and, frankly, I am embarrassed by it. And that's not easy to say, but that's the truth. But this is what I want you to know, and I want you to know this from me directly. I never touched anyone inappropriately. . . . I never knew at the time that I was making anyone feel uncomfortable."

Attorney General Letitia James is assembling a team of outside investigators to examine the sexual harassment allegations against the governor.

In response to another question, he spoke directly of allegations by Anna Ruch, who said that at a 2019 wedding reception the governor had put his hand on her bare lower back, and then put his hands on her cheeks and asked if he could kiss her. A photograph of the incident was recently published.

Melissa DeRosa, the governor's top aide, asked "that everyone refrain from judgment until the attorney general is allowed to do her work. . . . I am incredibly proud of the work that this administration has done to further women's rights, expand protections for women in the workplace, out of the workplace, for reproductive health, the work goes on and on."

The uproar overshadowed the governor's recitation of statistics showing a downward trend in the statewide Covid-19 infection rate, hospitalizations, and deaths. The latest positive infection rate is 3.53 percent, he said. Hospitalizations fell by 46, to 5,433. The number of patients in an intensive care unit fell by 29, and 12 fewer patients were intubated.

Around 160,000 doses of the Johnson & Johnson vaccine will soon arrive in the state, the governor said. "This is, from a practical point of view, not a medical point of view, much easier than the Pfizer [and] Moderna vaccines," he said. "One shot . . . you don't have to schedule a second. And there's no cold storage for the Johnson & Johnson, so it's a very big deal."

All such gatherings will still require social distancing to be observed and the wearing of face coverings.