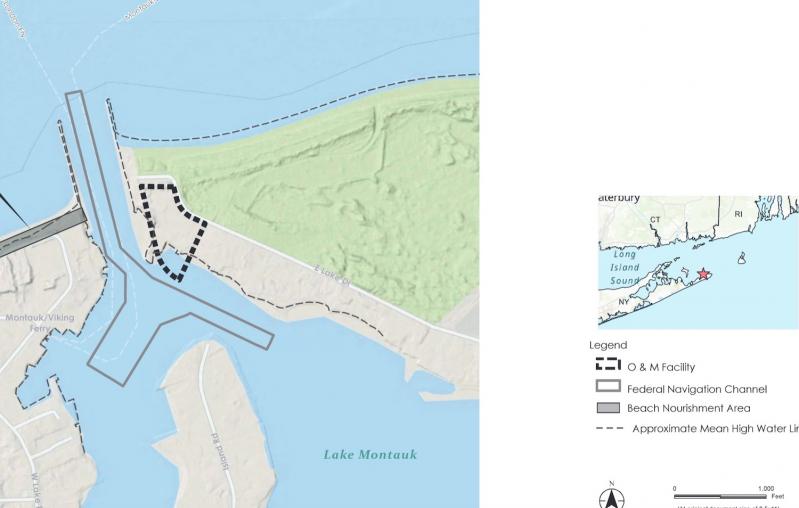 An Army Corps of Engineers' announcement of the public hearing included a detailed description and plans of activity associated with the South Fork Wind farm, including a map showing the proposed operations and maintenance facility in Montauk Harbor.
By Christopher Walsh

The third of three public hearings on the South Fork Wind farm's construction and operations plan, jointly held by the federal Bureau of Ocean Energy Management and the Army Corps of Engineers, happened on Tuesday evening. Public comment must be received or postmarked by Monday.

The National Environmental Policy Act requires federal agencies to assess the environmental effects of proposed actions and of reasonable alternatives. The process collects relevant information for the Bureau of Ocean Energy Management decision maker to either approve, approve with conditions, or disapprove the construction and operations plan. The final environmental impact statement on the offshore wind farm is to be published in August, with a decision due in October.

The bureau is considering the offshore wind farm as proposed -- up to 15 turbines, an offshore substation, and an export cable to supply electricity to the South Fork -- as well as two alternatives: the removal of 6 of 18 potential turbine locations to allow for a four-nautical-mile transit lane, and a fisheries habitat impact minimization alternative, which would identify turbine locations that cannot be occupied or where turbines must be moved to reduce or eliminate impacts to what the bureau describes as complex geology. The former would reduce impacts to commercial fishing, the latter to complex habitat providing important refuge for juvenile fish (known as benthic habitat).

These alternatives were among topics that Brian Frank, chief environmental analyst in the East Hampton Town Planning Department, presented to the town board on Tuesday. After review of the draft environmental impact statement and construction and operations plan, the Planning Department suggested comments the board should make to the Bureau of Ocean Energy Management with respect to the location of turbines and cable arrays, the onshore export cable route, and a proposed operations and maintenance facility in Montauk Harbor, Mr. Frank said.

"Reducing the spacing of turbines could affect the ability of vessels, especially commercial fishing vessels, to navigate safely among turbines," Mr. Frank said. "Anything that affects the location, number, and amount of electricity generated should be fleshed out" in the draft impact statement "in as much detail as possible."

Mr. Frank said that the town should also ask the bureau to identify the installation method for burying the wind farm's cabling between turbines and from the wind farm to its landfall site. Fishermen have raised concerns, for example, about the impact on habitat of the "jet plow" technique, in which a plow is towed by a vessel to create a narrow trench as water jets fluidize the sediment within the trench and a cable is laid into it. The Planning Department, he said, would encourage the bureau to identify which installation methods would create the least disturbance and facilitate the most rapid recovery of habitat. Board members agreed.

The Bureau of Ocean Energy Management is considering the wind farm's export cable landing both at Beach Lane in Wainscott, the developers' preferred location, and state-owned land at Hither Hills in Montauk. For the latter site, "the Planning Department thinks detail is greatly lacking," Mr. Frank said, citing extensive freshwater wetlands "that don't show up on state or federal wetland maps," a high concentration of rare plants, and clearing that would be required for a cable route from the site to the Long Island Power Authority substation in East Hampton.

The draft environmental impact statement makes general references to improvements necessary to facilitate construction of the operations and maintenance facility in Montauk "but details are a bit lacking," such as improvements to docks and additional slips for vessels that would be based there, Mr. Frank said. It is important, he said, to understand necessary changes to any property or whether shore hardening would be required, and to establish that existing commercial fishing operations are not impacted or displaced. Any improvements, Supervisor Peter Van Scoyoc said, would also be subject to site plan review, a separate process.

Also to be emphasized, Mr. Frank and board members agreed, is public access to the beach during the export cable's installation. Although the draft environmental impact statement indicates that installation would happen between September and May, "additional information on public-access restriction should be added," Mr. Frank said.

Public comment at last Thursday's hearing on the draft statement ran strongly in favor of the wind farm, with supporters, including environmental and labor groups, citing the urgency of addressing climate change and ocean acidification. Recreational fishermen were among those citing those issues, while opponents included a commercial fisherman and a member of Citizens for the Preservation of Wainscott, which has sued the town and petitioned for a vote on incorporation of a 4.4-square-mile expanse of Wainscott as a village.