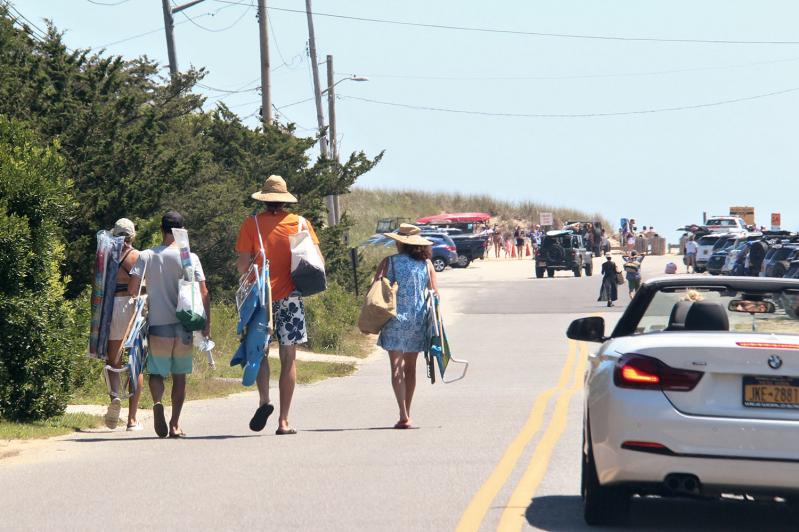 Sales of nonresident beach permits, which allow people to park at beaches such as Atlantic Avenue in Amagansett, were suspended in 2020 to reduce crowding, but this year East Hampton Town will offer a limited number of the permits initially at a higher rate of $500.
Durell Godfrey
By Christopher Walsh

As hopes for a return to normalcy in 2021 gather strength, the East Hampton Town Board is considering the costs and quantity of beach parking and beach driving permits the town will issue to nonresidents, resorts, and co-ops this year.

At its work session on Tuesday, the board collectively predicted "pent-up energy to get out and do things," as Supervisor Peter Van Scoyoc put it, "and beaches are a relatively safe way to enjoy oneself," as demonstrated in 2020.

As vaccines are administered and the coronavirus pandemic is, it is hoped, vanquished, "There will be continued high demand for our beaches," Mr. Van Scoyoc said, "which means high demand for our resources." The town's costs increased last year with the implementation of more stringent cleaning protocols at beach restrooms, more cleaning of beaches, and town employees flooding beaches and their parking lots to enforce social distancing.

"I don't want anyone to misconstrue this as a money grab," said Councilman David Lys. Rather, he said, raising fees is justified to address "very large numbers" in the town's operating budget with respect to what is perhaps its most valuable asset, and taxpayers should not have to shoulder that added burden alone.

The board looked to East Hampton Village, which voted last fall to raise nonresident and daily parking fees for two of its beaches, and unanimously favored commensurate fees. It was agreed that nonresident beach parking permits should cost $500, as the village set its fee last fall. The town's nonresident parking permit cost $375 in 2019, and was to increase to $400 last year. Around 70 were sold in 2020, before sales were suspended in response to the pandemic, Mr. Van Scoyoc said.

The town sold 698 nonresident beach parking permits in 2019, generating $261,750 in nontax revenue. "I suspect we could easily sell more than that this year," the supervisor said. "I don't know why we're underselling our beaches."

He suggested that a limited number be offered initially while the town awaits word from Gov. Andrew M. Cuomo as to occupancy limits in 2021, based on public safety amid the continuing pandemic. But beach occupancy "isn't driven so much by the parking available," he said, and last year demonstrated beachgoers' ability to maintain physical distance. "I think lots will fill before the beaches do. I'm not so worried about occupancy levels at this time." And "the nontax revenue would be an important factor."

Also like the village, the daily parking fee at Kirk Park in Montauk, which was $35 last year, should be raised to $50, the supervisor said.

The board agreed to revisit quantity and cost of beach parking permits issued to hotels, motels, and co-ops pending comment from the town's business recovery committee and the Montauk Chamber of Commerce, but discussion coalesced around a $150 fee. In 2019, Ms. Brennan said, 542 such permits were sold to motels and hotels, which issue them to their guests, and 103 were sold to shareholders of co-ops.

The board is expected to vote on a resolution setting some of the proposed new fees at its meeting today.