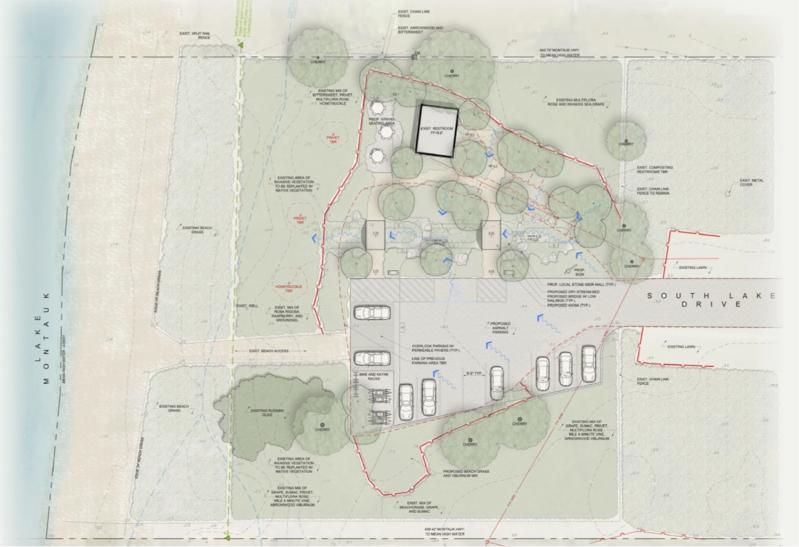 Plans for the beach at South Lake Drive include reconfiguring the main parking area, in part with permeable pavers, which would also be used at the beach access walkway.
LaGuardia Design Group
By Christopher Walsh

The East Hampton Town Board looked favorably on a revised plan to revitalize the southern part of Lake Montauk and the beach at the end of South Lake Drive during its work session on Tuesday.

Following a Sept. 21 presentation, Mellissa Winslow, a senior environmental analyst in the town’s Natural Resources Department, and Ian Hanbach of the LaGuardia Design Group landscape architects returned with a revised conceptual design that Supervisor Peter Van Scoyoc said had a “more natural, softer feel” that eliminated the “suburban or urban park-type feel” of the previous design.

Stormwater runoff is one culprit behind the impaired water quality at the beach there, which was traditionally used by families, particularly those with small children, owing to its tranquil waters. Outdated septic systems in the area and poor tidal flushing are also blamed. Once it was a site for swimming lessons for children, but the Suffolk County Health Department closed South Lake Drive as a public beach in 2005.

Goals there are to make better use of the space, maximize parking, capture and treat stormwater runoff by promoting infiltration and natural treatment, and remove invasive species, Ms. Winslow told the board on Tuesday.

“We went back and looked at the proposed site development,” Mr. Hanbach said, “and tried to find ways we could soften its impact, give it a more natural feel.”

The main parking area is impervious asphalt and bordered by stands of invasive species. It would be reconfigured, in part with permeable pavers, which would also be used at the beach access walkway. An existing public restroom is proposed to be removed, as are the invasive species that are outcompeting and choking out more desirable vegetation, he said.

“We’ve broken down a lot of hard edges,” Mr. Hanbach said of the revised conceptual design, largely by vegetating the site’s perimeter. A dedicated area for kayak and paddleboard storage would be added, as well as a sign at the entrance and an informational kiosk closer to the water. An informal seating area for picnicking and other activities would also be included, he said.

A native-vegetated bioswale, a rain garden that would slow, filter, and promote percolation of groundwater before it reaches the shoreline, is at the heart of LaGuardia’s design proposal. A dry stream bed would see a series of check dams spanning it to filter and reduce the velocity of stormwater runoff from the parking area and South Lake Drive.

Ms. Winslow said that the next step would be to “hand this back over to P.W. Grosser,” the Bohemia engineering firm that is the lead entity on the project, which would be able to prepare an estimated cost. It could then be put out for bids, she said.