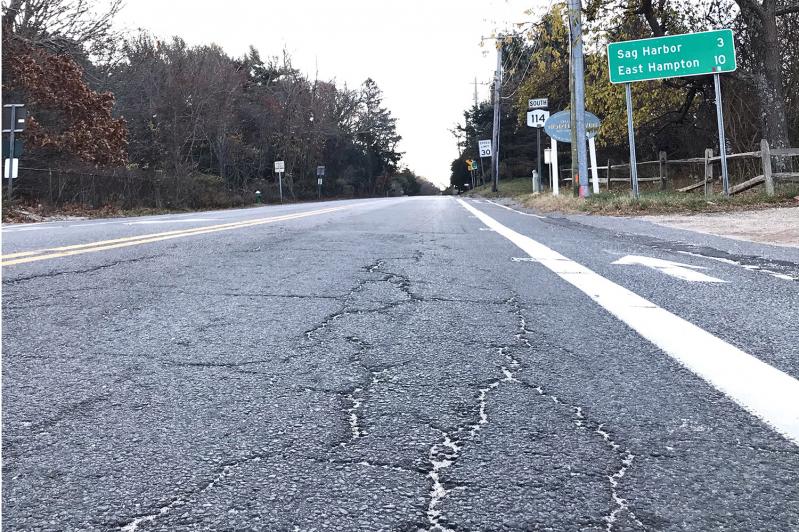 A cracked section of Route 114 on North Haven. The stretch of road between the South Ferry terminal in that village and Stephen Hand’s Path in East Hampton hasn’t been repaved in more than 15 years.
Christopher Gangemi
By Christopher Gangemi

The stretch of Route 114 from the South Ferry in North Haven to Stephen Hand’s Path in East Hampton “has been the full-employment act for front-end alignment mechanics on the East End for too long,” Assemblyman Fred W. Thiele Jr. said by phone last week. That’s about to change, as the road is to be repaved this spring for the first time since 2005.

Preparatory work has already begun. Last week, drivers may have noticed that 114 just south of the Sag Harbor Elementary School was more backed up than usual. National Grid excavated the bike lane to replace a gas main. On Tuesday, feeder roads like Hamilton Street, Eastville Avenue, and Harrison Street Extension were closed to allow the completion of that work.

Dee Yardley, superintendent of the Sag Harbor Village Department of Public Works, was quick to point out that the repaving is a state job, not a village job, despite the effect on roads within the Sag Harbor Village Historic District. (Route 114 is a state road.) “They’re paving that whole shoulder today,” he said by phone on Tuesday morning. “No one can access 114 from any of those streets.”

People have grown accustomed to the dark potholes and black zippers of cracked asphalt that have come to characterize Route 114 these past few years, and it has become known as a dangerous road. Just try crossing the intersection at Bay and Division Streets in Sag Harbor, at any time of day. Aside from the very heavily trafficked Route 27, Route 114 has had more fatalities than any other South Fork road east of the Shinnecock Canal. Add to that the countless near misses, and you have a road with a bad reputation that needs to be addressed.

“My wife walks it all the time,” said North Haven Village Mayor Jeff Sander. “She came home about a week ago and said, ‘I almost got killed.’ “

Bryan Midlam, a cyclist who has been hitting the roads out here for the last 15 years, said over text, “I’ve had car mirrors buzz my elbow.”

The contract to resurface the road was won by H and L Contracting of Hauppauge in October. According to the contract, the asphalt laid in the spring of 2022 should last “10 to 12 years.” The last time the state fully resurfaced the road was in 2005. Assuming the quality of asphalt hasn’t changed substantially in the last 16 years, resurfacing of this heavily trafficked road is now anywhere from four to six years overdue.

So, what took so long?

The New York State Department of Transportation “would say we have roads that are worse than 114,” Mr. Thiele said. “And they weren’t lying.”

“The situation is symptomatic of the larger problem with infrastructure in New York State,” he continued. “There are a lot of state roads in bad condition. Unfortunately, the last administration didn’t care much about the upkeep of existing infrastructure.”

Route 114 “has been bad for some time,” Mayor Sander said. “Assemblyman Thiele finally got this on the state’s priority list. We’ve been very concerned with how bad the bike paths are.”

The bike paths are a problem not just because bikers hit potholes and need to replace wheels and because loose gravel can be deadly for those riding on thin road tires, but also because to avoid potholes they may have to enter the roadway. “I use it as needed but try to get off as quickly as possible. I got into gravel riding because the roads don’t feel safe,” Mr. Midlam said. “The bike lanes on 114 are generous but there’s nothing stopping a car, like a small lip or curb or something.”

It’s a shame that 114 has won this poor reputation. On paper, it should be a glorious road. “The earliest map of Route 114 dates back to 1838, and it shows the road in its present location,” said Joe Zaykowski, a local historian and author. Mr. Zaykowski and his mother, Dorothy, wrote the book, “The Early History of North Haven.”

The stretch to be repaved starts at the South Ferry terminal, a quiet place where one can watch the ferries glide between Shelter Island and North Haven. Heading south, drivers pass through the woods of North Haven and a couple of marshes that hug the Havens Family Cemetery and an open field. The Lance Cpl. Jordan C. Haerter Veterans Memorial Bridge serves as the entrance to Sag Harbor, and offers stunning views of both the sunrise over Sag Harbor Bay and sunsets over Sag Harbor Cove. Passing the windmill at the end of Long Wharf, the road turns toward East Hampton, past the Independent Jewish Cemetery, where a toll booth stood between 1844 and 1905, historic African-American neighborhoods, the Linda Gronlund Memorial State Forest, a large stand of pines, and then finally past the Buckskill Nature Preserve.

It would seem to be the perfect place to promote biking and walking.

April Gornik, a local artist, walks the section of 114 south from the Peerless Marine Center in North Haven to Sag Harbor most days. “It has so many different characteristics,” she said over email. “There’s a little patch of piney woods I love. There are some monster trees. There is gorgeous fall color . . . . I only wish turtles chose another location to cross in the summer, because I’ve seen too many hit by too-fast cars.”

According to Mr. Sander, the state, due to concerns posed by Assemblyman Thiele and himself about pedestrian safety, conducted a study to see if it made sense to lower the speed limit on Route 114, especially between the traffic circle and Sag Harbor Village. But the state came to the conclusion that the speed limit didn’t need to be changed. According to the study, drivers average 45 miles per hour on the road.

“They are going to put in some speed mitigation devices when they do the paving,” Mayor Sander said. “More signage, a wider stripe between the bike path and the road.”

Everyone is wondering if the job will be completed by Memorial Day. Last year, even without a major repaving job, lines of cars headed north to Sag Harbor often extended the three miles south to Wainscott Northwest Road as other work was underway on the road’s shoulders near Sag Harbor.

According to Stephen Canzoneri, a spokesman for the D.O.T., “The resurfacing of State Route 114 between Stephen Hand’s Path and the South Ferry is expected to begin this spring and be completed before the onset of the summer tourism season.”

Between 2016 and 2019 according to the D.O.T., traffic actually eased between East Hampton and Sag Harbor. That said, residents don’t need Department of Transportation statistics to know that since the beginning of the pandemic usage has gone way up.

“I can remember growing up in Bay Point,” said Mr. Sander. “A car would pass every half-hour on Long Beach Road.”

Times have surely changed and post-pandemic funding is finally starting to come through. “I expect to see a lot of capital projects,” Mr. Thiele said.

Early next year, for example, National Grid will be replacing the gas mains on Main Street.

“It’s gonna be painful for all the people involved. There’s not going to be any way around it,” said Mr. Yardley. “And that’s if the weather cooperates.”