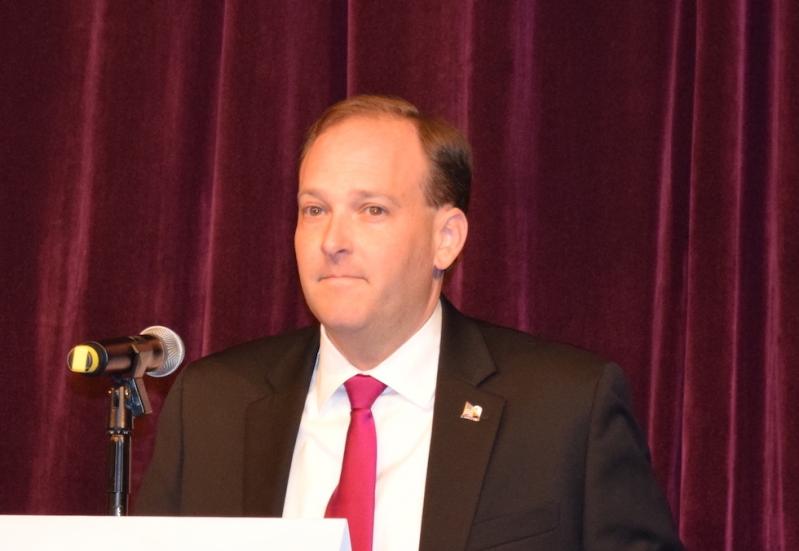 Following his sustained efforts to overturn the results of the 2020 presidential election, Representative Lee Zeldin of New York's First Congressional District, one of former President Trump's most loyal supporters, is facing a growing backlash.

In the wake of the Jan. 6 insurrection at the United States Capitol, which resulted in five deaths and delayed the joint session of Congress's formal certification of the electoral results, the congressman, who was re-elected to a fourth term in November, faced a Jan. 11 protest outside his district office in Patchogue and the circulation of petitions calling for his resignation or condemning his actions.

On Friday, 22 active and retired lawyers, most of them Mr. Zeldin's constituents, took a further step, filing a complaint with the Attorney Grievance Committee for the Supreme Court, Appellate Division, in Albany, charging violation of "the most fundamental ethics rules, including participating in frivolous litigation, making false statements regarding the presidential election, and committing, arguably, a criminal act that reflects on his trustworthiness."

Katie Vincentz, a spokeswoman for Mr. Zeldin, noted in an email that "nearly every single one of these attorneys is a registered Democrat" and many have donated to Mr. Zeldin's opponents. "The eagerness of these partisan Democrats to further divide our community and country is despicable," she said.

The attorneys, most of them Democrats and several of them residents of East Hampton Town, seek "an immediate investigation" of Mr. Zeldin's actions in the period following the Nov. 3 election and consideration of sanctions "up to and including revocation" of Mr. Zeldin's license to practice law in New York State.

They cite the state's Rules of Professional Conduct, specifically a rule stating that "a lawyer shall not bring or defend a proceeding, or assert or controvert an issue therein, unless there is a basis in law and fact for doing so that is not frivolous." Mr. Zeldin violated this rule, they wrote, in joining the amicus brief in support of a lawsuit brought by the attorney general of Texas that sought to invalidate the certified election results and throw out the presidential electors in four states, all of which were won by President Biden in the Nov. 3 election. The Supreme Court rejected the suit.

Mr. Zeldin did so "despite the fact that numerous courts in eight different states . . . had already dismissed such meritless claims," the attorneys wrote. They charge that his support of that lawsuit "was not only frivolous but constituted professional misconduct" according to the Rules of Professional Conduct. "By perpetuating the lie that there had been widespread voter fraud, an allegation for which there was no evidence," he engaged in "conduct involving dishonesty, fraud, deceit, or misrepresentation," they wrote.

The congressman undermined confidence in the integrity of the election process, the attorneys wrote, by publicly questioning the election's outcome, which was certified in December, "in the absence of any evidence of systemic malfeasance or fraud," and making "the demonstrably false statement that 'election laws and state constitutions were blatantly ignored . . . to tilt an election in a different direction.' Such dishonesty evinces a blatant disrespect for the judicial system -- if not an outright rejection of the legitimacy of the courts -- and a flagrant disregard for the interests of his constituents, whom he confused and misled."

Following the Jan. 6 attack on the Capitol, which itself followed a rally at which Mr. Trump and associates urged supporters to march to the Capitol and "fight like hell," Mr. Zeldin "again asserted his baseless objections to the election results," taking to the floor of the House of Representatives to challenge the results in Arizona and Pennsylvania "in a speech riddled with misinformation and misrepresentations," the attorneys wrote.

Mr. Zeldin "has clearly violated the Rules of Professional Conduct and should face the severest sanction possible," the attorneys wrote. The New York State Bar Association, they said, "must send a powerful message to the public that the legal profession is committed to the defense of our democratic institutions and will not tolerate the conduct of attorneys who seek to subvert the will of the people, undermine our elections, and recklessly contribute to the incitement of violence."

The lawyers are not an organized group, said Amy Turner of Wainscott, who was in general practice until her retirement. "I was very concerned about what Representative Zeldin has done," she said on Tuesday, "and thought it was important that the grievance committee consider it. The other lawyers felt that way, too." She is confident that the grievance committee will conduct a thorough investigation and fair hearing, she said.

Christopher Kelley, a Democratic committeeman in East Hampton who also signed the letter, said that Mr. Zeldin had committed "a clear violation of the oath attorneys take and what they're supposed to do in terms of their conduct," namely "not perpetrate lies and be involved in frivolous conduct, especially litigation to the Supreme Court." Attorneys "have been disciplined for a lot less," he said.

"It's one thing to be a guy in the street who's a rabble rouser," Mr. Kelley said. "It's another when it's a lawyer and officer of the court. You have a different responsibility, which is spelled out in legal ethics and codes of professional responsibility. You're not supposed to do stuff like this, and you're supposed to get in trouble if you do -- or lose your ability to practice law."

Also among the lawyers signing the letter to the Attorney Grievance Committee are Jeanne Frankl, a former chairwoman of the East Hampton Democratic Committee, Jeremiah T. Mulligan of East Hampton, Jonathan Wallace of Amagansett, and Bruce Colbath of East Hampton.