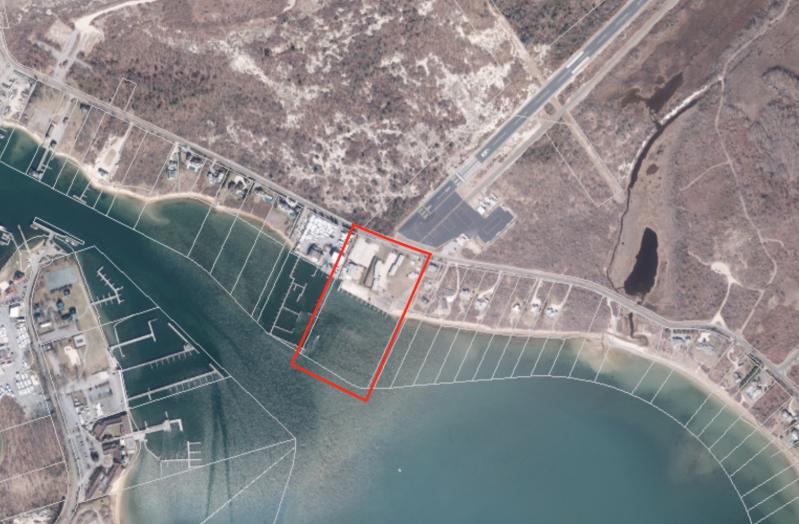 A resort proposal for the property at 435 East Lake Drive in Montauk would need not only East Hampton Town approvals, but review by the State Department of Environmental Conservation, and, because it is across the street from Montauk Airport, the Federal Aviation Administration.
Suffolk County GIS
By Christopher Gangemi

The new owner of the former Rick’s Crabby Cowboy Cafe in Montauk has big plans for the property, but they are far too big, the East Hampton Town Planning Board told his attorney last week.

At the Dec. 15 planning board meeting, board members reviewing the proposal for 435 East Lake Drive seemed to have a difficult time taking it seriously.

“I don’t want to pull any punches,” said Lou Cortese, a board member. “I just want to emphasize that this project is way out of bounds. It is way too large. There are so many different problems with it.”

In April, Rick’s Crabby was sold for $13.9 million to Jeremy Morton, a real estate developer who has in recent years purchased Cyril’s on Napeague, Provisions in Water Mill, and Ruschmeyer’s in Montauk, among other properties. The East Lake Drive property is five acres and includes 6.75 acres of additional underwater land with 22 boat slips. Mr. Morton is proposing a 14-unit resort, a single-family residence, a 110-seat restaurant, and a bar, swimming pool, and fitness center.

“I understand and appreciate that this is a big application,” conceded his attorney, Brian Matthews of Matthews, Kirst, and Cooley but he argued that “a number of significant environmental benefits” would become apparent as the board reviewed the application.

There were many issues that the town planner Marco Wu found with the proposal. The most intractable, however, had to do with septic issues and runoff due to the large scale of the project.

According to Mr. Wu’s site plan evaluation, to accommodate the amount of septic usage forecast for the resort buildings, substantial regrading would be necessary. An unspecified amount of imported fill would be needed “in order to meet the minimum separation to groundwater for the new sanitary systems.”

In fact, according to Mr. Wu, three quarters of the five-acre site would need to be raised anywhere from four to five feet above existing grade. Because of this, runoff onto neighboring properties and into Lake Montauk could be problematic.

The developers seek a wastewater flow of over 5,000 gallons per day, “nearly double the allowable flow on a property abutting Lake Montauk,” Mr. Wu said in his report. Because it is on the lake, “the parcel is a significant coastal fish and wildlife habitat and is a scenic area of statewide significance.”

Complicating matters further for the developer, the application would require review from the State Department of Environmental Conservation, because the property is on Lake Montauk. And because it is across the street from Montauk Airport, the Federal Aviation Administration would also need to sign off.

Mr. Matthews touted the revegetation plan, including “significant benefits to ground and surface water,” because of the new septic system, and “aesthetic benefits” from redeveloping what he described as a run-down property. The planning board, however, was more focused on the outsize scale of the project and concerns with its ability to even conform to the basic standards of the zoning code. They were, in short, having none of it.

The application, “takes the cake in terms of intensification,” said Sharon McCobb, another board member.

“The variance needed for the size of these units is tremendous,” she said, “I don’t see the zoning board passing that.” She also called out Mr. Matthews’s assertion that the septic system would be an improvement for the site. “You’re not improving your sanitation flow when you’re allowed half of that if you were to go with today’s standards.”

“I think the sanitary flow being double what would normally be allowed is alarming,” Mr. Cortese said.

Randy Parsons, another board member, perhaps put it most succinctly by saying, “Bring us a conforming application for starters.”

“When you have to elevate the entire property by five feet just to accommodate the septic system,” Kathy Cunningham, the board’s vice chairwoman, “it kind of tells you something about the area you’re building in.”

“I think you have to start over,” she said. “It’s just too damned big.”

Mr. Matthews pushed back. “This is not set in a bucolic area, this property itself,” he said, despite the frontage along Lake Montauk. “There’s a right to redevelop the property. Nothing stays the same, like it or not,” he continued. “Does it push the envelope a little bit here, this initial filing? Yeah, sure.”

“Do they want to try and maximize what they do?” he asked, rhetorically. “Well I think, who wouldn’t?”

“You’re allowed to have a resort here,” he concluded.

“It behooves everybody to come up with a plan that fits,” Mr. Calder-Piedmonte said.

“Looking at parking, the size of the units, the flow, the number of units, the grade, all those things we should get to a scale that’s reasonable,” he said.

Samuel Kramer, the board chairman, ended the meeting by saying, “I think that the message has gotten across. We will see you in the New Year and we’ll see where we go with it.”