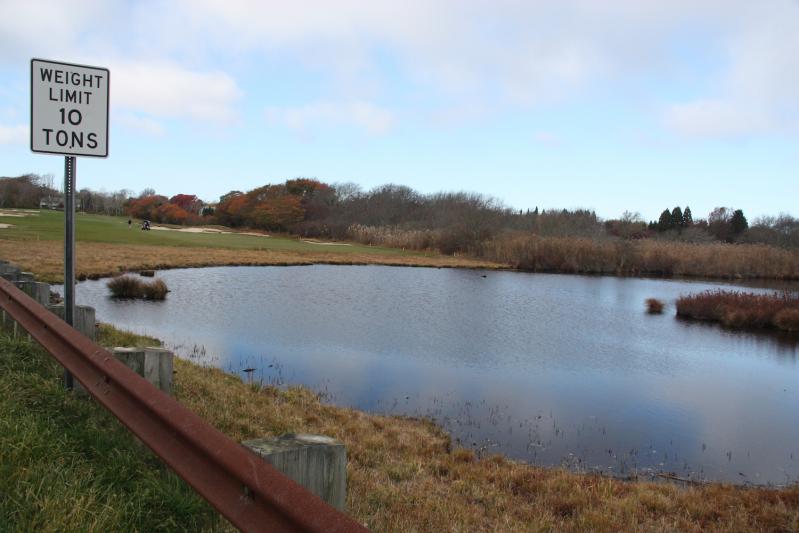 Hook Pond is directly affected by the nearby Maidstone Club golf course, which Christopher Gobler of Stony Brook University’s School of Marine and Atmospheric Sciencessaid accounts for 6 percent of its nitrogen load.
Durell Godfrey
By Christopher Gangemi

After hearing a report from Christopher Gobler of Stony Brook University’s School of Marine and Atmospheric Sciences on the impact of wastewater on the village’s drinking water and water quality in Georgica and Hook Ponds, the East Hampton Village Board voted on Friday to create a central sewer committee with Mayor Jerry Larsen as its chairman.

Dr. Gobler, who has studied eastern Long Island waterways since 1992, spoke about the concept of a watershed and how what happens in the village affects nearby water bodies. “Every single parcel has either a cesspool, or a septic tank attached to a cesspool. The fact is, they remove zero nitrogen,” he said. “What they’re designed to do is take the wastewater and it then seeps directly into our groundwater. That’s what we’re drinking and it also goes into our service waters.”

“That’s why sewering is so important,” he said.

In Georgica and Hook Ponds, high levels of nitrogen have led to harmful blooms of cyanobacteria, or blue-green algae, he said. Such blooms have been linked to cancers and animal deaths. In 2012, a dog died of liver failure after an unattended romp around Georgica Pond. Tests shortly after revealed the presence of cyanobacteria in the pond.

When blooms occur, they pull oxygen from the water, which has a negative effect on marine life. Both ponds have, at times, been closed to swimming, fishing, and shellfishing because their algae blooms exceed the allowed threshold.

Dr. Gobler’s study shows that over 50 percent of the nitrogen load in both ponds comes from human wastewater. At Georgica, an additional 35 percent comes from lawn fertilizers. Hook Pond is directly affected by the nearby Maidstone Club golf course, which Dr. Gobler said accounts for another 6 percent of its nitrogen.

“Sewering the entire village is not realistic,” according to Dr. Gobler, but the study showed that even sewering specific locations and upgrading septic systems across the village would lead to significant improvements in water quality.

“You are looking at reduction in the nitrogen loading to Hook Pond of more than 50 percent,” Dr. Gobler said. Sewering is a “very active way of addressing the nitrogen loading,” which would also immediately “improve the quality of drinking water in the village.”

While the cost of the project has yet to be determined, Dr. Gobler said he would soon make some broad estimates. The main cost, he explained, comes from the construction of a wastewater treatment plant. After that it’s the per-foot cost of running the sewer lines. With money available through the community preservation fund and also potentially through the federal infrastructure bill, he predicted paying for upgrading individual septic systems would not be a problem.

Rose Brown, a village trustee, suggested a partnership with East Hampton Town, as certain areas of the study — near the high school and on North Main Street — were outside of the village. “It would be great to have some cooperation and coordination with the town on those areas,” she said.

“Sewering you will get probably the maximum amount of removal,” Dr. Gobler said.

Mayor Larsen was enthusiastic after the report. He pointed out that the benefits of installing a sewer system were “even beyond what we believed.”

Creation of a sewage treatment system for the village’s commercial core was one of the central issues of Mr. Larsen’s 2020 campaign, but finding a suitable location for a treatment facility has proven elusive. Two sites proposed earlier this year — a vacant lot north of the railroad trestle on North Main Street and an Accabonac Road parcel outside of the village that is home to the village’s Department of Public Works — turned out to be unworkable for different reasons. The village then turned its attention to the long-term parking lot off Lumber Lane. In September, the village hired a new engineering firm, Lombardo and Associates, to oversee the effort to develop a sewage treatment system.