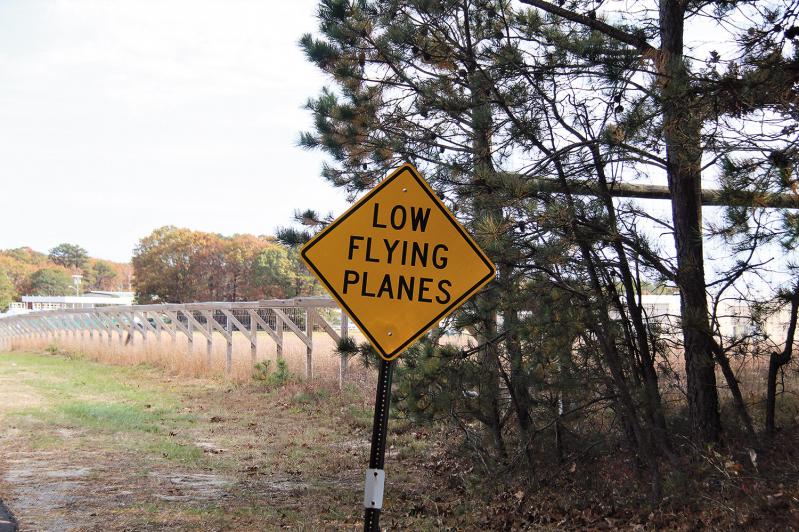 With another report in hand, the East Hampton Town Board is moving closer to a decision on the future of East Hampton Airport.
Durell Godfrey
By Christopher Walsh

Consultants to the town who have spent the last few months fact-finding on the future of East Hampton Airport reported to the town board on Tuesday about community support and opposition, and the economic implications of closing the airport or, alternatively, imposing certain restrictions.

With the September expiration of Federal Aviation Administration funding, the town can take control of the airport. It could allow flights to continue as they are, close the airport and reopen it with limits or curfews on air traffic (i.e., banning commercial flights), or close it permanently and put the site to a new use.

With helicopter and jet traffic surging in recent years, many residents have implored the board to shut down the facility or enact curfews and restrictions. They have cited a quality of life in ruins, with nearly continuous flights overhead during the summer season. Others, though, have insisted that the airport is essential to the town economy, though a study indicated the economic impact of closing it would be minimal.

The consultants, Peter Flinker and Lisa Liquori, were tasked with identifying the range of positions and clarifying the underlying interests of each group so they could be viewed objectively.

“Increased traffic at the East Hampton airport in recent years has created growing concerns about noise pollution, public health, safety, environmental, and climate change impacts,” they wrote in their summary report. “These impacts are not well aligned with East Hampton’s identity as a resort community, and its commitment to sustaining the quality of life and the quiet enjoyment of its rich natural, cultural, and scenic resources.”

On the other hand, “the airport also provides positive values to the community including employment, economic, and recreation opportunities as well as access for emergency, medical, and civilian services.”

But the overwhelming consensus is that the status quo is insupportable, Mr. Flinker said, with 80 percent of respondents calling it unacceptable and just 5 percent saying it is acceptable. However, 80 percent also support keeping the airport open with restrictions, versus 20 percent who say it should be permanently closed.

The airport serves a limited percentage of the population, Mr. Flinker told the town board, and for many no compromise is possible, as leaving it open invites “a slippery slope.” The airport serves “the proverbial 1 percent,” he said, and its opponents say that “the community should take precedence over the individual.” Those living in the vicinity of the airport say that all helicopters and jets should be banned, and other uses of the property, to benefit the town, should be explored.

Residents of Montauk are fearful that closing the East Hampton airport would divert much of its traffic to the small, privately owned airport there. If restrictions are put in place in East Hampton, they should work for both airports, they said, and there should be a regional system of rationing the number of landings.

Those in the aviation industry, not surprisingly, argue that the airport is an important community resource. Quieter planes and electric aircraft are on the horizon, they say, which would resolve both noise and pollution concerns. But local pilots, according to the consultants, support a reduction of helicopter and jet traffic, and many would be happy to eliminate all commercial flights and/or restrict operations to smaller prop planes. Landing fees might be based on aircraft size and/or noise level.

Changes suggested during a series of workshops in September included reducing the length of a runway, eliminating one or more runways, and eliminating fueling at the airport. Use might be restricted to local pilots or local landowners, and recreational aircraft and emergency use only. A minimum altitude could be mandated, and routes regulated and adjusted.

Other suggestions made during the workshops included the town’s purchase of the Montauk airport and the improvement of mass transit and other transportation options.

The public engagement process, Supervisor Peter Van Scoyoc said, “has been very effective in highlighting issues and attributes of the airport and concerns that members of the public have” regardless of their particular position as to its future. “To have a calmer, more reasoned and rational, maybe less emotional engagement with the public over this very important issue has been very helpful.”

The consultants have brought the board to a point where, “when decisions are made, we’ll be able to back up those decisions,” said Councilwoman Sylvia Overby.

“I think you’ve helped us toward a shared understanding of what’s important and what’s less important as we move forward,” said Councilman Jeff Bragman.

Public engagement will continue, Mr. Van Scoyoc said. “We will be very active in the New Year on this topic.”