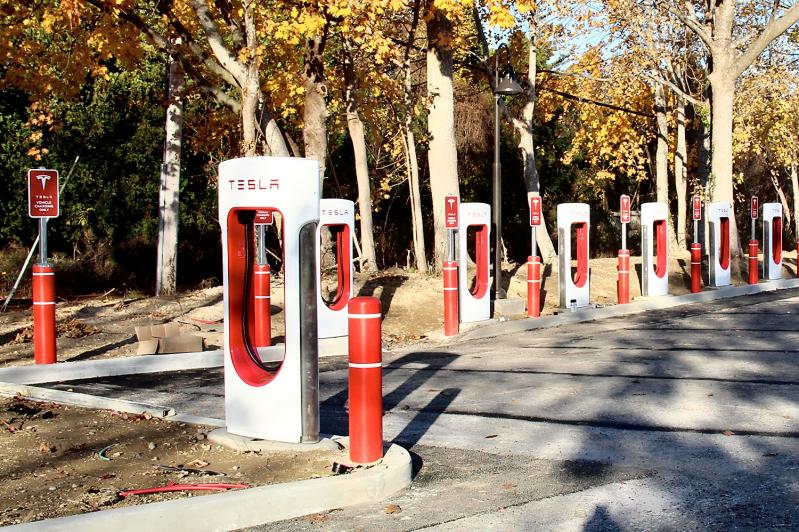 While East Hampton Village approved a deal earlier this year allowing Tesla to install 12 supercharging stations in a village-owned lot on Osborne Lane, it was only this fall that the stations went in.
Durell Godfrey
By Christopher Gangemi

The evolution of the village property at 8 Osborne Lane in East Hampton, wedged between the railroad tracks, the middle school, and another village property on the corner of Newtown Lane, entered a new phase recently as Tesla Motors Corporation completed the physical installation of 12 supercharging stations.

The parcel was purchased by the village in 2017 for $989,000. At the time, it held a small house, which was razed to provide a parking lot. That lot, with 21 parking spots, was meant to help alleviate the lack of parking in the village’s commercial business area. Construction on the lot was finished in the spring of 2019.

“The Osborne lot had been very underutilized since 2019,” said Marcos Baladron, the East Hampton Village administrator. Mayor Jerry Larsen “wanted to give it a purpose, and since we need more electric vehicle chargers in the village, we decided that would be the perfect spot.”

In April, the East Hampton Village Board approved the installation of the supercharging station.

The superchargers resemble large white rectangles with an oval opening in the center, lined with red, to which the business end of the charger is attached. Across the white top of the rectangle is the word TESLA in red capital letters.

Some might see the supercharger as a portal, perhaps into our fossil-fuel-free future, while others look at it as another harbinger of the end of village charm. Reactions may depend greatly on whether or not you own a Tesla.

“Visually it doesn’t bother me,” offered Sean Tyroler who lives nearby. “They are not great looking, but they’re not much worse looking than things I see in some of the gallery windows.” Later he added, “I’m hoping they are not illuminated from within. If they are, that sure would bother me, because they’d look like soda machines.”

Mr. Tyroler may prove disappointed. Images online show the supercharging stations lit from within, with light emanating from the Tesla logo down into the red charging well. As for other lighting around the lot, Mr. Baladron noted that a lighting plan is to be submitted by Tesla.

Apart from the aesthetics, there are concerns about how the lot will be administered. For example, if a Tesla driver lingers at the charging station for over an hour after their car is fully charged, they are fined by Tesla. But it’s unclear if that fine is like a ticket collected by the local police department, entering the village coffers, or if the fine goes to Tesla.

Another question relates to parking concerns. Since the lot was originally purchased to alleviate a parking problem identified by the village, how will the charging station, and its 16 parking spots now designated solely for electric vehicles, alter that equation? Does it make it easier for a Tesla to find a parking spot to the detriment of someone driving a conventional car? If a conventional car parks in a charging spot are they ticketed? By whom? The village police or Tesla?

Lena Tabori, owner of a Tesla and a member of East Hampton Town’s Energy and Sustainability Committee, praised the addition of the superchargers. “The idea that there’s a charging station in town is marvelous for people locally,” she said.

The superchargers are not yet operational. The main variable is the utility PSEG Long Island, which has to install a pole for the station. That installation could take up to a month. For now, it is expected the chargers could be up and running sometime in the middle of January.

Tesla is not paying the village for the spots. They are, however, “managing” the lot, and are responsible for “98 percent of the costs,” according to Mr. Baladron. Tesla also pays for all the electricity into the site. Those receiving charges for their cars pay Tesla for that charge.

The village is betting that by opening the supercharging station it will receive a good number of the estimated hundreds of thousands of Teslas that pass between New York City and Montauk each year. Since the supercharging station is within walking distance of many local businesses, they too stand to benefit. “We are hoping with the 30-minute charging time that drivers take a walk into the downtown or dine or spend at local shops,” Mr. Baladron said.

Ms. Tabori agreed: “The charging stations back right up to the retailers, so they should be happy about it.”

The more measurable and concrete financial benefit to the village comes from its deal with Electrify America, which, according to Mr. Baladron, will soon install five more brand-neutral chargers that can be used by any electric vehicle, not just Teslas. As stated on its website, Electrify America’s goal is to “promote zero-emission vehicle adoption by offering an ultrafast and convenient charging network.”

Those five spots are leased from the village for $200 a month providing the village with roughly $12,000 a year for the next 10 years at least. That deal was approved unanimously at the village board’s Nov. 19 meeting.

“The handicap spots are still available to any handicapped driver. We’re making this lot useful, and chipping away at the $1 million price tag. We consider this a big win,” said Mr. Baladron.