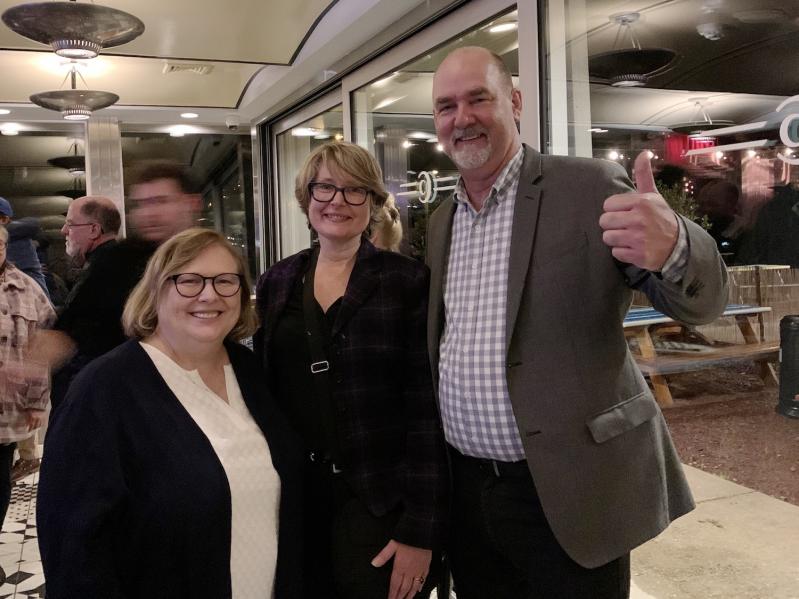 The Democrats Cate Rogers, left, elected to the East Hampton Town Board for the first time, with her running mates Councilwoman Kathee Burke-Gonzalez and Supervisor Peter Van Scoyoc, on Election Night.
Durell Godfrey
By Christopher Walsh

The Suffolk County Board of Elections issued the official results of the Nov. 3 election on Monday, adding the count of absentee ballots to the certified totals. There is no change in the outcome in East Hampton Town.

The nearly six-week delay between the elections and their certification was due to a hand count of ballots in Southampton, Southold, and Shelter Island Towns, officials said last week.

Mr. Bragman, a first-term Democratic town councilman, had challenged Mr. Van Scoyoc on the Independence Party line after the East Hampton Democratic Committee did not endorse him for re-election. He will leave government at the end of this year. Mr. Walles, a first-time candidate, ran on the Republican and Conservative Party lines.

Cate Rogers, the Democratic committee’s former chairwoman, was elected to the town board with 3,615 votes, 326 more than the unofficial result in November. Councilwoman Kathee Burke-Gonzalez was elected to a third term with 3,597 votes, picking up an additional 321 from absentees.

Ms. Rogers and Ms. Burke-Gonzalez, the Democratic and Working Families Party candidates, won with 29.02 and 28.87 percent of the vote respectively. Their Republican and Conservative challengers, Joe Karpinski and George Aman, were far behind with 1,958 and 1,801 votes, picking up 121 and 119 votes respectively to finish with 15.72 and 14.46 percent of the total.

John Whelan, the Independence Party candidate who sought but did not receive the Democratic committee’s endorsement, gained an additional 96 votes to finish with 1,488, or 11.94 percent of the vote.

Eight of nine incumbent town trustees were comfortably re-elected, with Rick Drew, who was also rebuffed by the Democratic committee in seeking its endorsement for re-election, running unsuccessfully on the Independence Party line. David Cataletto, a Democratic and Working Families Party candidate whom the committee endorsed instead of Mr. Drew, finished sixth among 16 candidates.

With 5,624 votes in the official tally, Jim Grimes won the most votes of any contested election and was a lone success in an otherwise emphatic defeat for Republican candidates in the town. But 3,643, or nearly 65 percent, of Mr. Grimes’s votes came on the Democratic Party line, the Democratic committee having cross-endorsed his candidacy. The remainder came on the Republican and Conservative lines. Mr. Grimes picked up an additional 442 votes in the official tally, winning a total of 11.07 percent of the vote. Francis Bock, the trustees’ clerk, was next with 4,173 votes, or 8.21 percent.

In winning a second term with 3,330 votes, Mike Martinsen finished in ninth place. His official vote total was 997 more than the top Republican candidate, David Talmage, who finished tenth. Mr. Drew finished last among the trustee candidates with 1,410 votes.

Ms. Rogers and Mr. Cataletto, the newly elected candidates, will be sworn in next month.

Turnout was low in last month’s elections, ranging from 27.41 percent in one uncontested contest to 33.09 percent in the supervisor’s race.