Retail sales and lounges not allowed for now 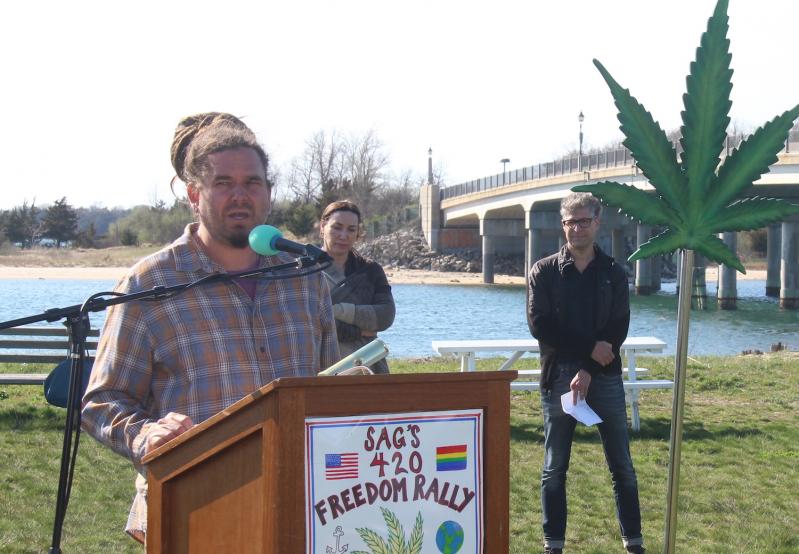 David Falkowski discussed the impacts of the state's marijuana legalization at a rally in Sag Harbor in April, this week reminded the Sag Harbor Village Board that the state's legalization was in part to "defeat the black market."
Durell Godfrey
By Christopher Gangemi

“I just don’t want this to be another product that I need to go to Riverhead to buy,” said a member of the public speaking about marijuana during a Sag Harbor Village Board meeting held via Zoom this week.

During its Tuesday meeting the Sag Harbor board heard the pros and cons of allowing marijuana, or cannabis, sales within village limits. Despite the vocal support of many callers who supported “opting-in,” the board unanimously voted against dispensaries and lounges, for now.

On March 31, the Marijuana Regulation and Taxation Act, or MRTA, was signed into law in New York State, legalizing adult-use recreational marijuana and setting out a framework for cannabis to be sold. The law allows villages and municipalities to opt out of sales should they so choose but reserves the right for them to opt in later.

Mr. Falkowski highlighted the state’s goal of regulating and taxing marijuana. He personalized the board’s vote, saying that if the village opted-out “it will basically close the door for me.” He added that “there are good people in this industry,” and warned that just because the village could choose to opt back in at a later date, there was no guarantee that the state was going to issue more licenses.

Mr. Falkowski suggested decoupling dispensaries from the “mysterious consumption lounge,” making the point that the village could reject the lounges separately.

Dave Schiavoni also spoke against opting out. “Prohibition never worked,” he said. He added that at least the village should get some tax money out of the sale of marijuana. “The drugs are here anyway,” he said.

Mayor James Larocca was quick to point out that the state has already determined that marijuana is legal. “What we’re discussing is whether we allow a dispensary associated with cannabis. The other thing that it allows the community to choose is if we will have a lounge.”

Adam Miller, an attorney speaking in favor of dispensaries, said, “My fear is fentanyl.” There have been some reports that marijuana is being laced with fentanyl, a powerful synthetic opioid. If the state were to regulate marijuana, the idea is that it would be a safer product than the marijuana currently sold on the black market.

Another caller reasoned that even if the village opted-in, it wouldn’t be a free-for-all. “If you opt-in, anyone who is trying to open one of these establishments would still have to deal with village regulation,” he said.

Rebecca Burnside, president of Safe in Sag Harbor an advocacy group seeking to reduce drug and alcohol use by teens, said, “I strongly believe that a dispensary in Sag Harbor would normalize the use of marijuana” for kids. She pointed out that the state not announced a plan to regulate sales yet. “We are asking for a pause so policy can catch up,” she said.

Ms. Burnside said that drugs can have developmental impacts on teens, who often “feel like they’re invincible,” and that teen use has gone up 23 percent in California since marijuana was legalized there. “We need to protect our Sag Harbor youth as best we can,” she said.

Kelly Dodds, also with Safe in Sag Harbor, seconded the call for a pause. A dispensary, she said, “is a new concept” and that there were many things that the state has yet to regulate. “There’s nothing to lose by opting-out now,” she said.

Dr. John Oppenheimer, who has a Sag Harbor practice, was concerned, “kids don’t understand how risky” marijuana use is, and that driving while high would be a big problem should dispensaries become common. “As far as I’m concerned,” he said, “we should never opt-in.”

“I’ve been tormented about this for a long time,” said Mr. Larocca. He indicated that it was not an easy decision for him to vote to opt-out, but that he felt it preserved the most options for the community. In the end, he said, he was very influenced by some of the arguments for opting out, including from Jeff Nichols, superintendent of Sag Harbor schools.

In closing, Deputy Mayor Thomas Gardella made the motion to opt out, and added that the village need to address public smoking in general.

“That’s a bridge we’re going to have to cross, sooner or later,” he said.