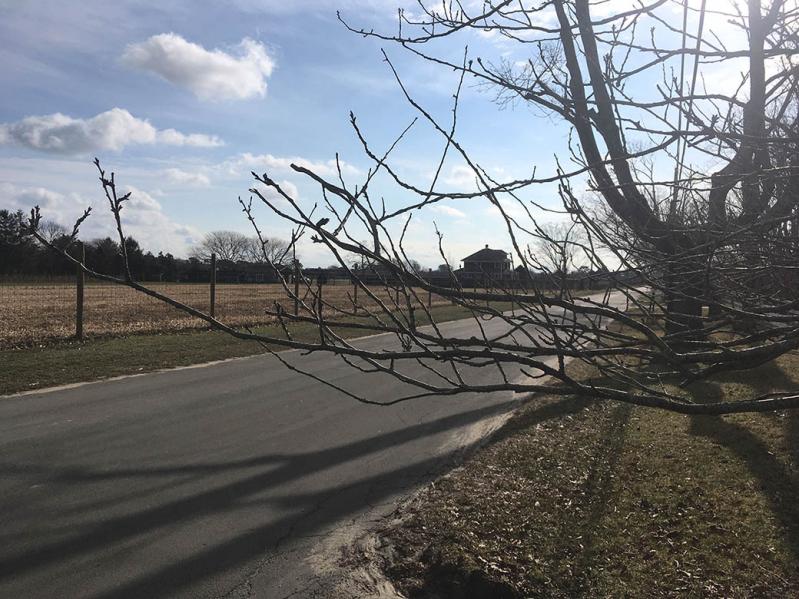 Opposition to an underground cable along Beach Lane in Wainscott has led to bitter divisions among residents and government officials.
David E. Rattray
By Christopher Walsh

Despite the lingering skepticism of one elected official and the opposition of some Wainscott residents, the East Hampton Town Board is poised to complete easement agreements with the developers of the proposed South Fork Wind farm. The easements, along town-owned land, will allow the wind farm's transmission cable to land in Wainscott and run along a path to the Long Island Power Authority substation in East Hampton.

On Tuesday, the board continued to debate the plan. The 132-megawatt installation, to be constructed in a federal lease area around 35 miles off Montauk, will deliver renewable energy to the electrical grid.

The town and town trustees, otherwise known as the "host community," have separately negotiated a lease agreement with the developers. The town will reap some $29 million over the wind farm's 25-year lifetime, and will also receive certain protections for the commercial fishing industry. Economic development will benefit as well, including establishment of a wind farm support facility and transfer vessel base in Montauk.

The State Public Service Commission is currently reviewing state-owned land and waters in the project for "environmental capability."  The developers, Orsted U.S. Offshore Wind and Eversource Energy, have also submitted a draft environmental impact statement to the federal Bureau of Ocean Energy Management, another among multiple regulatory agencies that must approve the project.

The proposed wind farm has undergone "exhaustive review" by the town board and trustees, Supervisor Peter Van Scoyoc said, citing "dozens of meetings with the public" at which the governing bodies heard concerns. "Over the course of nearly three years of negotiating these easement leases and host community benefits, we've enumerated no less than 150 places where the grantee shall have to comply with our regulation," he said. Outside counsel, experts in the fields of public service certificate and renewable energy, helped to craft the agreements and guide the town in protecting its interests, the supervisor noted.

"I personally didn't hear anything new" in comments made at the board's Jan. 12 meeting, which was dedicated to public comment on the wind farm, he said. "The vast majority" of callers to the virtual meeting "were calling in support of the project and urging us to move forward . . .  I believe personally we're at a point now where we should move forward."

Councilman Jeff Bragman, however, continued to urge his colleagues not to sign any agreement until Albany and Washington have approved the project, arguing that otherwise, the town will lose the considerable leverage it has to influence the final design. He raised a number of issues including the developers' $1.5 million damage deposit, which he said will cap liability at that amount regardless of the extent of damage. "They're permitted to have hazardous materials that they deem necessary in the course of their business," he said on Tuesday. "We have no idea what chemicals they may store or use."

The same is true, Mr. Bragman said, for the handling of contaminated soil, vegetation and animal habitat management, protection of water supply wells, soil erosion, and lighting, fencing, and access at and around the construction site.

Offshore, he said, the wind farm may adversely affect the important fishing grounds at Cox's Ledge, a potential impact far greater for the town than any related to the transmission cable. "We have tremendous leverage with the applicant if we don't sign the agreement at this premature point," Mr. Bragman argued. "And we could also monitor what's going on at BOEM. We could have a real voice in protecting Cox's Ledge, because we have the power to say we don't like it, we want a better plan. But we only hold that power as long as we hold off signing these documents prematurely."

Mr. Van Scoyoc and Councilwoman Sylvia Overby disagreed. The agreements, the supervisor said, are conditioned on successful completion of the P.S.C. and BOEM reviews. The easement, said John Wagner, an outside counsel to the town, "is structured such that if conditions are not followed, the easement itself will terminate." The developers would forfeit their legal right to maintain the cable within the town, he said, calling that provision "a pretty big stick" that will remain throughout the project's lifetime.

But residents of Wainscott remain concerned. Carolyn Logan Gluck, chairwoman of that hamlet's citizens advisory committee, compared the process to that of the hamlet studies that were recently incorporated into the town's comprehensive plan. In that effort, she said, residents felt engaged -- "Their concerns were not simply being listened to but acted on and incorporated. I don't think that's what's going on with this discussion about the wind farm easement agreements. It seems every time we raise questions, they go into a dark hole."

How long would the project be delayed if the town waited to sign the agreements until the P.S.C. has completed its review, she asked.

"I don't know," Mr. Van Scoyoc replied. "I don't know if the project would move forward." But Mr. Bragman said that "failure to have a signed agreement has not impeded this process."

Questions and comments have been heard, the supervisor said, and no new questions have been raised. Multiple questions raised in a Jan. 11 letter from the advisory committee will be answered, he promised. And "this easement is conditioned upon a successful [P.S.C. review], so I don't see a difference whether we sign it now or after" that review is complete.