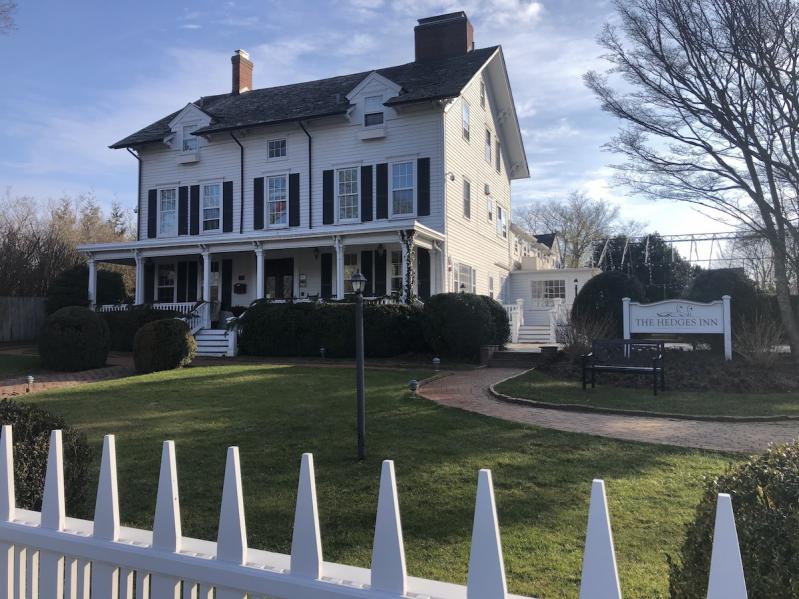 A State Supreme Court judge has ruled in favor of the Hedges Inn in a lawsuit.
Christine Sampson
By Jamie Bufalino

A provision of East Hampton Village law that prohibited its historic inns from holding special events outdoors or in tents was struck down by State Supreme Court Justice Martha L. Luft in a Jan. 6 ruling in a lawsuit the owners of the Hedges Inn, a popular wedding venue, brought against the village.

The suit alleged that the inn, a pre-existing business in a residential district, was illegally targeted by the law, which took effect in October 2018. "The enactment of [the law] constituted an illegal spot zoning . . . designed to benefit a single property owner," the suit said, referring to Peter and Patricia Handal, neighbors of the inn on James Lane, who had frequently complained to the board about noise and traffic created by events held there.

The village had regularly approved permits for special events at the inn, but in March 2018, a month before the board enacted the ban, it reversed course and denied tent permits for four weddings scheduled to take place that year.

In addition to nullifying the provision, the suit sought to annul a determination by the village's zoning board of appeals that upheld the permit denials, and asked for monetary damages because the law has rendered the inn unable to book special events. Justice Luft found the request to annul the determination in regard to the permit denials moot because, among other reasons, the events in question are no longer scheduled to take place. A final decision on whether to overturn the Z.B.A.'s determination, and a judgement on monetary damages, is pending.

The zoning code permits the use of tents for special events for 21 days per year in a residential district. By banning such events only at the inns, Justice Luft said, the village violated a state law that requires zoning regulations to be "uniform for each class or kind of buildings throughout each district." She pointed out that the village continues to permit outdoor events "at other properties in the same district, including a church, a farm, a library, and a historical society, even though none of those properties is residential."

The village argued that the law did not violate the uniformity mandate because all nonconforming businesses in the residential district were being treated the same. "The court finds the respondents' position untenable," Justice Luft said in response.

"We are very thankful that the court agreed with our arguments that the Hedges Inn was singled out unfairly and unequally from other properties in residential districts," Christopher Kelley, a lawyer for the inn, said in a statement about the decision. "We will now prosecute the rest of the case seeking damages for our clients' economic loss for not being able to hold outdoor weddings and other events over the last several years."

At a board meeting on Friday, Mayor Jerry Larsen said the ban, which was enacted by a previous board, "should have never been done to begin with," and the monetary damages the village may be liable for could be hefty. "These inns have lost three years' worth of revenue, so let's see what that's going to turn out to be," he said.

He and Beth Baldwin, the village attorney, are working on drafting legislation to replace the invalidated law, he said on Tuesday. The new code would be similar to the one in place prior to the ban, which required the inns to apply for special permits to hold an event. The number of events they would be allowed to hold per year has not yet been determined, he said.

Jenny Lilja, the Hedges Inn manager, said she is already receiving numerous requests for bookings. "I have brides who have been pushed off for two years, and they're dying to get married," she said.

Hoedown on the Farm, Cocktails in the Garden
Main Beach Free Concerts in Final Weeks
Services and Counseling After Death of Popular Teacher Assistant
END_OF_DOCUMENT_TOKEN_TO_BE_REPLACED