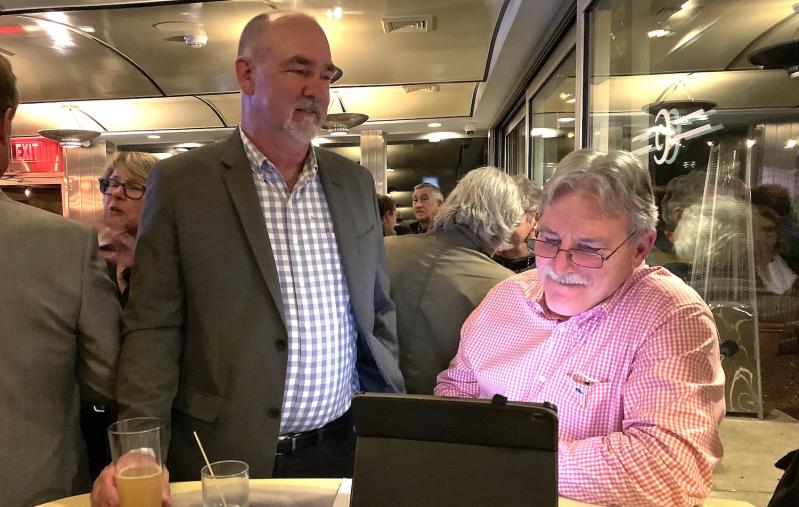 The polls had been closed for more than two hours when word was conveyed that there would be no further update to the Suffolk County Board of Elections' vote tally of East Hampton Town's 19 election districts, but the early vote totals indicated a clean sweep for Democrats. At nearly 1 a.m., when the board of elections website finally populated with all of East Hampton Town's unofficial results, those results held: The Democrats' candidates had won every contested town race from supervisor to town trustee.

Unofficial results gave Supervisor Peter Van Scoyoc 2,831 votes and his challengers Jeff Bragman, on the Independence line, 1,702, and Ken Walles on the Republican and Conservative tickets 1,504.

The successful town board candidates, according to Wednesday morning's numbers were the incumbent Kathee Burke-Gonzalez (3,276) and her running mate, Cate Rogers (3,289). The Republican and Conservative candidates Joe Karpinski and George Aman had 1,837 and 1,682 votes respectively, and John Whelan, the Independence candidate had 1,392.

But Democrats and their supporters gathered at Coche Comedor in Amagansett didn't know those numbers as they packed up to leave Tuesday night.

The board of elections "is telling us we don't have any further results because we don't have good cellphone service," Christopher Kelley, who managed the East Hampton Democratic Committee's 2021 campaign, told the crowd. A communication breakdown "with the people who are supposed to send the data in from the polling places" meant there would be no further update, and with the restaurant closing, the gathering was over.

"So all we have is early voting results," Mr. Kelley said. "With that being said, we're way ahead in the supervisor's race, the trustees race, and the council races."

With only early-voting numbers posted to the site and an unconfirmed report from a Democratic Committee member about Montauk's four election districts, Supervisor Peter Van Scoyoc was comfortably ahead of Councilman Jeff Bragman, his colleague on the board since both were elected to their present positions in 2017, and Ken Walles, the Republican and Conservative Party candidate.

There was anecdotal information, Mr. Kelley told the gathering. That came from Andy Harris, a committee member from Montauk, who asserted that Mr. Van Scoyoc led Mr. Bragman in that hamlet's four districts by a three-to-one margin. "We feel very confident," Mr. Kelley said, "but still, we don't have much to go on. So 15 districts that we don't know anything about. That's the good news, we feel good. But the bad news is, the bar is closing."

Ms. Burke-Gonzalez and Ms. Rogers, the former chairwoman of the East Hampton Town Democratic Committee, were also far ahead in the five-way race for the two seats on the town board that are up for re-election this year. Based on the early vote count, Ms. Rogers was leading with 1,301 votes, or 34 percent. Ms. Burke-Gonzalez was next with 1,198 votes or 31 percent. They led Mr. Whelan, chairman of the town's Zoning Board of Appeals, who had 540 votes, or 14 percent. Mr. Karpinski and Mr. Aman were far behind at 420 and 384 votes, or 11 and 10 percent respectively.

Mr. Bragman and Mr. Whelan, both Democrats, sought but did not receive the Democratic Committee's endorsement to run for town board. They forced a primary election, Mr. Bragman for the supervisor's nomination, and when they were unsuccessful, challenged their party's standard bearers on the Independence Party line.

Should the early vote count be indicative of the final tally, there will be little change to the composition of the town trustees, with eight of its nine incumbents leading their challengers.

Jim Grimes, Francis Bock, Susan McGraw Keber, Bill Taylor, Tim Garneau, Ben Dollinger, John Aldred, and Mike Martinsen are headed toward re-election, based on the early-vote totals. All but Mr. Grimes are Democrats, and Mr. Grimes is cross-endorsed by the Democratic Committee.

David Cataletto, a teacher at East Hampton Middle School and the Democratic Committee's candidate in place of Rick Drew, a three-term trustee who did not gain his party's endorsement this year, stood at sixth place among 17 candidates. Mr. Drew, who also ran on the Independence Party line, was in 11th place. By the time the results were updates on the board of elections website, Mr. Drew was in 17th place.

The official results of Tuesday's elections are also pending the board of elections' count of absentee ballots and certification of the totals.

Election Day followed a rancorous campaign between Mr. Van Scoyoc and Mr. Bragman, a reflection of their repeated sparring during the latter half of the four years each has served in his present position. At an Oct. 21 debate sponsored by the League of Women Voters of the Hamptons, North Fork, and Shelter Island, they disagreed sharply on issues including the future of East Hampton Airport and how to shape it; the South Fork Wind farm and the package of community benefits negotiated with its developers; electric vehicle charging stations and the South Fork Peak Savers load relief program; community choice aggregation, and emergency and cellular communications infrastructure in Springs.

The Democratic and Independence Party candidates for town board were almost in lockstep on issues, if the debates and a Conversations with the Candidates forum hosted by the East Hampton Village Preservation Society were any indication. In contrast to the candidates for supervisor, each was reluctant to criticize the other, instead speaking of their own achievements and agendas if elected.

The Republican candidates for supervisor and town board refused to take part in virtual debates, arguing that a debate could not be authentic in that format.