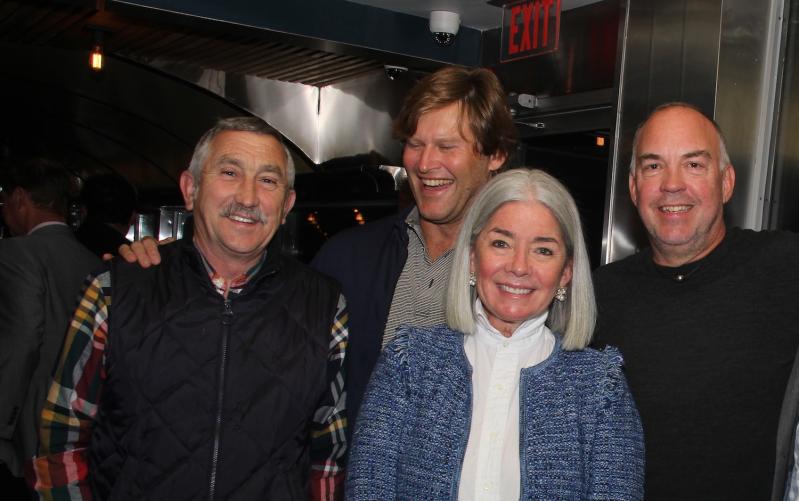 Celebrating what looked to be victory on Tuesday night were four of the Democrats' candidates for East Hampton Town trustee, including, from left, Jim Grimes, Ben Dollinger, Susan McGraw Keber, and Tim Garneau.
Durell Godfrey
By Christopher Walsh

There will be one new face among the East Hampton Town Trustees, who manage many of the town's beaches, waterways, and bottomlands on behalf of the public, when the nine-member body is sworn in in January.

In tandem with their colleagues on the town board, Democrats will retain eight of the nine seats, with the ninth member cross-endorsed by the Democrats, according to unofficial results from the Suffolk County Board of Elections.

The sole incumbent apparently defeated in a bid for re-election was Rick Drew, a three-term trustee who was rebuffed by the East Hampton Democratic Committee at its nominating convention in February. Mr. Drew, who won the East Hampton Independence Party's endorsement, finished last among 17 candidates. The Democrats instead endorsed David Cataletto, a teacher at East Hampton Middle School. Mr. Cataletto finished in fifth place among the candidates, according to the unofficial result, with 3,565 votes.

Jim Grimes, a three-term Republican who was cross-endorsed by the Democrats, finished far ahead of his colleagues and challengers with 5,182 votes. He is one of two deputy clerks on the trustee board. Francis Bock, the clerk, was in second place, with 3,819 votes, followed by Susan McGraw Keber with 3,666, Bill Taylor, the other deputy clerk, with 3,630, Mr. Cataletto, Ben Dollinger, elected in 2019, with 3,550. Tim Garneau, also serving his first term, got 3,504 votes, John Aldred got 3,160, and Mike Martinsen, another first-term trustee, had 3,018 votes.

In recent years, the trustees' role in the town's governing has shifted toward a greater focus on environmental issues, chiefly the remediation of impaired water bodies, where eelgrass has become scarce and the bay scallop population has experienced a near-total die-off for a third consecutive year.

Earlier this year, the trustees, along with the town board, negotiated agreements with the developers of the South Fork Wind farm allowing them to land the installation's transmission cable at an ocean beach in Wainscott. The trustees will share in the $29 million community benefits package the developers have pledged to the town.

Mr. Drew, perhaps the most active and engaged trustee during his three terms, took a skeptical view of the wind farm and its developers, a stance that may have been responsible for the Democrats' refusal to endorse his candidacy for re-election.

"I am disappointed that people appeared to 'robovote,' without an understanding of issues or candidates' qualifications," Mr. Drew said Wednesday. "It is unfortunate that there was no opportunity for debate and discourse during the trustee campaign season. I am proud of my service record as a trustee and to have participated in an open and free election this year. Thank you to the good people of East Hampton for the opportunity to serve you over the past six years."

In other local election results, four incumbents ran unopposed in Tuesday's election. They are Carole Brennan, town clerk, who had 5,384 votes; Stephen Lynch, superintendent of highways, with 5,001; Eugene De Pasquale, assessor, with 5,365, and Steven Tekulsky, town justice, who got 5,459 votes.