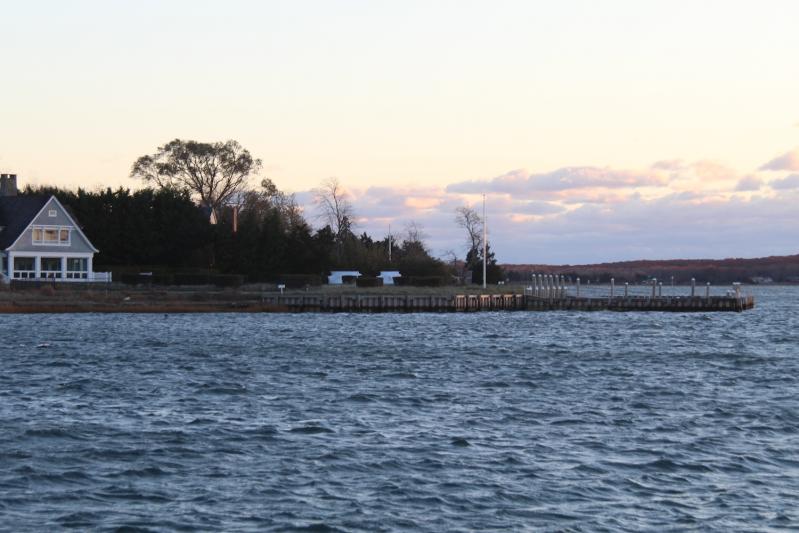 During the moratorium, the East Hampton Town Trustees will conduct an inventory of all docks in waterways under their jurisdiction, among them Three Mile Harbor.
Durell Godfrey
By Christopher Walsh

The moratorium, effective immediately, comes a month after the trustees voted 5-to-3 to approve construction of an 80-foot floating dock on Three Mile Harbor, the first such approval in more than three decades. That vote spurred the trustees’ clerk to instruct his colleagues to form a committee to study the matter and issue a recommendation.

The pause on new docks applies to residential property, and not to commercial properties or to duck blinds.

John McGinn and Cary Davis had long sought the trustees’ permission to construct a dock at their bulkheaded property at 275 Three Mile Harbor Road. The dock will require driving 13 pilings, each eight inches in diameter, into the bottomland.

In the debate over allowing that dock, some trustees had raised a concern that it would establish a precedent, leading to a flood of similar applications. Similarly, there was concern that exempting commercial properties would result in a torrent of applications from marinas.

On Monday, Christopher Carillo, the trustees’ attorney, tried to assuage those concerns. Some trustees are “gun-shy” in light of their approval, last month, of the residential dock, he said, but he reminded the trustees that they own the bottomland. “You guys have the absolute right to say no, or yes,” he said. It was not necessary to “dilute” the resolution by adding language emphasizing that the commercial exemption should not be construed as an invitation to submit new dock applications.

During the moratorium, the trustees are to conduct an inventory of all docks in waterways under their jurisdiction. Just prior to Monday’s vote, Francis Bock, the clerk, issued another charge to his colleagues. “What we’re about to endeavor is a very big project,” he said. “Probably the biggest thing to come out of this is an inventory of what’s out there, what’s permitted, what’s not permitted.” There are “quite a few” non-permitted structures, he said. “It will be up to the committee of each water body to work on their section to figure out what’s in there, and bring it forward for the harbor management committee to review. You’re making quite a commitment to this. I just want to make sure you’re aware.”

Susan McGraw Keber added that “I sincerely hope we will all divide this huge task evenly among ourselves.”

Mr. Carillo told the trustees of a minor update to the terms of the permit granted last month to construct the dock at 275 Three Mile Harbor Road. In lieu of the permittees’ seeding the harbor with oysters on their own or in conjunction with the town’s shellfish hatchery, they will make an annual monetary contribution to the hatchery’s existing seeding program that will add a minimum of 5,000 oysters in the greater Three Mile Harbor area per year for 10 years. The contribution will be $600 in the first year with an annual 2-percent increase, said John Aldred. The permittees are to provide an annual report to the trustees demonstrating compliance with their commitment.