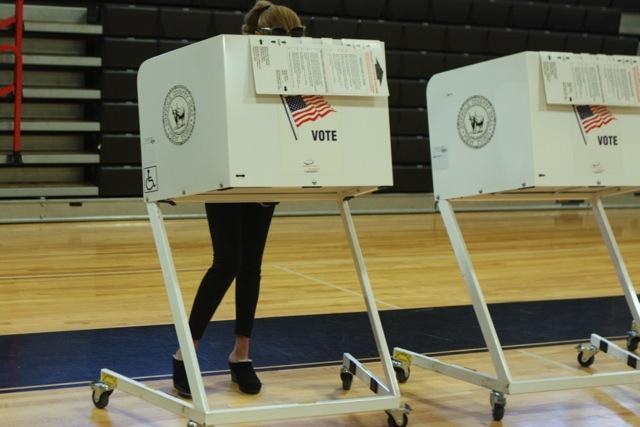 Voters will head to the polls on Tuesday.
Durell Godfrey
By David E. Rattray

With less than two weeks before the 2021 election was to be settled, the East Hampton Town Democrats had outspent their opponents by almost double and still had plenty left for a final push.

According to the Democrats' latest Campaign 2021 report, it had spent more than $28,000, on behalf of its candidates for East Hampton Town Board and trustees. The figure reflected the stakes of an election in which control of Town Hall was in the balance with the incumbent supervisor, Peter Van Scoyoc, seeking a third two-year term in office.

Most of the Campaign 2021 fund-raising activity was in the summer, with almost $100,000 coming in between July and the end of September.

Contributions to the Independence Party's East Hampton Town supervisor candidate, Jeff Bragman, perked up during October, with $13,000 coming in, compared to $2,250 during the summer.

Because town Democrats combine contributions into Campaign 2021, direct comparisons with competing parties' candidates are not available. However, based on disclosure reports available from the New York State Board of Elections, they trailed Mr. Bragman's fund-raising by nearly three to one in October. This did not come close to erasing Campaign 2021's massive financial advantage.

The East Hampton Town Republican Committee did not list any contributions or expenses after June 30. Ken Walles, the Republican and Conservative Party candidate for town supervisor, did not report to the board of elections.

A top contributor to the Democrats' aggregated fund was the owner of Gurney's Inn Resort in Montauk, George Filopoulous, who wrote a $10,000 check in August and the same amount in May, in a primary run-up.

Mr. Bragman had individual donors contributing $1,000 each, including David Gruber, who has himself sought the supervisor's job, and Leonard Ackerman, an East Hampton lawyer and behind-the-scenes political mover and shaker.

Mr. Bragman criticized the Democrats for accepting a $5,000 contribution from Steve Tuma, the president and chief operating officer of Sound Aircraft Services, which has sold fuel at the airport and provided passenger services at the East Hampton Airport for nearly 30 years at the same time as the town board was negotiating with him about the future of his business. Thomas J. Duffy, a pilot and Philadelphia lawyer who has a house in East Hampton Village, gave $2,000 to Campaign 2021 and $1,000 earlier in the year to the Committee to Reelect Kathee Burke-Gonzalez.

In a statement, Chris Kelley, Campaign 2021's manager, said, "I don't see how accepting a contribution from Steve Tuma, who reportedly has an interest, among other interests, in the status of the airport, is a problem, especially since we have received contributions from those who want to close the airport."

"Mr. Tuma's contribution of $5,000 should be viewed in the context of a campaign that has raised over $180,000 from contributors who have varied interests and opposing positions on a slew of local issues," Mr. Kelley said.

From July through October, Campaign 2021 reported spending $43,000, most which went to printing, graphic design, advertising, and postage costs. It wrote a check in October for $6,000 to the Hedges Inn in East Hampton Village for a fund-raising event.

The East Hampton Independence Party did not have any recent campaign finance reports available, nor did John Whelan, the party's candidate for town board. George Aman and Joe Karpinski, the East Hampton Republican candidates for town board, do not appear in State Board of Elections disclosure records.