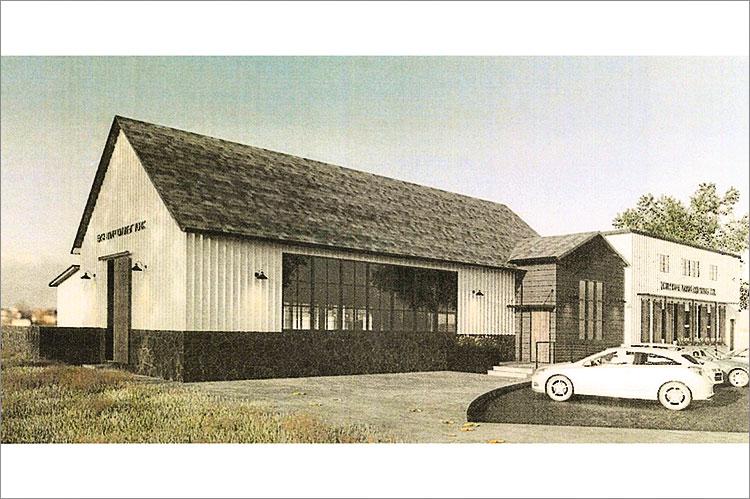 A rendering of a brewery and restaurant proposed for Toilsome Lane in East Hampton. "They have a nice concept, but it's in the wrong place," said Michael Aaron, who is trying to prevent the facility from being built next to his house.
Chaleff and Rogers Architects
By Jamie Bufalino

Two residents of Toilsome Lane in East Hampton Village are trying to prevent a brewery from being built next door to their house by contesting a determination by Thomas Preiato, the village's chief building inspector, that such a use is permitted on the property.

Christopher Diamond, a co-owner of Mill Hill Realty Corporation, plans to build a 7,465-square-foot, two-story brewery and restaurant at 17 Toilsome Lane, and has applied to the design review board for site plan and design approval. The facility would have a 140-seat capacity, and contain a brewery and kitchen on the ground floor, dining and tasting areas on the second floor, and an outdoor beer garden in back. Sixty-three parking spaces are proposed for the site, and vehicles would enter from the eastern side of the property and exit from the western side.

The property is the site of a long-vacant former furniture warehouse. It is zoned for manufacturing-industrial use, but lies in a predominantly residential neighborhood.

During an initial review of the application at a D.R.B. meeting on Aug. 3, Mr. Preiato told the board the proposal would not require a zoning variance because, according to the village code, both a brewery and a restaurant are permitted uses in a manufacturing-industrial district.

Michael and Christine Aaron, residents of 19 Toilsome Lane, the property adjacent to the site, oppose the project out of concern about the traffic, crowds, and noise it could bring to the neighborhood. Several other residents raised similar concerns at the D.R.B. meeting. "The traffic issue is absolutely frightening," Mr. Aaron said, noting that the street is already so heavily-trafficked that it often takes him five minutes to pull out of his driveway. The prospect of people exiting from the brewery's parking lot and making a left turn onto Toilsome Lane would make the street particularly unsafe, he said. "Cars come out of nowhere, that would be disastrous."

Mr. Aaron, a former chairman of the Sherry-Lehmann Wine and Spirits store in New York City, said that, in order for the brewery to be successful, the owners would have to "keep it flooded with people," which would be detrimental to the neighborhood, as would the proposed beer garden. "Everyone I've spoken to told me that at beer gardens the noise becomes excessive," he said. "Something like that belongs far away from a residential neighborhood."

On Sept. 22, Michael G. Walsh, a lawyer for the Aarons, filed an appeal on their behalf with the village's zoning board of appeals that challenges Mr. Preiato's interpretation of village code as it pertains to both the restaurant and brewery components of the proposal.

A restaurant may be a permitted use in a manufacturing district, Mr. Walsh said in an interview last week, but the village code says that "a restaurant shall not be construed to include . . . any form of tavern."

"What you have here is clearly a brew pub restaurant," he said. "The most substantial part of the use is the sale of ale or beer."

At the D.R.B. meeting, Mr. Preiato said that a brewery is considered "light manufacturing" and an "obvious" use for the property, but Mr. Walsh also took issue with that analysis. Village code does not address breweries, he said, but, according to federal guidelines, they are not considered a manufacturing use. "Just because you have a craft brewing machine, that doesn't make you Anheuser-Busch," he said.

Mr. Preiato's assessments have become the focus of the appeal, Mr. Walsh said, "because they gave this project a green light," and they hold just as much weight as a ruling from the Z.B.A. New York State law allows a zoning determination to be appealed within 60 days. According to the law, the Z.B.A. must hold a hearing on the appeal, and, after that takes place, it has 62 days to render a decision on whether the determination should be upheld.