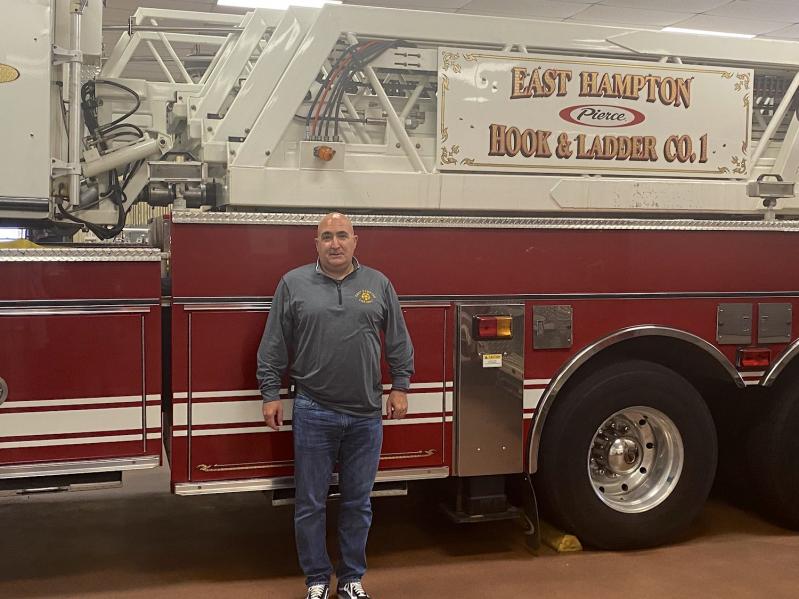 Burdened with outdated fire trucks for more than a decade, the East Hampton Village Fire Department will soon have the most state-of-the-art equipment on the East End now that the village board has approved the $4.5 million purchase of five new vehicles, according to Fire Chief Gerard Turza Jr.

The tower ladder truck the department is now using has been in operation since 2002, and it is in constant need of repairs, Chief Turza said. "We were using it in a drill last October, and we had a problem with a nozzle, and the mechanism that allows the truck to rotate failed," he said. The truck gives firefighters access to the upper floors of multistory buildings, and was a critical part of the effort to battle the Sag Harbor Cinema fire in 2016. After it malfunctioned, it was out of commission for five months, and, during that time, the department had to use a truck on loan from the Sag Harbor Fire Department.

The new truck will have a ladder that is five feet longer than its predecessor's, a thermal-imaging camera attached to the aerial platform rather than the truck itself, and rear wheels that turn, a feature that will make it far easier to respond to house fires. "We go into these tight driveways and you can barely get a vehicle in, but the new one can really maneuver," said Chief Turza. All of the new vehicles' exteriors will have high-visibility striping, and improved lighting. "The biggest complaint I've gotten from companies over the past five years is that we've got to upgrade the lighting," he said. "There's standards and requirements for the lighting, and the old trucks just don't meet them." The trucks will also all have the same cabs, chassis, motors, and crew compartments. "That will make it easier for serviceability and exceptionally easier for cross training," he said. "Now every driver will be capable to drive every truck, so the versatility will be built in, which is huge."

The department's hose truck, which traditionally works in tandem with the ladder truck, has been in use since 1997. It has the capacity to pump out 1,500 gallons of water per minute. "That was a lot at the time, but our water main sizes are increasing, and the water distributions systems have changed drastically, so all the pumps on the new trucks will be 2,000-gallons-a-minute, the highest rating you can get," Chief Turza said. "We need to get every drop of water we possibly can, and every new truck will have the same size pump, so no matter what truck it is, it can supply the tower ladder."

The existing brush truck has an antiquated braking system and a faulty transmission. "The last few fires that we had in the woods, there were major problems with it," Chief Turza said. The new one will have four-wheel drive, "which is good because on houses in the Northwest Woods, there's like a mile of driveway, it's winding, and there might be snow, so I'll be able to easily get up there with that truck and start operations."

The heavy rescue truck, which has been on the road since 1994 and which Chief Turza has been eager to replace since 2013, has an outdated electrical system that cannot provide enough power to operate extrication equipment such as the "jaws of life," used to remove passengers from car wreckage. Fire crews keep a stash of battery packs in the cab to power the devices. "This is a critical piece of equipment for us -- this is a life or death truck," he said. "It served its purpose well, but we need a new one because God forbid there was some type of catastrophic accident, then it's going to come up, 'Why did you have a truck that's so old?' "

The department will also be getting an extra engine so that one can be stationed full time at the Northwest substation. "That's going to help us tremendously because this place is gridlocked," said Chief Turza, referring to the section of Cedar Street that runs in front of the Emergency Services Building. The new engine will come equipped with 4,000 feet of hose, and eight air tanks.

As part of the village's five-year capital plan, Chief Turza had also requested the purchase of an airport crash truck, but he decided to hold off on that order "because there's a lot of uncertainty about what's going to happen with the airport, and a truck like that is $1 million."

It will take about 18 months for the new trucks to be built, he said, but, once they arrive, the department will be in peak form to protect the 31 square miles of its coverage area. For that, he is grateful to the village board. "The stars all lined up, because all five members of the board are behind us," he said. "They understood the problems, and then it was just a matter of how can we make it happen."