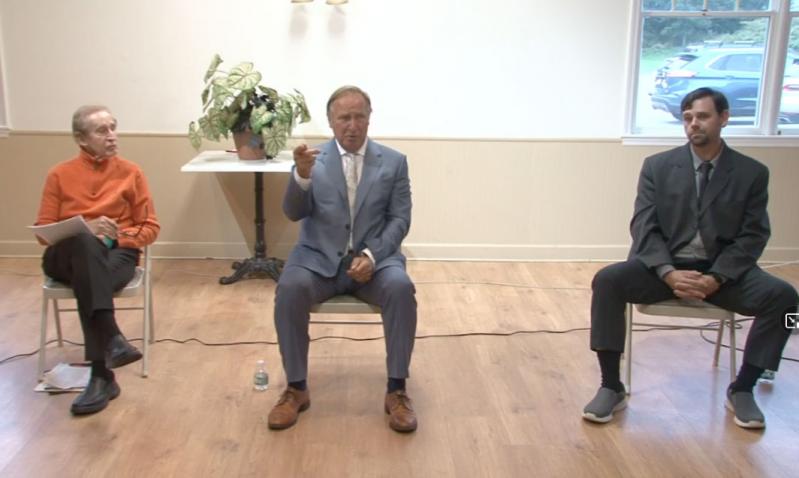 George Aman and Joe Karpinski, who are the Republican Party candidates for East Hampton Town Board, flanked Ken Walles, its town supervisor candidate, at a voters forum in Amagansett on Sunday.
via LTVEH.org
By Christopher Walsh David E. Rattray

The Republican and Conservative Party candidates for East Hampton Town supervisor and two council member posts held a forum for voters on Sunday at the American Legion Hall in Amagansett, where they made a case for their candidacies and leveled a broad critique of the present administration.

"We believe in open government, an open-door policy," said Ken Walles, the candidate for supervisor, suggesting that the current administration does not. He and his running mates are "here for the community. We're not here for special interest groups." He called his management style "open, honest, fair, and it's for you. We're all in this together."

He criticized the town board under the present Democratic administration, saying it was "reactive rather than proactive," a result of a "complacent attitude in Town Hall."

"I also don't like the last-minute scrambling because it's an election year," he said. "It seems like they are trying to attack every issue that's outstanding, that's been outstanding for the last eight years, to make it look like they are doing the right thing. Nothing gets resolved." The town board "should focus on achieving goals, not just on hashing things out month after month after month."

At another point in the discussion, he noted, "Get rid of the divisiveness; that's where it starts."

Joe Karpinski, who is running for town board, also criticized what he said was the board's inaction on multiple initiatives. "Where is that senior center?" he asked. "We are on the third site and they just bought the land. It hasn't been built. Every time we have an election, it's always 'Here comes the senior center.' Where is it?"

He was similarly disparaging of the delay in completing the town's emergency communications infrastructure, with the site for a communications tower in Springs still undetermined. "That is a communication tower that is vital for our first responders and firefighters," he said. "If I would tell you here today that, 30 feet apart on the road, you have firefighters at an active fire and they have to shout orders to each other, how can you let that go on for six years?"

Mr. Karpinski scolded elected officials for failing to appear at civil disobedience events at what is popularly known as Truck Beach on Napeague. "That beach should have been our beach no matter what," he said of the 4,000-foot stretch over which landward property owners successfully asserted their ownership in decade-long litigation. "We were not adequately defended in court, not one iota, by this current administration or the attorneys that they put out there to defend our rights."

George Aman, a former principal and superintendent of the Amagansett School, referred to a special meeting, scheduled for Tuesday but later postponed due to the northeaster, that was devoted to school districts' difficulty in attracting and retaining teachers "because of the distance that they have to travel if they don't live here, and the cost they have to pay if they do."

Newly graduated teachers can often find a position in the town for that reason, Mr. Aman said, but the cycle inevitably repeats, he said, as they often seek work UpIsland once they have gained a few yearsÕ experience and recommendations. "Now," he said, "they move because they are tired of the long commute, or the high cost of living here. The school district feels it so strongly that they are having a separate meeting just to discuss that issue."

He also criticized what he said is a lack of exercise opportunities for senior citizens, particularly during the Covid-19 pandemic.

The candidates each expressed skepticism about the South Fork Wind farm and other Orsted and Eversource Energy projects to be sited in the Atlantic Ocean, as well as about wind power generally. For Mr. Aman, the chief concern was about cost and that answers about the price of electricity when these projects go online were not being provided. To help make his point, he brought his most recent PSEG bill with a kilowatt-hour cost of 21 cents. "You cannot get them to say it will go up to 25 or 30 or 35, they will not say the projected cost," he said, pointing out that even if a number were available, it would probably be a lowball figure.

Mr. Karpinski said that regulators should slow the process to wait for new technology, including small units set up by homeowners. "We're on an island. Wind is perpetual on an island. Why wouldn't you put something on land instead of over the water?" he said. Mr. Walles said that land-based turbines were preferable: "Don't have to deal with those hideous wind farms and the cables."

Speaking about Montauk summer crowds, Mr. Walles explained that he favored the town getting tougher. "I said last year to somebody, Montauk is like, you dress it up, you get it ready for the season, and it's like you have a grand-opening sale for Antifa. They come in, they destroy it."

"Nobody says, 'Let's make it more manageable; other people have to live here.' It can't just be one free-for-all, and we have to make all East Hampton like that." In answer to a question from an audience member, Mr. Walles said he wanted the town to use its budget surpluses more wisely. The community preservation fund might be tapped for other purposes, but he did not "want to get in trouble like Bill McGintee did," referring to the misappropriation of money to cover budget gaps under the former supervisor.

Mr. Karpinski cited his asking the town planning board about requiring bonds for site remediation for erosion-control geocubes and other hard structures. "It was one of my greatest accomplishments so far," he said, promising to continue his advocacy if he did not get elected.

"What's going on with our environment? What's going on with the world today? What are we really leaving for our children and grandchildren?" Mr. Walles asked. "We've got to focus on our own community and making sure that we are healthy, the community is healthy, and that we, as individuals, can grow to be healthy."